This paper has been written by Dr Simon Duffy of the Centre for Welfare Reform in response to a discussion by colleagues at the Socialist Health Association who wanted to identify the line that local authorities should take in the light of the latest wave of NHS reorganisational changes: the development of Accountable Care Organisations (ACOs).

There is no copyright on this paper nor any responsibility to cite the author. It is offered to campaigners, health activists, local councillors and leaders within the NHS for amendment and improvement. Please use it any way that is likely to advance the cause of justice and democracy.

Also, if you want to suggest improvements to this paper please contact Simon Duffy directly.

Instead of Accountable Care Organisations

The NHS in England is being reorganised, yet again. Jeremy Hunt and his advisors have decided to turn upside down their own previous reforms. Now commissioning organisations (CCGs) and service providers (NHS Trusts) will be brought together into large Accountable Care Organisations (ACOs). How this will work in practice is not clear and rightly there have been calls in Parliament to scrutinise the changes. A coalition of health campaigners, including Stephen Hawking, are also trying to take the Government to court to stop these plans.

In one minimal respect these changes are positive, for they could mark the end of the era of the internal market and commissioning. The Government’s austerity programme and the cuts, not just to the NHS, but in particular to social care, have further undermined the ‘purchaser-provider split’ and the complex tariff arrangements that are used to fund NHS service provision. Now, as demand rises, and real funding falls, it makes no sense to continue with this pseudo-market model, one that has dominated the NHS since 1992.

However the threat of continuing privatisation to the NHS continues. In fact the term ACO is an American term which is used to describe an insurance-based model for funding healthcare, one which is generally associated with low quality and highly rationed care. It is entirely feasible that the NHS is being parcelled up into large chunks which can then be taken-over by US companies for profit. Even if this does not happen immediately there is every sign that these new arrangements will worsen the quality of the NHS:

Even if ACOs are not privatised they are certainly likely to adopt the kind of heartless rationing and contracting systems adopted by US companies to control costs. They will be so out of touch with real communities that anything more human or positive is not available to them.

Inevitably central government will try to reassure the public that they do not intend to do any of these things. They will likely talk about 'working in partnership with local communities', increased 'personalisation', 'asset-based approaches' and addressing the 'social determinants' of health. But, after seven years of austerity and regressive social policies none of these reassurances are remotely credible. Taking money, power and authority away from local communities and away from local government will only reduce local influence on the NHS. Austerity is a policy of central government and further centralising the NHS further will only make things worse.

Despite the lack of any clear democratic mandate, any clear policy and any legislation, there remains considerable momentum behind the drive from Whitehall to reorganise existing NHS organisations into ACOs.

So this short paper tries to offer some provisional answers to just two questions:

The first urgent priority must be for all those who care about the NHS and its future to make clear, at every opportunity, that they are opposed in principle to the development of ACOs, for the following reasons:

In particular, it is surely the duty of local government to reject this shift in policy and to refuse to cooperate with plans to establish ACOs (or similar non-statutory regional bodies).

Most of us who want to defend the NHS are united in wanting to see an end to the era of internal markets, privatisation and commissioning. However this does not answer the question of how we would like the NHS to be organised instead.

Even prior to 1992, when the era of commissioning began, the NHS has had a history of being constantly and pointlessly reorganised by Whitehall and London-based politicians. We all want a National Health Service - but not every decision can or should be made in London by a bureaucrat or politician. The NHS is one of the largest and most complex organisations in the world. Decisions need to be made at many different levels and in many different contexts, by citizens, professionals and democratic bodies.

To begin with we need to reflect more deeply on the principles that should underpin the long-term organisation of the NHS, and so I am going to propose 5 broad principles:

Democracy and the NHS

If these are the right principles then our goal over the long-run must be to push for significant positive reforms to apply these principles and to protect the NHS and strengthen its status as part of our common inheritance.

In outline the following steps for positive reform can be envisioned:

1. Constitutional reform - The right to free healthcare for all should be a constitutional right, protected not just by law but by further constitutional measures that would limit the ability of politicians to interfere unduly in the principles of the NHS or in the structures of local government. Such rights could be established alongside other economic and social rights - rights which the UK has signed up to internationally - but which it currently does not respect at home. Under the current administration the prospects of fundamental and positive change may well be very poor, but looking to the future it is quite possible to imagine changes in the constitution of the UK that would better safeguard the NHS and our social and economic rights more generally for the future.

2. Democratic control - Central government must guide overall policy and help define the general rules within which local people work. However there is no reason why people in different areas cannot make their own decisions about how they want to organise health care in their own communities. Developing a strong and sustainable welfare state means working through and with citizens and ensuring democratic accountability.

4. Stable local structures - Ideally the NHS would be organised around a stable configuration of local government boundaries and one that allowed for regional, local and neighbourhood levels of discretion, with suitable democratic structures at every level. However, currently local democracy in the UK is very weak and needs to be improved. Until better systems are developed the NHS must be organised around existing local authority boundaries. Any plan to make decisions at a level larger than the local authority - let's call this an Area level - should only be possible with the explicit agreement of all local authorities within that area. It is totally unacceptable that NHS structures can be gerrymandered by Whitehall. Local authorities must agree to the creation of any area or regional structures that includes them.

6. Management - Taking on the role of overseeing local health services is complex work and so a proportion of the significant existing resources currently spent on management within the NHS should be shifted into the direct control of local authorities.

7. Legality - Until any new statutory body, like an Area Health Authority, is created then the primary responsibility for delivering NHS responsibilities must lie with either an existing statutory NHS body or a local government body. There should be no risk that the management and over-sight functions are delegated to some non-statutory body which can be privatised or can avoid direct democratic scrutiny.

Although many of these potential reforms would certainly not be supported by the current Conservative Government it is not clear that other political parties would not support these principles. In fact several Conservative MPs are showing signs that the creation of ACOs is one crazy reform too far.

Nor is there any reason why local councils could not adopt some of these ideas a goals as part of their negotiations with the NHS, whatever the pressures from Whitehall. Currently Health & Wellbeing Boards are supposed to act as the guarantors of locally defined plans and appropriate shared accountability between the NHS and local government. In the short-run it should be these bodies who decide how local services are organised.

Shifting power away from local authorities and towards bureaucratically defined and unaccountable areas will do nothing to improve the NHS or to resolve its funding problems.

A short note on social care

Clearly the current crisis in funding, which particularly targets social care and local government, is caused by the ideological commitment of the Government to drive down the level of public spending. This is putting the current system under tremendous strain. However this is not a reason to shift adult social care into the hands of the NHS. Instead local government must insist on their right to play its part in ensuring that local healthcare systems are designed to respect the rights and needs of local people.

Local government must not become a bystander, watching on as the NHS is pushed through another wave of chaotic organisational changes, instead it should be the champion of the interests of local people.

The idea that the NHS should be democratic and more accountable at a local level has been around along time. In fact it is, as I understand it, the policy position of the Socialist Health Association. However the debate about a more local NHS was derailed by the 1992 market reforms and since then the drift of policy has been to increased bureaucratisation and to central control.

Personally I think the Labour Party's new stance, committing itself to the full renationalisation of the NHS, is entirely correct. I am hopeful that the era of mindless neoliberalism and meritocratic top-down management is finally tottering (if far too slowly) to a close.

So now is an excellent time to start thinking about the kind of NHS we really want.

We certainly want end to the crazy market systems; but surely we do not want to go back to an era of centralisation and to constant reorganisation. Perhaps it is time to consider entrusting the NHS to us - the people.

These ideas reflect a long tradition of human rights developments around the world. These publications may be of interest:

Potts H (2008) Participation and the Right to the Highest Attainable Standard of Health. Colchester: Human Rights Centre, University of Essex.

Potts H (2008) Accountability and the Right to the Highest Attainable Standard of Health. Colchester: Human Rights Centre, University of Essex.

Health Efficiencies This report describes the efficiencies possible in healthcare through the use of personalisation.
Article: 15.03.11

Active Patient Vidhya Alakeson's Policy Paper sets out the case for extending the principles of self-direction, and in particular…
Paper: 31.05.12 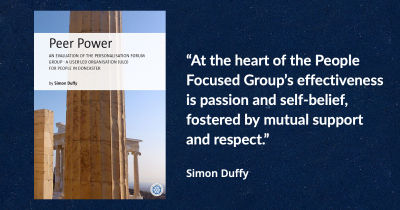 Peer Power Simon Duffy explores the inspirational work of the Personalisation Forum Group and its efforts to improve their own…
Paper: 23.01.13

The Politics of Assets Based Public Health Dr Lynne Friedli argues that we must not forget the impact of poverty and injustice on health and well-being.
Paper: 24.05.12

Social Prescribing for Mental Health A guide for commissioners on how to enable social prescribing, offering new opportunities for people with mental…
Inspiration: 12.06.11

WomenCentre Model WomenCentre has worked out how to integrate personalisation and collective action in a sophisticated and dynamic…
Review: 04.01.11

Turning the World Upside Down Nigel Crisp describes why western, developed countries have much to learn from developing countries who have had to…
Paper: 02.08.16 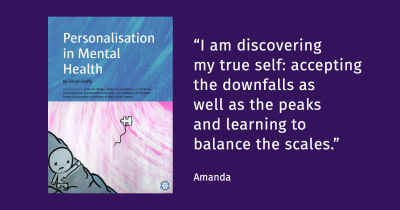