Turning the World Upside Down

Nigel Crisp who used to run the NHS, one of the largest organisations in the world and the pride of the UK welfare state. However, after some years working with developing countries, he has written a book which describes some of the critical flaws at the heart of the current system. 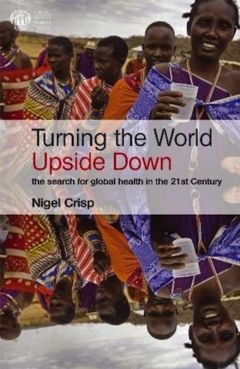 He observes, if we are really interested in improving global health, then current western practices are wrong: we export our ideology - that the state and professionals know best - and we import their doctors, nurses and health professionals to work in our health care systems. What we should be doing is the opposite: we should import their growing awareness that health is created by citizens and communities and we should export our best people to share some of our technical expertise.

The book is full of interesting insights and perspectives. He describes how the process of giving aid can seriously damage the infrastructure of developing countries. Western perspectives, the needs of western suppliers, the power of western experts dominate - and they also compete with each other - generating a mess of externally imposed 'charity'. It is interesting to note that this kind of continuation of western colonialism is even mirrored in the relationship between central and local government within the UK: central government not only dominates local delivery, but it does so in a confused and chaotic fashion.

The book is full of interesting examples of positive practice in developing countries. Their models for delivering health care have had to support local and citizen capacity - there is no opportunity for the wasteful and paternalistic practices that have developed in the west. Sometimes this leads to outcomes that are even better than those achieved by expensive western system alternatives. He quotes from a report on mental health:

These findings [better long-term outcomes for schizophrenia in developing countries] still generate some professional contention and disbelief, as they challenge outdated assumptions that generally people do not recover from schizophrenia and that outcomes for western treatments and rehabilitation must be superior. However, these results have proven to be remarkably robust, on the basis of international replications and 15-25 year follow-up studies. Explanations for this phenomenon are still at the hypothesis level, but include (1) greater inclusion or retained social integration in the community in developing countries, so that the person retains a role or status in the society; (2) involvement in traditional healing rituals, reaffirming community inclusion and solidarity; (3) availability of a valued work role that can be adapted to a lower level of functioning; (4) availability of an extended kinship or communal network, so that family tension and burden are diffused, and there is often low level of negatively 'expressed emotion' in the family.

Interestingly he also sees the connection between the fight for independent living, individual budgets and personalisation and the emerging crisis within western medicine. The current system is unsustainable because it creates increased need and dependency while wasting human and financial resources. What is needed is a system which sees the patient as an active citizen. As he says:

Patients are at the centre, not because health professionals have placed them there or empowered to be there and not because a politician or policymaker had adopted this as a smart slogan. It is because in reality their decisions, actions and beliefs determine what happens most but not all of the time.

The publisher is The Centre for Welfare Reform

Review of Turning the World Upside Down © Simon Duffy 2011.

Active Patient Vidhya Alakeson's Policy Paper sets out the case for extending the principles of self-direction, and in particular…
Article: 18.10.11

NHS Values & Personalisation This short essay describes how to face some of the fears raised about the application of personalisation within the…
Film: 24.03.11

Active Patient Vidhya Alakeson of the Resolution Foundation describes how personalisation and the use of individual budgets in…
Paper: 15.10.09

A Healthy Choice? Direct Payments in the NHS This article sets out the case for extending Direct Payments or other forms of self-directed support to the health care…
Inspiration: 01.09.10

Decision-Making in Health When our life is threatened and real expertise offers us some possibility of extending or improving our life then it…
Graphic: 01.08.09