The Unmaking of Man

This book was originally written in 1995, but it has remained unpublished for many years as I worked on other projects. Now it has been revised and is published for the first time. 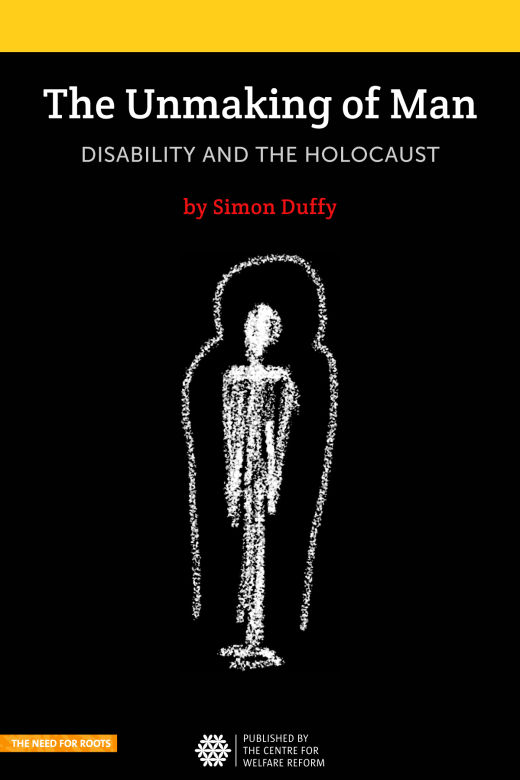 The book also marks the opening of a new phase of work for The Centre for Welfare Reform - a programme of enquiry called The Need for Roots. Together with John O'Brien, we hope to encourage thinkers from many fields to collaborate to better understand how to reconcile the fundamental equality of all human beings with an appreciation for the value and wonder of human diversity. Most modern moral and political theories seem to treat diversity as a problem - but we see it as a gift - and we want to explore how communities can recognise that gift.

The Unmaking of Man does not offer all the answers to that question. However it does cast some light on some of the darker parts of human history, and for me it is where much of my own thinking began. Reflecting on the Holocaust - its horror and its causes - has been helpful in clarifying what it is we need to fight against and what is worth fighting for. In his Foreword to the book John O'Brien writes:

Many people have benefited from Simon’s gift for designing straightforward approaches to reforming the delivery of publicly funded supports and providing clear and memorable reasons for implementing them. These essays, written in 1995 and edited for release as the first in the Centre for Welfare Reform’s The Need For Roots series, provides an essential resource to anyone who wants to understand his thinking. Those working to implement self-direction, those organizing individualised supports with the aid of The Keys to Citizenship, those using the contrast between the Gift Model and the Citizenship Model to criticise and re-shape policy will find an important branch of the root system for these useful ideas and practices here.

The content of the book is dark. It describes how disabled people were not just swept up in the Holocaust but were in fact the first group marked for destruction by Nazi Germany. It outlines some of the parallels between the experiences of people with disabilities and other oppressed groups, especially the Jews. It goes on to describe how the factors that led to the Holocaust are still relevant today.

This is uncomfortable stuff. We like to sweep the Holocaust and eugenics into 'the past' and to hope all of that horror is done with. But sadly this is not true. As Hannah Arendt writes:

We can no longer afford to take that which was good in the past and simply call it our heritage, to discard the bad and simply think of it as a dead load which by itself time will bury in oblivion. The subterranean stream of Western history has finally come to the surface and usurped the dignity of our tradition. This is the reality in which we live. And this is why all efforts to escape from the grimness of the present into nostalgia for a still intact past, or into the anticipated oblivion of a better future, are vain.

All of this is controversial. Discussion of the Holocaust is often seen as unnecessarily extreme and many people are uncomfortable with seeing any parallels between something so evil and any contemporary events. There is a double fear, both of exaggeration and, even worse, of somehow underestimating the dreadfulness of the Holocaust itself. Of course this is not my intention.

We need to remember that social factors - rightlessness, unemployment, economic insecurity, stigma, rootlessness and isolation - underpinned a collapse in moral values and decent behaviour. Of course history never repeats itself - exactly - but it is naive to think we have progressed to such an extent that we cannot also fall into the same morass as Nazi Germany. The form our own moral failure might be different; it will certainly be informed by all our modern scientific knowledge. But as the Holocaust also teaches us - technical progress is no guarantee of moral progress.

The book is not a prediction of the future, but it is a warning. In 1995 many of my worries seemed more extreme, today in 2013 those worries seem much more reasonable. Today we see political leaders use the language of stigma and scapegoating and we see many people accept and even welcome the 'blame game'. We must not go down this path. As John O'Brien also says:

Readers will come away from studying and arguing with these essays with a more sober sense of the times in which we work for a greater measure of justice and a clearer sense of why that work is worthwhile.

This is my hope. Today there is much to fear and much still to understand. However evil was defeated in the past, it can be defeated again today. But the challenge begins by recognising and confronting that evil.

The publication is available to buy for your kindle through our store here.

The Special People - A Fable This fable is taken from Simon Duffy's book The Unmaking of Man and explores what happens when some people are treated as…
Slide: 21.09.13

Lessons From Our History Building on the book The Unmaking of Man, this talk was the opening keynote presentation for the 2013 New Zealand…