Much More to Life than Services

Bob Rhodes’ book Much More to Life than Services is a white water river ride of wisdom, insight and invective. Although its themes and ideas are intermingled and complex the book is full of truth - the kind of truth you only find by really doing things yourself. 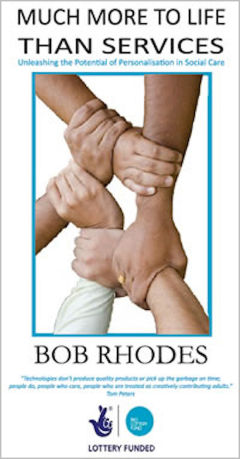 Bob is critical of the current welfare state system. He laments the way in which social and community efforts to support one another have been replaced by bureaucratic and professional systems which encourage dependency and a loss of belief in individuals, families and the wider community. He tells stories of communities in action, of how even now communities can come back into vivid life; but he also tells of the obstacles, nonsense, short-sightedness and the rank self-protection which flows from the systems of power and control we have allowed to be developed ‘above’ us.

The book is also a kind of autobiography and it tells of his own efforts to restore citizenship to those around him, particularly those people with learning difficulties whom he supported while founding and leading the service provider TACT. It is clear that he learnt much from this experience and like many of us who have tried to develop personalised support he recognizes that it is the breakdown of trust in others which fatally undermines our ambition to help people get good lives.

It was when he was able to shift power and control towards individuals, families and his own front-line staff that he was successful; but failure began when organisational growth and bureaucracy, combined with the fateful interference of regulators, commissioners and government, took the organization’s attention away from really focusing on providing the best possible support. You can feel his sadness and anger that much of what he achieved, or was hoping to achieve, now seems undone. Social entrepreneurs are often fated to wonder whether all their labour was worthwhile - but Bob tries honestly to sift the real achievements from amongst the disappointments.

I particularly enjoyed the stories of real people’s lives, and how, by looking at people’s difficulties with a more positive, problem-solving approach, Bob or his allies were able to help people turn a corner and get their lives back on track. It is this kind of intervention, which is often so small as to be invisible, that is often the key to good support. It is exactly this kind of intervention which is impossible to regulate and commission for - it’s not even really possible to purchase it in the market - it depends on the insight, wisdom and attitude of those around us. Bob rightly fears that this perspective on positive change will continue to go unrecognized.

Another important thread running through the book is the idea of personalisation. Bob has to walk a fine line here because he clearly approves of much of the underlying thinking about personalisation, in particular the need to get power and resources to people. However he has also begun to see that personalisation is in danger of slipping into a central government-led initiative which has all the problems that we associate with such initiatives: a focus on targets, not on outcomes; increasing bureaucracy, not flexibility; policy incoherence, not radical reform. He accurately recognizes that even the most well-respected advocates of personalisation remain wedded to ideological models which actually lead to its collapse. If you think personalisation is just about markets and money then you will fail to recognize the much more fundamental change in the relationship between citizen, family and community which is necessary. When governments pretend that they can run markets then we have a recipe for mutual disappointment.

Today Bob runs a new social enterprise called LivesthroughFriends and the final sections of the book provide insights into how we can work with those we care about to build better lives. Bob stresses the value of really finding out what people see as a good life for themselves - how it is only be working around that inner perspective that we can hope to really unlock better support solutions. He argues for a more expansive view of resources. We should not just be thinking about ‘spending our individual budgets’; instead we should be thinking about how financial resources can be linked to relationships, communities and our gifts and capacities.

Bob also reflects upon the vicious Catch 22 that we seem to be caught up in: we bemoan the damage that the state has done to the community, but we look to the state to solve the problem. Of course, as I think Bob feels, we can step aside from this Catch 22 and simply get on with the job of building a more just society. The fact that the state now controls 50% of GDP means we’ve still got 50% to work with - making citizens today far wealthier than most people in the world - even after taxing and means-testing. And we still have all of our love, passion, skill together with much of our energy and time. It begins to feel like we will only be able to reclaim control over our lives and communities if we begin with ourselves.

It seems to me that this is exactly what Bob is doing and demonstrating, and he should be commended for it.

The publisher is Fastprint Publishing.

Much More to Life than Services © Bob Rhodes 2010.

Review of Much More to Life than Services © Simon Duffy 2011.

Waste in Public Services The current welfare system wastes resources by reducing the ability of the citizen to put them to good use.
Article: 29.11.13

No to Competing Services - Yes to Human Rights Sami Helle explains to the European Parliament that people with intellectual disabilities should not be trapped in…
Slide: 25.03.12

Innovation in public services A talk for Sheffield Hallam University on the way in which social innovations struggle to succeed and how innovations…
Graphic: 03.06.12

Innovation in Public Services Innovation in public services goes through a series of phases and meets inevitable resistance.
Slide: 08.04.13

Fund Life Not Services Presentation given at The Centre for Welfare Reform's conference on mental health reform in Leeds, December 2012.