I was honoured to read a draft of this book and I am so pleased to see it out in print. Mary O’Hara has done an essential job: she has documented the injustice and the craziness of the UK Government’s deceitful ‘Austerity’ programme. To anyone who wants to understand the breadth and depth of the cuts and the non-reforms which the UK Government is imposing on us, then this is the best possible primer. 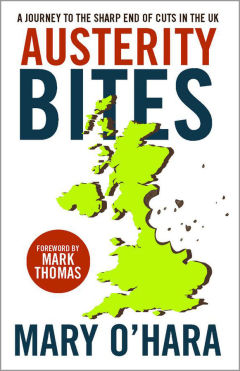 The book does three essential things. First it tells human stories - stripping away the vicious rhetoric of skiving, scrounging and defrauding, in which British politics and the media is now mired. What is revealed are human voices, people struggling to survive, mostly refusing to give in, but often driven to tears, despair or worse.

Second it provides useful facts, figures and good summaries of the inane and poorly thought-through policies that are now being imposed (although not without their own multiple failures and delays). This is a vital task, because one of the reasons that the Government has been so successful in creating such radical change is that so many policies are changing at once. Each policy is protected by its own initially plausible rationale and supported by teams of civil servants and political advisors. Few can keep up with the growing madness of it all.

For instance, it takes real effort to get to the reality behind the 'Work' Programme, which wastes money, doesn’t help people find work yet which the Government claims is funded using ‘Payments by Results'. So many commentators are taken in by this nonsense and don’t seem to spend the necessary time examining what is really going on. Mary O’Hara helps us get inside a whole range of these crazy schemes. The fact that the book is beautifully referenced (thankfully with footnotes - not in-text citations) is particularly welcome.

Third the book gives structure to the madness. There are so many different kinds of injustice that it's hard to know where to begin. But the chapter structure offers a well judged and coherent framework for describing the mess:

So, if this is our primer, what then is next?

Personally I agree with Kate Belgrave, a journalist working with the False Economy project who says:

There will still be a political vacuum until Ed Miliband wakes up from his coma.

For, the big unanswered question is: Why is it that the biggest attack on the welfare state since its creation, an attack entirely without justification, an attack far more extreme than the wildest fantasies of Mrs Thatcher, is succeeding? Political resistance, in all its forms, is essential.

I have to admit that I certainly did not expect such savagery or stupidity from a UK Government, and while I have spent a great deal of time trying explore why this has happened and what can be done - I remain rather bemused. I often feel that I am losing sight of my own country. Britain seems to be sinking and another, more dreadful place, is arising to take its place.

Now, it may be that I should be more sanguine. Perhaps this is just party politics as usual. I know some believe that if Labour were returned to power then everything will return to normal. Quite rightly they point out that the Labour Party was in power when the banks collapsed and so it is will be blamed; and so Labour must keep its head down, ‘look responsible’ and hope that it might be trusted again in the future.

But I fear we may need to think very differently if we are ever to get back on a better path.

You can order a copy of Austerity Bites through our store here.

Assessing the Assessors Independent research by disabled people on the assessment process which many are forced to undergo - the Work…
Paper: 12.06.14 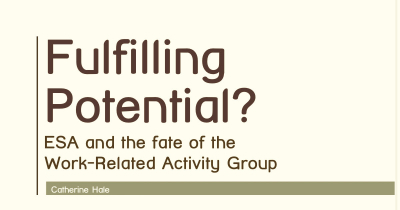 Fulfilling Potential? In this significant report Catherine Hale explores the experience of a key group of disabled people who have been…
Paper: 08.04.14

Beyond the Barriers A Spartacus Network report into Employment Support Allowance, the Work Programme and recommendations for a new…
Paper: 03.12.13

How Norms Become Targets Kaliya Franklin analyses the way in which the use of norms in the management of disability assessment (WCA) undermines…
Film: 27.10.13