Seven Ways to Think Like a 21st Century Economist

'Economics is broken' proclaims Kate Raworth, referring to what is still taught to students in most Universities and, more importantly, the ways of thinking which provide the dominant perspective on public policy, nationally and globally. Written with great intelligence, lucidity and wit, Doughnut Economics is the best available guide to the radical alternative economics we require to navigate the critical and pressing challenges which confront us all in the 21st Century. The core of this reframing is captured in the simple image of the book's title, the (American) doughnut: i.e. a circular bun with a whole in the middle. The boundaries of the inner ring represent the social foundation of well-being that no-one should fall below. The boundaries of the outer ring represent the ecological ceiling of the planetary pressures that we should not go beyond. The task of the new economics is to provide a roadmap for staying within the doughnut defined by these boundaries so as to achieve prosperity for all within the means of our planet.

At a time when big business and most governments are driving us fast down the road to high, and irreversible, environmental degradation and growing inequality, meaning desperate lives for so many global citizens, this is a simple image with profound practical implications.

Let's start however with Raworth's critique of conventional economics. In recent years, undergraduate students have taken to demonstrating against their economics professors and courses. Especially since the 2008 financial crisis, students have recognised that what they are being taught has little relevance to the real world, exactly the opposite of what they expected when choosing economics. They are right!

Raworth traces this disillusion to the 19th Century emergence of economics as a 'scientific' discipline. The originators were much impressed by the success of physics - with its illuminating graphs, mathematical equations and seemingly precise results - and aspired to create economics on a similar model. Economics is, of course, a social science but in order to make the mathematics doable, they introduced a number of simplifying assumptions: for example, people were assumed to be rational economic actors who always seek to maximise their personal benefit; the national economy was pictured as a closed system with various circular flows but energy and society were left out of this picture and environmental damage was regarded as no more than an 'externality'. Economies are diverse but increasingly the equations focused only on the market and at the macroeconomic level, a single goal - maximising GDP - became pre-eminent.

Now physicists too make simplifying assumptions - 'imagine a friction-less table' - but when people e.g. snooker players (or indeed engineers) apply the science, they reintroduce friction into their calculations. They don't expect that the balls, once propelled, will roll around the table forever! Unfortunately applied economists, especially those advising policy-makers, have not been so good at engaging with reality: indeed they have increasingly assumed that the simplifying assumptions are the reality and worse, started to make normative claims to the effect that everything should work like their models predict. (Famously, when Milton Friedman and his monetarist associates ran amok in the Thatcher/Reagan period, they were fond of claiming that the failure, for example, of the structural adjustment programmes inflicted on many developing economies was not because the theory was wrong but rather because these policies were not implemented vigorously enough.)

Of course, economics is not like physics, certainly not the Newtonian kind. It might have done better in the 20th Century (for example in predicting and perhaps averting the 2008 global collapse) if it had followed modern physics which embraces uncertainty and complexity and explores the dynamics of open systems. Even better, it could still model itself on the life sciences, notably ecology, which seek to learn from nature: a global open system which has a few million years of managing its economy successfully, at least until humanity gained the technical capacity to screw things up!

Why does this failed discipline continue to exert such influence over current thinking? It was Marx, a political economist, who postulated that 'the ruling ideas are always the ideas of the ruling class'. The corporate elites and their corrupt political agents - as we currently see only too clearly in the USA - propagate ideas which serve their own interests, not ours.

What is the radical alternative? The book's sub-title identifies seven keys to shaping a better future. Fundamental is the need to abandon GDP growth as a lodestar and instead use the doughnut as our compass, recognising that a thriving humanity depends on a thriving planet. In high-consuming countries like the U.K. this means getting off the growth escalator and learning to live without forever accumulating stuff. We shall be the better for it.

Changing the goals requires us to change the means. This starts from an alternative view of human nature: we are not always self-interested and motivated by money, in fact we are often cooperative and even altruistic. Economics needs to embrace our social adaptability. Equally, the new economics needs to address the big picture, an economy embedded in the interaction between environment and society and going well beyond the market to recognise that households, the commons we share and the state also need to play their part in meeting our needs.

In turn, this new perspective requires that we replace an over-simplified view of the economy as a stable mechanical system with the more dynamic model of a complex adaptive system in a living world, capable of self-organisation. To meet the doughnut goals, tomorrow's economy needs to be both distributive and regenerative by design. It must be designed to tackle current massive inequalities in wealth as well as income and prepare for a future when robots are doing most of our routine jobs, white collar and blue collar. Using living systems as a mentor, it must also be designed to use renewable energy, recycle materials rather than waste them and regenerate the gifts of nature.

This new thinking clearly has massive implications for both public policy and how we live our lives. Raworth's analysis provides many elements in a manifesto for the transformation to a better future. This starts from a new philosophy, what progressive leaders in Latin America call buen vivir, aiming to live well as part of the natural world which we nurture rather than abuse. More technically it requires a new metrics which measures what we value, whether or not this has a market 'price'.

Those of us living today have to be the turnaround generation, the people who shift humanity and our planet onto a new course. Doughnut Economics provides us with tools to do the job. Thank you Kate!

The publisher is Random House.

One Good Thing Malcolm Henry imagines a conversation between a leader of the Labour Party and Andrew Neil on the topic of Universal…
Article: 31.01.17

A Social Movement for Basic Income Bill Jordan describes how the idea of basic income inspired a pre-War social movement and wonders whether the same…
Review: 07.01.14

Austerity Bites Mary O'Hara's book describes the many dimensions of 'austerity' and how it is affecting the lives of ordinary people in…
Article: 02.02.19 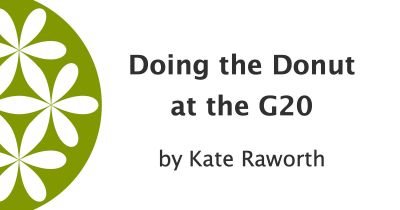