Politics often works by sleight of hand. We often focus on a government policy that is out in the open, for example the plan to cut Housing Benefit for the poorest. But we don’t notice some of the bigger redistributions that government doesn’t want us to see, for example the enormous subsidy to mortgage-holders that has been achieved by lowering the Bank of England’s interest rate to 0.5%.

Here is the rate of interest over the past 50 years: 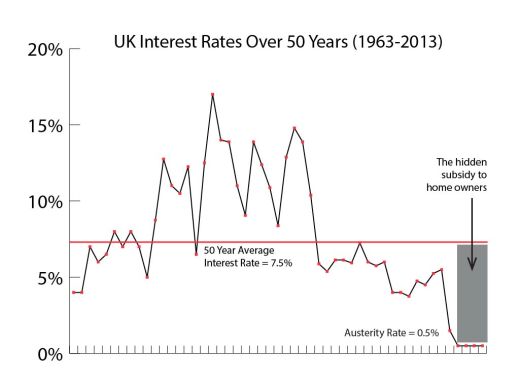 Keeping the interest rate so low effectively subsidises that portion of the population who have mortgages. And the subsidy is greater the bigger your mortgage.

Calculating the exact size of this subsidy is difficult, but a reasonable estimate can be made using data available from the Office of National Statistics. For instance if we use the data on Household Expenditure we can currently estimate how much mortgage interest is being paid at the current subsidised rate of about 2.5%. [I have used the data for 2011 which, interestingly, rather obscures the exact payments for mortgages; however reasonable estimates can be made by extracting Council Tax payments etc.]

However the Bank of England interest rates has typically run at 7.5% over the past 40 years, which would mean mortgage rates would be at about 10%. We can then estimate the effective subsidy to mortgage-holders by comparing what they are paying to what a normal rate would cost:

For the wealthiest 10% this is the equivalent to an extra £4,000 of income per year. 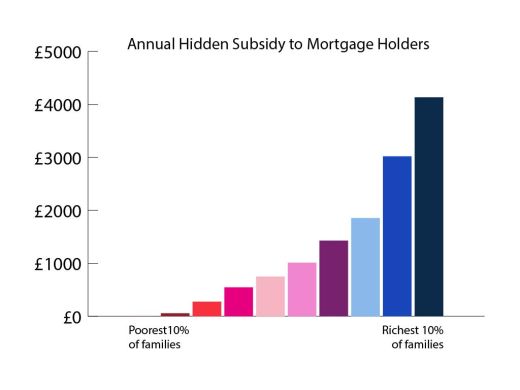 On this basis it turns out that while we may be focusing on, for example the £22 billion cut to benefits that target the poorest, mortgage holders are benefiting from a £33 billion annual subsidy. Over 5 years this will be £170 billion; over ten years this is equivalent to £341.48 bn. 55% of this subsidy is directed to the richest 20%, next to nothing benefits the poorest.

Ten Attacks on Disabled People's Rights Simon Duffy provides an overview of the main strategies being used to undermine the human rights of disabled people in…
Article: 22.09.13

Impact of PIP on Social Care This analysis was carried out on behalf of We Are Spartacus and estimates how the end of DLA will hit local government.
Paper: 16.01.13

A Fair Society? Produced for the Campaign for a Fair Society, this report shows how government cuts in the UK target disabled people.