Mo Stewart is a former healthcare professional originally trained in the NHS, and she’s also a disabled veteran of the Women’s Royal Air Force medical branch. Since 2009 Mo has worked as an independent disability studies researcher, exposing the influence of corporate America since 1992 with the future reforms of the British social security system, on route to the eventual demolition of the UK welfare state.

Mo provides powerful evidence of the long-standing assault on disability rights that has been supported by insurance companies, academics who provide policy based research and right-leaning politicians. Her research has been cited during debates in the House of Lords, the House of Commons and in Westminster Hall. She continues to share all research evidence with academics, medical and healthcare professionals, frontline national charities, selected politicians and service-users.

Mo’s earlier work was published by the Centre for Disability Studies at Leeds University, and has been routinely reproduced online by ResearchGate since 2014. Most recently, Mo has been invited to speak at academic seminars and to contribute a chapter to various books celebrating the value of disabled people engaging with activism. Mo’s book Cash Not Care: the planned demolition of the UK welfare state was published in September 2016, following seven years of study, and has attracted widespread critical acclaim.

More of Mo’s research is available via her website:

State Crime by Proxy In this paper Mo Stewart continues her research into the links between the DWP, Atos Healthcare & Unum Insurance.
Article: 28.05.13

From the British Welfare State to Just Another American State Mo Stewart argues that the current reforms of the welfare state were inspired by bogus research and the vested…
Paper: 03.01.18 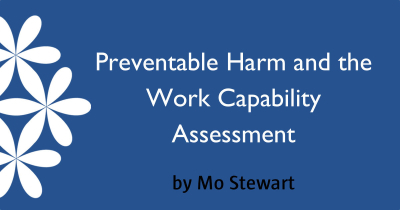 Preventable Harm and the Work Capability Assessment Mo Stewart provides a brief overview of some of the most important elements in the development of a policy which is…
Paper: 09.04.18

Letters to the DWP Correspondence between Mo Stewart, the independent disability researcher, and officials at the DWP, reveals the…
Paper: 25.10.18 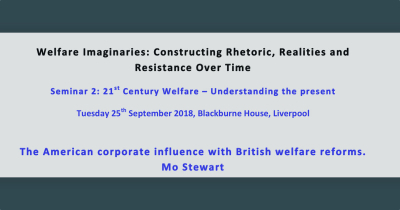 US Corporate Influence on UK Welfare Reforms Mo Stewart has been researching the damage caused by welfare reform and the malign influence of US private insurance…
Paper: 27.11.19 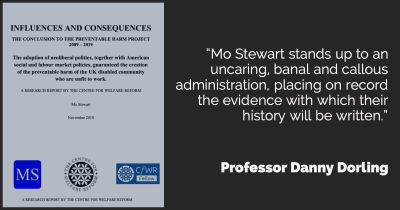 Influences and Consequences In the conclusion to the Preventable Harm Project Mo Stewart shows how US companies and right-wing ideology have…
Paper: 21.10.20 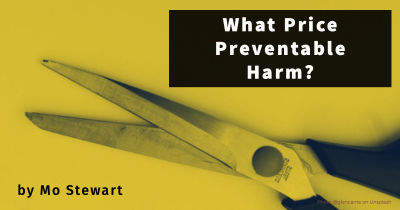 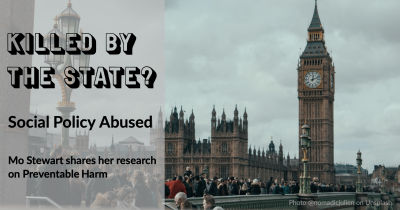 Killed By The State? Social Policy Abused Mo Stewart describes the outcome of 10 years of independent disability studies research into the social policies and…
Paper: 16.03.21

The Creation of Preventable Harm The Work Capability Assessment (WCA) is a key element of the UK Government's welfare policy and has caused preventable…
Paper: 02.11.21 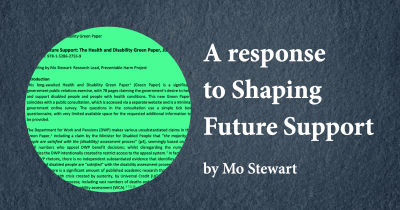