The Failure of Competitive Tendering in Social Care

This paper was written for the sake of my friends at Lyhty, Citizen Network Finland and KVPS who are currently threatened by a regime of ‘competitive tendering’ for social care services. They have created a fantastically successful public campaign - Not For Sale! - gathering a petition of over 50,000 people to force a discussion of the issue in the Finnish parliament. (If this had been a UK campaign it would be equivalent to getting more than half a million signatures.)

Competitive tendering began in the 1980s, but it became central to all social care (support for people with disabilities, including the elderly) after the 1992 NHS & Community Care Act. From this point onward local government was forced to become a ‘purchaser’ of services, while the private and non-profit sectors became ‘providers’.

These changes happened at the beginning of my career and much of my early thinking and practice was focused on trying to make sense of these changes. More experienced colleagues were more pessimistic than me, they believed that these changes would be wholly negative. However I felt that these changes, whilst dangerous, did present some opportunities for positive change.

In 1996 I wrote my first book Unlocking the Imagination where I argued that the model of commissioning proposed by government was wrong; however I tried to persuade local leaders to adapt that model to design a better system to promote inclusion and empowerment for local people. But it turned out that I was naïve and that my colleagues were right. The UK’s system of competitive tendering has been very harmful and there have been no serious efforts to reshape it into one that promotes better values. The dominant neoliberal ideology, which has reduced everything to financial transactions and contractual control, has won the day.

The only successful challenge to competitive tendering has come from those people who have managed to exit the system, by demanding control over their own funding. First the 1996 Direct Payment Act allowed people to ask for their own budget, instead of a service. In 2003 I led a project called In Control to individualise all social care services using personal budgets. These initiatives have had some success, but they have come into conflict with the established system:

Today, in England, less than 25% of the funding has been individualised, most funding remains locked inside the competitive tendering regime.

The impact of competitive tendering

The impact of competitive tendering has been wholly negative and it has caused a number of serious problems, each of which has got progressively worse over time: 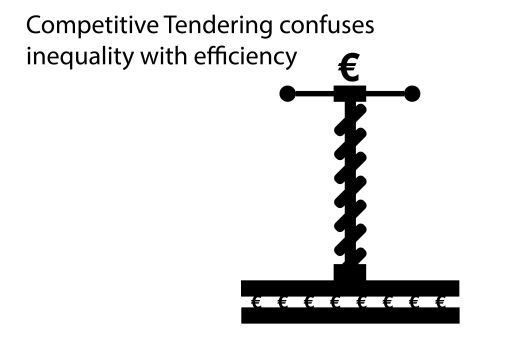 1. Lowering costs by cutting frontline salaries - When competing for funding the easiest way to win a contract is to reduce the salaries of frontline staff. However, and at the same time, salaries for senior managers have rapidly increased, so the level of income inequality inside organisations is now extreme. For example, the CEO of an NGO (Non-Governmental Organisation, often called a 'charity' in UK law) may be earning €210,000 pa whilst frontline staff may be on €16,000 (a ratio of 13:1). Social care has also seen rapid growth in precarious work: zero-hour or short-term contracts. Things have got so bad that many NGOs can no longer afford to meet minimum legal standards for pay and have been lobbying government to be exempted from these standards. It seems shameful that some NGOs are campaigning to keep standards lower rather than fighting for better rights for disabled people. 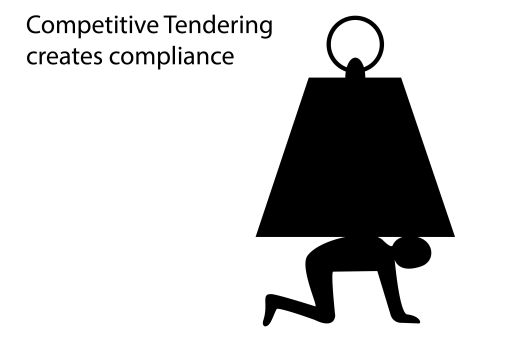 2. Increased compliance and reduced advocacy - In the past NGOs acted as advocates for people and for important causes; however today their independence has been eroded. They are very reliant on government funding and they can lose funding very quickly. Today NGOs provide little meaningful advocacy and this has contributed to the deep cuts in social care - 700,000 people have lost support since 2009 - a cut of over 40%. This was one of the major reasons why the United Nations recently condemned the UK Government for using its austerity programme to target cuts on disabled people in breach of the UN Convention. 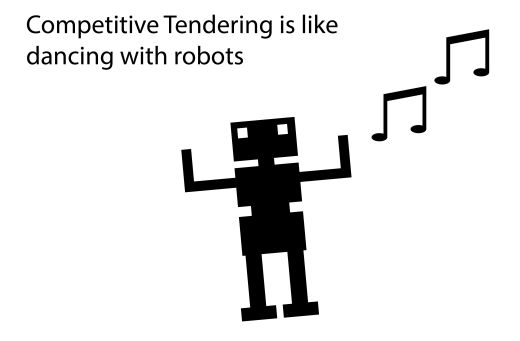 3. Toxic culture of mistrust and regulation - The financial, bureaucratic and transactional focus of tendering damages the quality of relationships within and between organisations. Anything too warm and human now seems suspicious and contrary to the principles of tendering; only bureaucratic processes can be trusted. This has created a culture of mistrust which has infected almost every aspect of social care. It is assumed that government only wants to save money, service providers only want to make profit and that staff are all potential abusers. Every problem is solved by adding more rules, regulations and penalties. John O’Brien has called this new world Cog World, and its spirit is entirely hostile to the purpose and nature of social care and independent living - it is like expecting a robot to dance. 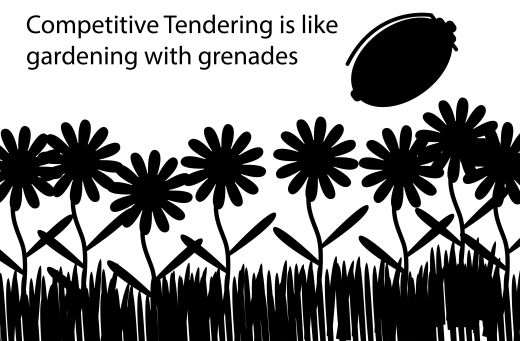 4. The death of creativity - Before the era of competitive tendering most innovative work was carried out in the NGO sector and it was common for NGOs to cooperate with each other and with government. Today’s NGOs now compete with each other for work and fear cooperation. The tendering process has also killed creativity. Government officers who issue contracts for funding will never be a source of creativity; it is only people, families and practitioners who can develop creative solutions to problems. This is the true source of efficiency and positive social change. Competitive tendering creates organisational chaos, yet it is fundamentally conservative. Commissioners are constantly purchasing last year's solutions. Contracts that are ripped up every three years will never foster real creativity, which demands time, commitment and the capacity to take risks. Competitive tendering is like gardening with hand grenades.

The myth of the social care market

Although there is no evidence to support the use of competitive tendering the idea that this is a reasonable process is sustained by a series of myths and linguistic tricks. We apply important sounding language from another world and then imagine a reality that does not exist. In the process we become blind to the critical damage that is being done. For instance, Government often refers to a social care ‘market’ but this is an illusion. In the current system:

Even if you like markets it is clear that the social care system is not really any kind of market. The current system is more like the Christmas myth:

Unfortunately Santa Claus does not exist and it is not a good idea to ask someone you don’t know to make important decisions about your life on your behalf. It is also not a good idea to enslave a race of elves to carry out your wishes. People with disabilities need rights, not gifts; and professionals need to work in partnership with people with disabilities and their families, not for the Government.

The new language of social care also makes us forget that creativity is essential to human services - at every level. Notice the language we have been forced to use:

This is the language of industry. Strangely, at the same time as traditional industry has declined, its language has been imported into the world of social care. We had hoped that, as the institutions began to close, people with disabilities could take their place as full citizens. Instead we’ve converted human relationships into manufactured commodities that can be sold and purchased in bulk.

The way out of the madness

After 25 years this system of competitive tendering is now approaching collapse:

But the biggest cost of this system is the opportunity cost: for 30 years we have missed the opportunity to do the right thing, to focus on creating inclusive and welcoming communities and on developing ourselves as active citizens. Instead of seeing people with disabilities as leaders in the transformation of our communities we have wasted our time by wrapping some people in over-regulated and under-funded services while leaving others isolated and unsupported.

The alternative is clear enough:

Finland is showing us the way. It is time to throw competitive tendering in the bin. It is time to reclaim our citizenship and design a social care system that treats us as full human beings, not as lots to be sold off to corporations at the lowest possible cost.

If you are interested in getting involved in a UK Campaign Against Competitive Tendering then join the Facebook Group where planning is underway.

The Failure of Competitive Tendering in Social Care © Simon Duffy 2017. 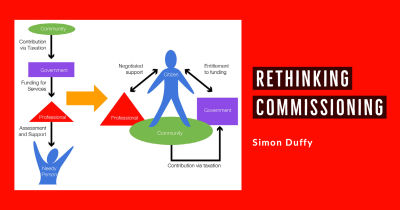 Unlocking the Imagination Simon Duffy's book first published in 1996 now updated, offers a path for commissioners who want to create the…
Inspiration: 18.02.13

Lyhty - Finnish Punk Rock and Much More A Finnish community hub which is helping people with intellectual disabilities create music, media and so much more.
Paper: 15.05.14

Self-Directed Support in Finland This research report from Finland shows the success of personal budgets in improving the lives of people with…
Article: 25.02.16

Personal Budgets Just Mean Freedom In the third of a series of essays from Finland Simon Duffy explains that a personal budget is fundamentally a way of…
Article: 02.02.16

Politics & Economics of Personal Budgets In the first of a short series of essays Simon Duffy explores the political and economic challenges of moving towards…
Paper: 30.07.13

Commissioning and Community Sourcing Written by Chris Howells and Chris Yapp this publication shows commissioners how they can break free from damaging…
Paper: 21.01.13