Terry Lynch describes how damaging it can be when professionals see only the label, not the person. For an older person this can be a matter of life and death. Terry describes the strategies you need to use to help shift professional perspectives.

I got a cup of coffee in the hospital cafeteria and walked to the second floor. My mother had been admitted the evening before and I wanted to be sure I didn’t miss seeing her physician during his rounds. The head nurse intercepted me. She wanted me to know my mother’s disorientation was not related, solely, to pain from fractured vertebrae. She was also in congestive heart failure. Without a pause, the nurse informed me that my mother did not want to be resuscitated if her heart should stop beating. The nurse had obtained this verbal directive from my mother just before I arrived.

I could not believe what I had just heard. If my mother was experiencing congestive heart failure, it was probably due to recent medications reductions, not because she was terminally ill from “natural causes.” Although she was 84 and badly beaten up by osteoporosis, she still loved life. She would not turn away from it so readily. I told the nurse she must be talking about someone else. She walked into room 223 with me to demonstrate she was not mistaken. There lay my mother – in body only. The nurse had obtained a “DNR” consent from a patient who was orbiting Saturn on a demerol injection (strong pain killer).

I had to work fast. After convincing the nurse that that I held health care power of attorney for my mother and that the DNR order should be reversed, I asked what was being done to get her through this crisis. The nurse looked at me quizzically and said the doctor would decide on a treatment plan when he arrived – later that morning or in early afternoon. When she realized I was serious about taking my mother back to the emergency room unless she received instant attention, the nurse called the physician. He ordered tests that determined there was no immediate crisis.

Meanwhile, my mother’s breakfast had arrived. Too groggy to chew or swallow normally, she had aspirated her eggs earlier that morning. While she was no longer a “DNR”, she had graduated to a “soft food only” status. No more yummy hospital fare. She had to eat it pureed. I insisted that the demerol injections must stop. My mother must be given pain medications that would allow her to chew, swallow, move…. and think. I left to get another cup of coffee and returned to find that my mother had been given another injection. Leila Lynch was back in full orbit.

I slumped, overwhelmed, into a chair near the nurses’ station. I had brought my mother to what I had thought was a safe haven but it seemed much more like enemy headquarters. How were we going to get out of this one? This was a place where getting her to her 85th birthday was not, apparently, a high priority; where “informed consent” was something different from what we find in texts on medical ethics; where she was so drugged she had agreed that her life was not worth fighting for; and where, at a time when activity and nutrition were essential, she was left to stare through glazed eyes at pureed salisbury steak and carrots, hospital life swirling around her, nurses poking their heads into her room to admonish her that she “must eat more to get better.”

Some keys to person-centered advocacy

I felt small and powerless against the forces that had enveloped my mother. It was probable that if things remained as they were she would not survive, but how could I possibly get control of this overwhelming situation? Some steps were clear. My mother had to be switched to pain control medication that would enable her to join in the battle for her life. Treatment for congestive heart failure had to begin immediately.

These actions, however, would probably not be enough. My mother needed an intensive campaign to help her get past this life-threatening situation and back on her feet. She needed to be surrounded by allies whose mindset was “we have to get her well”, not “she should not be resuscitated.”

In retrospect, these are the principles I followed to extricate my mother from this life-threatening situation. I have found them useful in less harrowing everyday circumstances, as well, and essential to my work.

Base all actions on strategic considerations

Experience as my mother’s advocate and advocate for other people with disabilities had convinced me of the primacy of strategic thinking. All my decisions affecting my mother’s well-being had to be made in consideration of what was best for her and not driven by fear, anger or frustration. I was certain that “going to war” against the hospital staff would not be the most effective strategic approach to this situation, especially as there were bound to be natural allies among her nurses. My mother’s chances would be much better if as many staff as possible were invested in her survival out of positive feelings for her, not because she had a wild-eyed family advocate at her bedside.

Replace the labels with the person

Experience had also taught me that well-meaning service providers, under work pressure, can forget “this is a person we are dealing with here.” Sometimes the individual – and ethical obligations to that individual – are lost under a blanket of negative labels and misperceptions. My mother had become “the CHF in 223” (the patient with congestive heart failure in room 223). Because of her back injury, she had not been to her hairdresser in the days before her hospitalization.

As my mother lay in her bed, without makeup and hairdo, quite ill – and 84 – I could see how she might be mistaken for a person who had “had it” and was ready to die. “Old, sick, confused, crippled. Who would want to go on like this?”

From my conversations with nursing staff after that nightmarish first morning, I learned that several would not want resuscitation should they be old, sick and in the hospital. They had seen too many patients revived, only to linger in a vegetative state, burning up scarce resources. These graphic experiences had likely blurred the judgment of the head nurse when it came to my mother’s rights to informed consent and appropriate treatment.

To help staff get past these obstacles, I started with the basics. I let them know that my mother still valued her life, and was valued, and that I expected her to be given every chance to make it out of there alive and mobile. I asked the second shift staff to make sure everyone understood that I expected my mother to be treated as a person, not as a second class citizen whose rights had been abrogated.

I then had to get my mother as actively involved as possible in the campaign. She had to get to work on stripping away the labels and false assumptions that blinded some staff to who and what she was. Her physician agreed to reduce her pain medication dosage. Within a few hours, my mother’s beautiful smile was back.

Soon my mother was asking questions about the nurses’ lives and sharing information about hers. “Oh, so you don’t live in a nursing home, Mrs. Lynch?” They laughed at her jokes and she at theirs. A friend washed and set her hair. She put on her makeup and sat up in a pretty robe. I brought in a scrapbook of pictures covering my mother’s tomboy childhood, her active life as a homemaker and teacher, and her fulfilling retirement years.

Quality services are only part of what vulnerable people need to get well and return to everyday life. They also need what all of us need: supportive community – family and friends who are invested in their wellbeing. I made sure that my mother’s friends and neighbors visited my mother each day. Her room filled with cards and flowers. I paid her self-employed personal care workers to be with her at mealtimes, when I could not be there, and to help her with physical therapy. With their actions and words, her visitors let hospital staff know that “this is a person of value. Something important is going on here!”

I went out of my way to personalize her nurses, physicians, therapists and social work staff. I told them how appreciative I was of their services to my mother and how important they were in her life.

Nurses began to make extra visits to my mother’s room “to be sure she finished her pudding” or to help her walk around her room one more time. Then, one morning, the nurse (Marge) who had determined that the “CHF in 223 is a DNR” walked into my mother’s room to say hello. As she left, she asked another nurse “who is doing Leila’s hair today?” Leila Lynch had surfaced, the labels had been torn away and the campaign was rolling.

15 days after she entered the hospital, my mother returned to her home and the life she loved. Sara, one of my mother’s nurses, helped me get her to the car. Sara had been one of the many nurses whose care had been so important to my mother’s survival. Because she was a quiet person, I wasn’t sure how she felt about me or about the campaign. As she walked away, I thanked her for all she had done to help my mother get well and leave the hospital. Sara whirled around to tell me what had been bottled up. “We didn’t get your mother out of here! You did. You fought for her.” Sara apologized for the lack of cooperation I had received in trying to reduce my mother’s pain medication. Then she said, “You knew Leila. We didn’t.”

When I think back to those 15 days, I often find myself hoping that the physicians, nurses and other staff who cared for my mother remember her whenever they treat other patients who bring negative labels along with their illnesses and injuries. I hope they remind each other that these are people in patients’ gowns and that they don’t know who these people are.

I hope they try to find out.

Terry Lynch is the owner of Strategies for Independent Aging in Racine, Wisconsin. He has been consulting and speaking on independent living, successful caregiving and self-reliant aging since 1985.Wisconsin Governor Jim Doyle appointed him to the Wisconsin Board on Aging and Long-Term Care in 2006 and to the Board of the state’s Quality Home Care Authority in 2009. 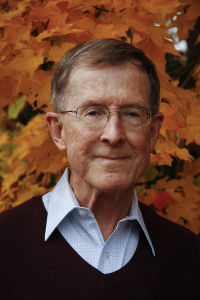 Avoid the Quantum Leap Terry Lynch explores how to avoid those desperate placements in residential care, unnecessary hospitalisation or…
Review: 15.10.10

But I Don't Want Eldercare! Terry Lynch's ground-breaking book explains how you can help your parents to stay as strong as they can, as long as they…
Paper: 05.11.09

Keep the Flame Burning A brilliant summary of the important insights of Terry Lynch into ageing.
Paper: 30.07.13

Mythology and Getting Old In this film for "We Chose To Climb" 2015 Terry Lynch explores some of the dangerous mythologies of old age.