Terry's unique strategies for supporting, personalizing and protecting the rights of older people are presented in his ground-breaking book, But I Don’t Want Eldercare! and his powerful essay, Keep the Flame Burning and other material published by the Centre. Terry is engaged in a project in his home state, Wisconsin, to expand the number of older people who are self-directing their support and to enhance their capacity for building rewarding lives as respected members of their communities.

Terry has been promoting the independent living cause since 1977, when he served as Assistant to the Director of the White House Conference on Individuals with Disabilities. He then managed a federal government disability rights program and had a key role in the establishment of the National Disability Rights Network.

Terry returned to Wisconsin in 1985 to begin his consulting and speaking business. He soon began living his work. For the next 10 years, Terry helped his mother remain at home, in control of a meaningful life, overcoming challenging medical problems and a life-changing memory disorder. His writing and his work in the self-determination movement are founded on this illuminating personal experience, as well as his work with other families.

Wisconsin Governor Jim Doyle appointed Terry to the state’s Board on Aging and Long-term Care in 2006 and to its Quality Home Care Authority Board in 2009. Terry is a Board member of a national advocacy organization dedicated to elevating the status and wages of direct care workers and is engaged in shaping policy advocacy for the Alzheimer’s Association of Southeastern Wisconsin. He is a founding member of In Control Wisconsin.

But I Don't Want Eldercare! Terry Lynch's ground-breaking book explains how you can help your parents to stay as strong as they can, as long as they…
Story: 16.11.10

'The CHF in 223?' - That's My Mother Terry Lynch describes how damaging it can be when professionals see only the label, not the person. For an older person…
Article: 03.11.10

Avoid the Quantum Leap Terry Lynch explores how to avoid those desperate placements in residential care, unnecessary hospitalisation or…
Paper: 05.11.09

Keep the Flame Burning A brilliant summary of the important insights of Terry Lynch into ageing.
Article: 19.12.11

Self-Determination Doesn't End as We Age Terry Lynch shares his and his mother's experiences of growing older and maintaining dignity and self-determination…
Film: 25.10.12

8 Rules - Keep the Flame Burning Terry Lynch's film tells us the key things to remember as we grow older about how to stay independent and in control.
Paper: 30.07.13

Mythology and Getting Old In this film for "We Chose To Climb" 2015 Terry Lynch explores some of the dangerous mythologies of old age.
Article: 13.08.18 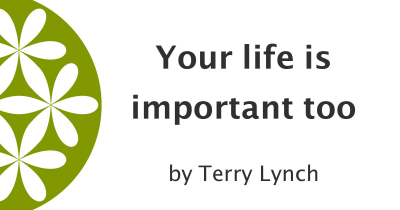 Your Life Is Important Too Terry Lynch shares his personal insight on why it's important for carers to take care of themselves.