Noel Pearson is a lawyer and activist, and director of the Cape York Institute for Policy and Leadership. He is passionate about improving the real education of his own aboriginal people in Australia. 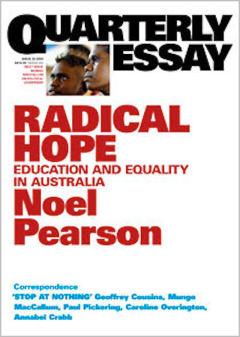 In Radical Hope he sets out a withering analysis of past educational reforms and the way in which they have undermined educational achievement for aboriginal people.

He also describes how the approaches to education which have demonstrated the best outcomes have often been undermined by public policies based on ideology. In particular he points to the value of Direct Instruction (DI) and the work of Siegfried Engelmann. According to Pearson the major US research on education methods, which demonstrated the value of DI on every measure was subject to  "one of the biggest frauds ever in the history of so-called evidence based policy."

Pearson also goes on to demonstrate that the problems in education reflect deep problems that sit at the heart of the welfare state's treatment of those who are disadvantaged. He writes:

Self-interest is the most powerful engine for individual and social development, in other words, social progress, in other words social justice. It is when the most disadvantaged in society have the opportunity to improve their lives in their own self-interest that change will take place. A whole lot of individual change animated by self-interest amounts to social change. Social change amounts to social justice. The provisioning of opportunity is indeed one of the key expressions of our common good; a product of social, altruistic and democratic action on the part of citizens and their government - but turning opportunity into capabilities and a better life is a product of enlightened self-interest. No anti-poverty or "social inclusion" aspiration willl get anywhere without understanding that self-interest is the driving engine.

As Pearson notes this kind of paternalistic altruism is endemic to the welfare state and it is rooted not just in demeaning and degrading views of those who are disadvantaged. It is also self-serving for the classes who promulgate dependency and low expectations. In fact, although this book is rooted in the experiences of aboriginal people in Australia it is clear that many of its lessons apply equally as well to disadvantaged groups in all welfare states.

Pearson goes on to offer a powerful set of guiding principles for people who are in disadvantaged groups -  do the opposite:

Noel Pearson advocates a radical reversal of current welfare policies, giving genuine control and power back to local people over their own education and well-being. It is only then that he believes his people will be able to guarantee for themselves the kind of high quality education that they need. It is interesting to note that this cry tallies with the research in the UK that shows that it is the poor, above any other social group, who want increased levels of control over education and healthcare.

The publisher is Quarterly Essay.

Education For A Better Tomorrow In this important paper Heidy Araque and David Towell explore the relationship between the education system and the…
Graphic: 01.08.09

Portable Education Budget There seems to be no good reason why families should not control the funding for their child's education - especially if…
Article: 02.10.15

Equality and the Governance of Welfare Dr Henry Tam believes that the governance of welfare has to be conducted transparently and inclusively. Here he sets…
Film: 15.02.14

Equality and Diversity Simon Duffy talks about how the idea of citizenship can help us reconcile equality and human diversity.