Racisms: From the Crusades to the 20th Century

If we want to change something, a good start is to understand it. As the sub-title of this book makes clear, racism in its many and varied forms (so 'racisms') has been and remains a continuing part of our global history. Bethencourt's excellent study greatly aids this understanding.

I was born shortly after World War II ended, a global conflict which took 60 million lives and was driven in Europe by Hitler's racist state. In direct response to this greatest of human catastrophes, post-war leaders established the United Nations, created the Universal Declaration of Human Rights, in Europe started to build a new set of unifying institutions, now expressed particularly through the European Union, and elsewhere accelerated efforts towards ending colonial domination of other peoples.

Of course, progress was not uniform: key struggles like that against Apartheid in South Africa and for black civil rights in the USA are still unfinished and there have been many more disasters like ethnic cleansing in the Balkans and the genocide in Rwanda. Moreover, it certainly feels to me as though a new descent into nationalism and racism is looming. The UK has just voted, admittedly by a narrow margin, for leaving the EU in a campaign where 'immigration' seemed the most powerful issue (and we now have a new Foreign Secretary known for casual racism); France, no less, the honourable home of liberté, egalité, and fraternité, could next year have an ultra-nationalist President - meanwhile migrants drown in large numbers in the Mediterranean and 'terrorists' shoot people in the street; and Republicans in the USA have just chosen as their Presidential candidate a man who trades in raising irrational fears and scapegoating minorities.

What Bethencourt does is to painstakingly explore the origins and significance of racist ideas and practices over the last 1000 years which provide the antecedents to these current challenges. He defines racism broadly as 'any prejudice concerning ethnic descent coupled with discriminatory action' i.e. it combines some form of characterisation associated with some consequential practice. By looking back as far as the Crusades, described as a 'holy war', he usefully reminds us that religious conflict has often been associated with racism. In a short review however, the most instructive place to begin is with the book cover. 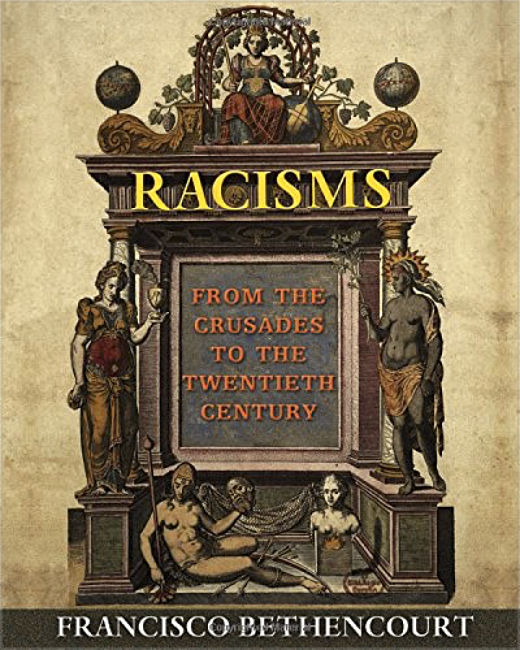 This picture is the title page to Abraham Ortelius's Theatrum Orbis Terrarum, first published in 1570, an early printed atlas of the world based on European oceanic explorations. We see that it personalises other continents and their peoples with stereotypes which have had lasting application. The continents are arranged hierarchically. Europe is on top, followed by Asia and Africa on the sides, and the Americas (i.e. their then native peoples) at the bottom. We see they differ in skin colour and other attributes. Europe is fully dressed and sitting elegantly, with an imperial crown and holding a cross. Asia is also elegantly dressed, although standing barefoot, and demonstrates some artistic appreciation in her adornments. Africa by contrast is represented as an almost-naked woman. She is dark brown. America is lying down totally naked, with bow and arrows, exhibiting the severed head of a victim of cannibalism. There is a lot more in this picture but clearly Europe's superiority is compelling - at least to European eyes.

Bethencourt details how much later, as emerging scientific disciplines challenged traditional biblical understandings of creation, various classificatory systems - perhaps starting from that of Linnaeus in 1735 - gave new credibility to ideas of race, even if their scientific basis (e.g. attempts to measure brain size) contained little science!

Racisms have been ubiquitous over this history. Bethencourt explains this sociologically: all the examples he gives - and there are many - can be understood as elements of a political project which seeks to advance and legitimate one group's advantage (e.g. in the dominance of ideas and the control of territory and other economic resources) over another. But of course the details differ according to the context. Let's look briefly at three examples.

Clearly European colonialism benefitted from our eurocentric view of European superiority and, more to the point, our prejudices about the inferiority of others, for example, in their lack of Christianity. Sending millions of Africans across the Atlantic to become slaves in our colonies required however a stronger prejudice in which they are seen as less than fully human: a prejudice strongly contested by the 19th Century abolitionists (even though as I write, a new campaign in the USA is needed to tell us that 'black lives matter').

The Latin American example is a little different. The Spanish took religion (they built their cathedrals on top of the native pyramids) and brought back gold. They also made discrimination and segregation a core feature of their urban planning. For hundreds of years they built Spanish-style cities in which the elegant centres housed people of Spanish origin, mixed-race people lived more peripherally and the indigenous people lived outside the cities, organised by ethnicity and exploited by the religious orders who were given authority to administer these territories.

Coming more up-to-date, the 19th and 20th Century expansion in nationalism added to ethnic prejudices, especially where nation and race became fused, most notably (but not only) in Nazi Germany. Those who have visited the Jewish museum in Berlin will know that prejudice and discrimination against Jews in this territory go back to the 14th Century but it took widespread German resentment about the settlement imposed after the first World War and a particularly virulent set of claims for Aryan racial purity, together with Nazi militarism, to produce the 'final solution'.

Bethencourt is a historian first: he doesn't seek to use this very detailed analysis to make prescriptions. We need to draw our own conclusions. Here are five.

Throughout this history (we can think, for example, of the slaves in Haiti who gained liberty from French colonialists through their 1791 revolution and the US civil rights movement in the 1960s) good people have sought to challenge racism as 'Hope not Hate' does now in the UK: we all need to be part of this resistance. One part of this involves identifying the myths which inform popular prejudices - perhaps by showing how they have been recycled ever since Ortelius's picture - and unmasking the real interests which these prejudices serve. We also need a strong alternative vision of 'buen vivir' i.e. of how we might better live in harmony with ourselves, each other and our natural environment. Organised resistance is required to challenge the perpetrators of racism (like the Murdoch press in the UK) and further outlaw discriminatory practices. And in everyday life, we can try to live the 'more in common' philosophy articulated by the late Labour MP Jo Cox and find ways of standing alongside those at risk of victimisation. In 2016, we have a lot to do.

The publisher is Princeton University Press.

Racisms: From the Crusades to the 20th Century © Francisco Bethencourt 2014.

Review: Racisms: From the Crusades to the 20th Century © David Towell 2016.

The Rise of the Meritocracy Michael Young's classic attack on the arrogance and thoughtlessness of our meritocracy and failure to understand the…
Review: 04.01.11

Radical Hope: Education and Equality in Australia Noel Pearson describes how educational reform has failed for aboriginal people and makes the case for welfare reform…
Review: 01.07.13