Australia has embarked on the most important international initiative to make disability rights real. If the National Disability Insurance Scheme (NDIS) is successful it will be a world-leading example of how a country can respect and value its citizens with disabilities. It would set the bar high for so many other countries around the world.

But how do you build a great system of support that enables disabled people to take their place as equal citizens? Unfortunately public policy-making in Australia, as in the rest of the developed world, struggles to address issues of citizenship, power and entitlements. We are still caught firmly in a paradigm where we believe the powerful know best, and the rest of us must just accept what we are given.

This may seem a peculiar view. For, since the 1970s, there has been an on-going decline in our confidence in the state’s ability to plan for us, and the ascendancy of liberal theory which is orientated to markets and to the private sector.

Yet in public policy this has translated, not into strategies to empower citizen, but into new ways of controlling citizens:

In fact one recent example from the United Kingdom sums up horribly the path we seem to have been drawn down. The progressive think-tank Demos were funded by Mastercard to research the ‘value’ of prepaid cards to control how disabled people or people on benefits spend their money. This is a policy which seems directly hostile to citizenship and equality, deeply patronising in its assumptions and, of course, self-serving for the organisation who funded the research.

So, we have a veneer of liberalism, which is used to articulate new policy options, but the real underlying assumptions are actually meritocratic - the powerful know best - and they should be rewarded accordingly for their efforts. The paternalistic post-war welfare state is being replaced with something much worse - a welfare state where the powerful exercise control through conditionality, commissioning and corporate influence.

This brings us back to the challenge of NDIS. Here we have a policy built upon excellent values and principles. It is completely right to believe that people with disabilities not only have the right to shape their own lives, but when they can do so, they will also support the development of better communities and a better society for everyone.

But the challenge will be to protect these intentions and values from wider cultural assumptions that are inimical to it.

Already, I fear, some of the systems imposed by the Federal Government on the NDIS are damaging:

Again, while the explicit values of NDIS speak of rights, choice and control the reality may fall far short of this. Very easily such systems tend to tip into an increasingly patronising and controlling bureaucracy.

One way out of this trap could be to focus explicitly on the concept of innovation. Even for those wedded to a liberal or a meritocratic way of thinking the value of innovation is unarguable. Things cannot improve unless things change - so understanding change and how to promote it is essential.

In my own mind one approach might be to distinguish three different zones within which innovation can take place:

Zone 1 - individual innovation: The fundamental form of innovation comes when individuals can bring about change in their lives - get a job, make a friend, change home, take a risk.

Zone 3 - community innovation: The capacity we have to achieve positive change is a function of the places we live and the people we know; citizenship is not achieved by consumerism but in community and different communities will learn to be welcoming and nurturing in different ways. 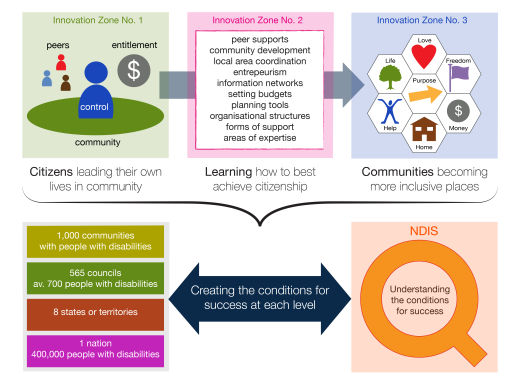 On this reading NDIS will only become pro-innovation - and thereby efficient, effective and sustainable - if it understands how to promote innovations in each of the three zones. It must empower citizens and avoid undue interference, it must encourage system change and avoid over-defining local processes and it must learn from, and with, communities across Australia.

Another critical idea that we can use to challenge the meritocratic impulse is empirical evidence. There is already plenty of evidence that shifting real power and control to citizens improves outcomes and efficiency, but we should start to see the gathering of empirical evidence as critical in public policy. And again, this means that plurality, the possibility to test different hypotheses and to compare one system to another is critical.

Homogeneity kills innovation and it kills evidence - it makes us blind.

Only a focus on citizen power and civil society will put us back on the road to social justice and to welfare systems that really work. NDIS is at the beginning of a critical journey, where it will need to both engage with the flawed policy assumptions of the past 40 years, while plotting its way to something better and more mindful of citizenship.

This article was first published by Power to Persuade

Designing NDIS Simon Duffy gives an international perspective on the design of systems of individualised funding for people with…
Story: 22.01.13

Michelle and NDIS Dell Stagg describes how she rescued her daughter from an institutional service and the need to respect families in the…
Article: 28.05.13

The Road to NDIS This paper by Robbi Williams and Simon Duffy explores the English experience as a valuable source of information for…
Paper: 10.09.13

A Personalised Approach to Safeguards in the NDIS Marita Walker, Kate Fulton and Bruce Bonyhady offer an approach to safeguarding and quality that starts from the…
Article: 26.10.12

Fears for NDIS A summary of concerns about the design of Australia's important National Disability Insurance Scheme (NDIS).
Article: 14.02.14

Reforming NDIS Simon Schwab outlines the principles that should underpin the reform of NDIS.
Slide: 08.04.13

Travelling Hopefully - lessons for NDIS This talk was given to some of those leading the design of Australia's NDIS and setting out international and English…
Paper: 24.02.13