Pathfinders is an essential book for our times, and I only hope I can review it with a modicum of justice. It is doubly difficult to review because the book should have two audiences - although it may only have one. The first audience is the one who will have already heard of its authors - John O’Brien and Beth Mount. They will know that these are two of the most important thinkers and practitioners who have ever championed the cause of people with learning difficulties or (using the language of the USA) people with developmental disabilities.

The second audience are those who have never heard of these authors and who have given little thought to the place of people with learning difficulties in the modern world. For many good people, including many who will visit the Centre’s website or read its book reviews, are people who come from a very different world - a world in which inclusion is still rare - a world where people with learning difficulties are still missing.

I do not know how to speak to both audiences at the same time, and so I ask for a little patience from those who know nothing of the world of inclusion. However, I think I can speak to the first audience quite briefly and encourage them to get hold of this book as a matter of urgency. You will know already that John and Beth (please, excuse my informality) are pioneers of person-centred planning, and thought leaders in supported employment and supported living. They have not only championed the ideal of inclusion, but they have helped us to move towards that ideal. They are radical thinkers and social innovators; each has had a profound and positive impact on the world.

Pathfinders is bursting full of ideas, quotes, stories and models that help us better understand the modern world. I cannot easily summarise the book and this is not a book to read quickly - it is far too rich. But the book is particularly helpful in explaining the real value of ideals like inclusion. It also helps us to understand how our ideals, our dreams, our tools and even our best work can sometimes unravel and leave us frustrated. As John and Beth say:

Ideals are dangerous when they float, disconnected from particular circumstances. Unless grounded in a struggle for a more equal and fruitful relationship person-centred becomes so light a phrase that it can float into any corner of current practice without stimulating any thought or action at all. The right to choose is only a cut-and-paste concept floating in the head when it fails to challenge mind, heart and will to do the hard work of offering real options for housing, jobs and learning and replacing guardianship and paternalistic supervision with effective support for decision-making. Inclusion disconnected from the exhilarating risks of walking through walls to develop contributing roles and relationships is a hollow sound. 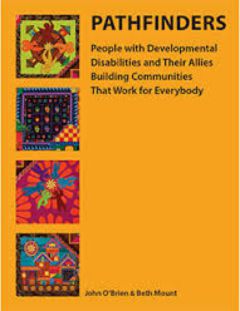 The central idea of the book is captured in the title - Pathfinders. Pathfinders are people with learning difficulties themselves. It is their journey, the new paths they forge, and the alliances and partnerships they form, that will create the new world we are so longing to see come into life. They are pathfinders because this journey into citizenship is not a journey that can made by anyone else on their behalf (although we can certainly do much to help or to hinder their journey).

Over 20 years ago, I remember speaking at an event where John was also present. There I described a series of innovations about which I was personally rather proud: ways of individualising contracts, funding and services. Later that same day John took to the stage and began by observing that the real innovators were people with learning difficulties and their families. This struck me as profoundly true; but it was also a challenge to my own arrogant assumption that I was the innovator. In fact all I was doing was trying to make the path of innovation easier - the really important innovations were being made by people themselves. John’s wisdom then has continued to guide my own effort to try and get things in the right order: innovation (which is just another name for freedom) is the work of citizens themselves - even at their best good systems do no work on their own - they just make it easier for citizens to do the work of citizenship.

Starting with people and their journeys the book helps us understand what does really help people on their journey to citizenship. It also uses the concept of Real Wealth, which was developed by Pippa Murray, as the best way to think about the resources that people have available and which can help people on this journey. They go on to describe how such Real Wealth can be transformed and enhanced as people move into community life. John and Beth describe all the many dimensions of helping and hindering, by other people and by systems; they share fascinating examples of social innovation and they also describe many of the traps into which we can fall along the way.

Interestingly, although both John and Beth have been great pioneers in person-centred planning, they do not push planning tools as the solution. Instead they are keen to help us understand what really lies beneath person-centred planning when it is doing its best work. Here they build on the work of Otto Scharmer and his colleagues, and what they call Theory U.

Theory U is a description or model of deep change - change that is not just superficial (changing words, rules or systems). Deep change is a change that happens within ourselves: our will (changing our actions), our heart (changing our attitudes) and in our mind (changing our patterns of thought). Deep change is the result of a real engagement with ourselves, with others and with the world around us. In fact, for me, it was reminiscent of the thinking of Hannah Arendt, who insisted that political freedom rests in our capacity to question the categories and ideas with which the world seems to be clothed. We can still see things afresh. We are not destined to accept injustice, just because the world is handed to us that way.

This is only to touch the surface; but to repeat, if you already familiar with the work of John or Beth, or of any of the ideas that they are associated with, then you do need to buy and read this book. There is no other book that better helps us to understand the journey we have been on so far; no other book gives us a better way of thinking about our future. It is generous and loving, rich with detail and wisdom.

But now, to my bigger challenge: to show that this book is also relevant to the general reader, or at least, that it is relevant to anyone who is concerned with the justice, the welfare state and the nature of modern society.

One of the problems I find in engaging people’s interests in the experiences and lives of people with learning difficulties is the fact that we have swept the history of the institution under the carpet. Too few people know anything about institutions; or, what they think they know, is based on two contradictory stereotypes:

In fact the truth is very different. Institutions grew rapidly during the late twentieth-century (in the UK they reached their peak for people with learning difficulties in the early 1970s) and they were only closed down because people, families and some professionals campaigned against them and worked hard to close them down. They did this because institutions are inhuman and dreadful. Almost everything ordinary people believe about these institutions is false.

Pathfinders helpfully reviews the history of the institution and, in particular, it draws upon the wisdom of one man who survived it. Thomas Allen went into the institution as a child and left it in his old age. In his autobiography he described what he had to do to survive the institution. John and Beth summarise his learning as follows:

Reading this section I was struck by how easily you might replace 'the institution’ with ‘modern society’, ‘the welfare state’ or ‘our economic systems’. Is there not something institutional in our everyday experience? Do we really live in a society where we are valued and nurtured as a unique and free individual - as a citizen? Or do we live in a society that encourages conformity, obedience and which tries to manage and control our desires? It may be that the institution is alive and well - no longer tied down to buildings and campuses, but roaming free to subvert human relationships and communities.

As Burton Blatt puts it:

The issue we confront in human services is one of fundamental human values - freedom and community. Yet, our hopes and plans for securing these values for everyone are invested in government agencies and public laws, in an approach that codifies and mechanises the ‘delivery’ of values. In holding to our hopes, we have seriously over-estimated the power of bureaucracy.

Does this not describe something of the challenge we face today? After the war we built the welfare state because we needed a system that would provide the essential securities that we needed to live with dignity. But we did so by trusting in the existence of a benevolent, or at least democratically accountable, government, capable of administering justice through a combination of taxation, public spending, bureaucratic administration and professional service delivery. Today the limits of this approach are rather obvious. Bureaucracies and professionals can achieve only so much; and governments (as we’ve certainly found in the UK) can survive even when they seek to erode welfare, rights and justice.

The path out of the current crisis in the welfare state is not going to be found by returning to 1945. After all, we’ve already been there - and we ended up here. The path out of the current crisis is going to be found by following the lead of people with learning difficulties. It is they who can show us what is important in life and how it can be achieved - not by consuming, earning or owning - but by coming together in community. As John and Beth put it:

The future belongs to people with the courage to join together and imagine a community that works better for everyone and then build relationships that make it possible to begin to live there.

If you want to live in that world too then I recommend this book. You will have to immerse yourself in a different world, with unfamiliar terms and unexpected problems. But you will emerge richer and better able to work in partnership with others.

The publisher is Inclusion Press 2015.

Building Community with Beth Mount This film made by Open Future Learning explores the value of finding out about our local communities in order to create…
Review: 05.08.09

Keys to Citizenship A guide to getting good support for people with learning disabilities.
Review: 06.10.11

It's a Cogworld Peter Leidy sings, inspired by conversations with John O'Brien and members of Wisconsin's Developmental…
Paper: 05.09.11

Conversations about Sustainable & Inclusive Communities A report exploring how local leaders influence the interaction of civil society to generate action toward inclusion…
Review: 05.02.16