Nadezhda Mandelstam was the wife of the great Russian poet Osip Mandelstam and her book Hope Against Hope (Nadezhda is the Russian for hope) is the story of her final few years with Osip before he was finally sent by Stalin to the Gulag where he died.

Her book is one of the most powerful testimonies of the period, revealing not just its horrors, but also the emotional and psychological realities of a community overcome by terror. This is not just history - it is the story of how humans can be corrupted by fear and ambition, and what survival really feels like.

Akhmatova and I once confessed to each other that the most powerful sensation we had ever known - stronger than love, jealousy, or any other human feeling - was terror and what goes with it: the horrible and shameful awareness of utter helplessness, of being tied hand and foot. There are different kinds of fear. As long as it is accompanied by a sense of shame, one is still a human being, not an abject slave. It is the sense of shame that gives fear its healing power and offers hope of regaining inner freedom. 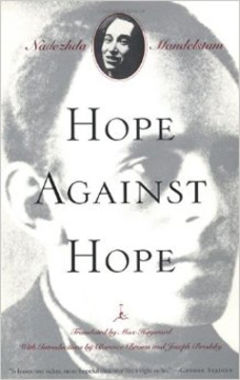 Interestingly, Osip was a greater admirer of Dante and there are significant similarities between Hope Against Hope and Dante’s Divine Comedy - particularly Hell and Purgatory. Just as Dante spirals down into Hell, and up and around the Mount of Purgatory, so does Nadezhda circle around the fate of Osip. The story is not a straight narrative - instead it describes different states of mind, different social responses to terror and the different choices made by individuals. Just like Dante, Nadezhda mixes general points with vivid descriptions of different individuals.

For an English reader the book is also like the Divine Comedy because you do need the footnotes - many characters won’t be familiar to the reader - and it is also useful to keep some of the poetry of Osip to hand. But this makes the book seem like a chore - it is not a chore. It is mesmerising, because a woman, stripped of all hope and of all illusions, can tell you exactly what people are really like - in all their glory and in all their ignominy.

They [the Cheka] summoned people who were afraid of losing their jobs or who wanted to make a career, those who wanted nothing and feared nothing, and those who were ready for anything. The object of all this was not to gather information. Nothing binds people together more than complicity in the same crime: the more people could be implicated and compromised, the more traitors, informers and police spies there were, the greater would be the number of people supporting the regime and longing for it to last thousands of years. And when it is common knowledge that everyone is “summoned” like this, people lost their social instincts, the ties between them weaken, everybody retires to his corner and keeps his mouth shut - which is an invaluable boon to the authorities.

Just as Satan sits at the heart of Dante’s universe, so Stalin is at the centre of Hope Against Hope. It is the short satirical poem that Osip wrote and read, to just a few of his friends, that - by hands that were never known - reaches the secret police and leads Mandelstam into their clutches - and then miraculously (although perhaps helped by their friends Bukharin and Pasternak) Osip is released - although exiled from Moscow.

The fateful poem is short and may not seem so radical:

We are living, but can’t feel the land where we stay,
More than ten steps away you can’t hear what we say.
But if people would talk on occasion,
They should mention the Kremlin Caucasian.

His thick fingers are bulky and fat like live-baits,
And his accurate words are as heavy as weights.
Cucaracha’s moustaches are screaming,
And his boot-tops are shining and gleaming.

But around him a crowd of thin-necked henchmen,
And he plays with the services of these half-men.
Some are whistling, some meowing, some sniffing,
He’s alone booming, poking and whiffing.

He is forging his rules and decrees like horseshoes –
Into groins, into foreheads, in eyes, and eyebrows.
Every killing for him is delight,
And Ossetian torso is wide.

We often talk about the Emperor who has no clothes, but we don't remember that it took a child to point to the Emperor’s nakedness. In Russia, when a poet dared criticise the great leader there was no community to join the child’s mockery. Instead fear and terror took over.

How far away from this madness are we? It would be silly to suggest that modern Britain is like Stalin’s Russia - it is not. But I am struck by how quickly fear can spread. In the past few months I have been talking to some of the large charities who work to defend the interests of disabled people, people with mental health problems, or people with visual impairments.

Each conversation reaches the same point - we agree that current policies are bad and dangerous - but the charity says that they can’t possibly say this publicly. For they have too much to lose:

“We meet regularly with the DWP, we think we’ve been able to reduce the damage of their policies, we’d lose the chance for these meetings if we spoke out.”

“If we speak out it would be considered political - the Right-Wing press and the Charity Commission would start picking on us and we might lose public support.”

“We can’t be too negative - we need to offer them positive solutions.”

“There are real things we can still do, amidst madness; campaigning doesn’t work, we must just stick to practical things where we can make a difference.”

And behind these reasonable responses it’s hard not to think that other factor might be having an influence on the CEOs of these charities:

That all sounds terribly judgemental on my part doesn’t it? But what are the lines we will not cross in order to have influence and be powerful? What does integrity mean when everything you believe in is under attack? When does the failure to resist make you complicit with things that you disagree with?

Nadezhda’s final hope was that a new generation would emerge, able to look back on the sins of their parents and grandparents and able to see the truth of things, able not to lie to themselves about the world they were in. And in particular she dreamed that her husband’s poetry would survive as testimony for future generations. So she hid, memorised and transcribed everything she could - sharing it out amongst a group of trusted friends.

This for me is the abiding memory of her book - not just her resilience - but the fact that even in the midst of a human hell she could find some friends, people who stayed true, despite everything.

These words from Thomas Merton comes to mind:

Do not depend on the hope of results. You may have to face the fact that your work will be apparently worthless and even achieve no result at all, if not perhaps results opposite to what you expect. As you get used to this idea, you start more and more to concentrate not on the results, but on the value, the rightness, the truth of the work itself. You gradually struggle less and less for an idea and more and more for specific people. In the end, it is the reality of personal relationship that saves everything.

When we are tempted to lose the plot and go along with things we know are wrong then it is our family and friends that will help us stay true. And perhaps they will remind us that that honours, riches or seeming securities offered by the powerful are all just shabby goods - not what really matters.

The publisher is Random House Inc.

A Fair Society? Produced for the Campaign for a Fair Society, this report shows how government cuts in the UK target disabled people.
Article: 12.11.13

Working with 'Vulnerability' A summary of a talk given by Dr Simon Duffy at the meeting of Churches Together in South Yorkshire, Spring Forum in April…
Paper: 02.06.14

Working on the Inside Kate Fulton offers insight into the inner dimension of change that is essential to working respectfully and with…
Paper: 26.06.14