The Special People - A Fable 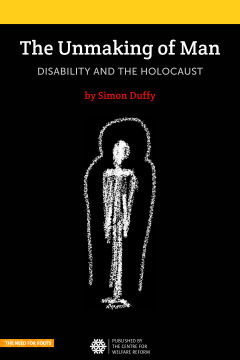 This is an excerpt from Simon Duffy's book The Unmaking of Man.

The book explores the experiences of disabled people during the Holocaust and the lessons we can learn from history and what might still be relevant today.

The central argument of the book is condensed into the following fable.

Once, not too long ago, in a land not far from here, there was a very special people. They were different from the other people who lived in that land, and although there were many special people, there were still many more who were not so special.

To that land there came some very difficult times. Many people did not have work, or a purpose of their own; people felt disconnected from each other. Many began to believe that life was a competition, a race that must be won. Some people really wanted to win that race, but many more were simply frightened that they might lose the race. Some people said that if the people of the land united and worked together then they could win the race. But they did not really know what unity meant. Then someone suggested that unity was purity, that the real enemy, was them, those special people. They were the enemy, because they were not the same as everybody else. They were too different.

Then experts and professionals came forward; they said they could ascertain who, scientifically speaking, was special; for it was not always so easy to say who was special. And so doctors and scientists set up commissions, institutes and working parties. They published books and produced theories to describe what made these special people the way they were, and they started to test the population to ascertain whether or not they were special. Some people even came to them willingly, in the hope that the tests would show that they were not special.

Then the experts and politicians decided that it would be important for the whole society to organise itself better in the future in order to stop the spread of these special people. The people must be marked off as special, they must be stopped from breeding and certainly they should not breed with the other people of the land. They must be separated so that they could not infect others; they must be made poor so that they were weak and could do less damage. The law of the land must recognise that they were different and did not deserve the same rights as the majority of the people.

Amongst the special people themselves there was much fear and confusion. Many people had long been ashamed of their special status and hoped to get rid of it. They had wanted, and expected, equal rights with other people of their land and even when these were taken away they could not believe that the society which they had always wanted to be a part of could really turn its back on them. Others were proud of their special status; they had always mistrusted the people that they lived amongst; they wanted to create their own world where they would be safe and respected. Unfortunately these very different attitudes, conspired to make the special people even weaker. Sometimes they even organised themselves in ways that seemed to help the majority do them harm. Things became so bad that any change began to seem like it might offer something better. In a world where everyone was so hostile, staying together, away from other people, may even appear to offer a glimmer of safety.

Of course, the effect of all these evils could be felt within the land itself. Although the process of coercion, sterilisation and murder was meant to be locked up, inside the walls of the special places, it was impossible to stop the fear and the horror from leaking out and infecting all the land. Many felt some portion of the fear that was felt intensely inside those places; and they wondered what could keep them from a similar fate. Many knew that, with these crimes unpunished, justice was a fraud. These places of evil, although remote and cut-off from normal life, quietly radiated their evil back into the rest of the land. The people of the land fled from that evil, but it caught up with them. Eventually they had to confront the horror that they had created.

If you want to read more about the history of disability and the Holocaust and think about the lessons we can learn then please have have a look at The Unmaking of Man in our store.

The Special People - A Fable from The Unmaking of Man © Simon Duffy 2013.