The Material Conditions of Freedom

This short and accessible book provides a perfect introduction to the concept of the Basic Income or Citizen’s Income. It is to be recommended to anyone who sees that the current approach income security, developed during the first half of the twentieth century, now looks out of date and increasingly unjust.

Basic Income is an income paid by the state to each full member or accredited resident of a society, regardless of whether he or she wishes to engage in paid employment, or is rich or poor or, in other words, independently of any other source of income that person might have, and irrespective of cohabitation arrangements in the domestic sphere. 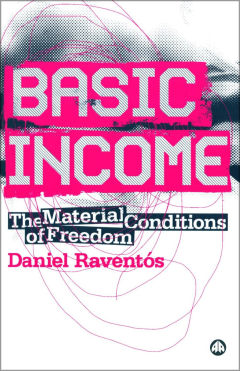 As followers of The Centre for Welfare Reform and the Campaign for a Fair Society may notice, this is a narrower model than that set out in A Fair income, for it comes down definitively on the side of a citizenship-based (rather than a family or household-based system). And one of Raventos’ powerful arguments for this position is that this supports gender equality more effectively.

Overall the book is best at setting out the philosophical case for a Basic Income. He pursues two strategies, first he demonstrates that the Basic Income concept would helps resolve problems inherent in the leading political theories of today: socialism, liberalism (or as some prefer ‘neoliberalism’) and social democratic (e.g. the theories of John Rawls).

It was particularly interesting to notice his summary of the position taken by the liberal thinker Steiner. As Steiner argues, if it is accepted that we all have equal share in the Earth itself and the properties (including our genetic inheritance) produced by Nature, then liberalism demands a much more radical redistribution of resources than many liberals suppose:

It is perfectly in keeping with libertarian principles to effect an egalitarian redistribution of the part of the global income that corresponds to the value arising from the incorporation of natural resources into private goods. A tax on natural resources would therefore be just. There are two other taxes which are just for a libertarian: inheritance taxes and taxes on genetic endowments, Steiner compares these with natural resources and, as a result, they too would be subject to redistribution.

This argument offers a particularly interesting counter-blast to the meritocratic arguments of those, like Boris Johnson, who believe their (supposed) genetic endowments somehow entitle them to greater rewards. Instead it is argued that, as such endowments are unequally distributed, then those most blessed should be most taxed. Likewise, those of us who are least blessed are rightfully entitled to compensation.

The second key strategy is to set out the case for what Raventos calls democratic republicanism. Raventos shows that the Basic Income idea flows naturally from a commitment for self-rule for all citizens. He roots his account in a critical reading of Aristotle and Cicero, arguing that these were only one kind of republican thinker. The tradition he wishes to support is revealed in the democratic reforms of Ephialtes - who gave the citizens of ancient Athens the right to a modest salary to enable them to participate in its government. And also in the positions of Thomas Paine and Robespierre, who wrote:

What is the primary aim of society? It is to maintain the inalienable rights of man. What is the foremost of these rights? The right to exist. Therefore the first social law is that which guarantees to all members of society the means of existence; all others are subordinate to that; property was instituted and guaranteed only in order to cement that law; if property is held it is first of all to live. And it is not true that property can ever be in opposition to the subsistence of men.

It seems to me that arguing for this right to exist is going to be one of the critical elements of a wider movement to achieve a Basic Income for all. And, as Raventos argues, this right is an essential requirement for members of a free society. If we are not secure in our right to exist we will enter into an unhealthy dependence on the will of others. We cannot be free:

Formal freedom is conditional in a very precise sense: without resources it cannot be real. Real freedom includes formal freedom but has the additional requirement of resources.

Hence the subtitle of his book - the material conditions of freedom.

The book goes further in setting out the arguments against the Basic Income in some detail. These are all interesting and many of these counter arguments are similar to those found in A Fair Income. In particular it is worth reflecting on how current government policies do tend to recognise the ongoing failure of the current economic system to deliver an adequate income for all - yet lack the courage to take the next logical step. Instead of providing a real right for citizens, politicians flirt with complex subsidies for employers, minimum incomes, tax credits or, in the UK, the baroque Universal Credit system.

What political leaders are not currently prepared to do is to shift their thinking away from meritocratic tinkering towards something that is universal and expresses faith in the citizenry. As Raventos argues, citing Noguera:

Basic Income is precisely a strategy that attempts to provide a right to an income for everyone but not at the cost of the right to work. Rather it consists in distributing employment subsidies directly into the hands of potential employees so that they (and not the employers) can decide what jobs merit the subsidy.

In other worlds, the Basic Income idea is not anti-work - but it presumes that citizens are the best people to define work, find work and to decide what balance between the different kinds of work is right for them and for those they love.

His book ends with an economic analysis which demonstrates the feasibility of a Basic Income system. In my opinion it would also be useful to help our leaders see that a Basic Income is in fact a much better way of building on the simplicity and clarity of the state pension and child benefit. Attempts, like Universal Credit, to reduce poverty traps by the complex intermeshing of PAYE and the benefit system should be abandoned. Instead we should turn benefits, tax credits and tax allowances into one simple Basic Income.

The publisher is Pluto Press.

A Fair Income Simon Duffy explains how the tax-benefit system can be reformed to promote citizenship and families.
Paper: 08.01.14

Basic Income Security This paper by John Dalrymple and Simon Duffy sets out a proposal for the reform of the income security system in an…
Article: 18.09.14