There are many parts of the world in which communities are being damaged by intractable conflicts. Education in its broadest sense provides a key vehicle for building the peace. Thinking particularly about the current situation in Colombia where peace talks between the government and armed revolutionaries are at an advanced stage, David Towell offers this review of a recent book which offers a curriculum for sustainable peace.

Over the past eight years, the main focus of the Centre for Inclusive Futures' international contributions has been Colombia. Working with grass roots leaders and local education systems, now in five municipalities, the aim has been to promote Education for a Better Tomorrow (to quote the title of a recent pamphlet). The key theme of this pamphlet is that education should prepare young people to contribute as active citizens to building communities in which people live in harmony with themselves, each other and the natural environment ('Pachamama').

An important context to this work - indeed to any community-based initiative in Colombia - is the long-running armed conflict and its massive consequences for community life. There has been more than 50 years of civil war between government forces and armed revolutionaries, complicated by the participation of right-wing paramilitaries and the violence associated with the illegal drugs trade. Six million people (20% of the population) have been displaced from their homes and land, mainly in rural areas; there have been many thousands of casualties; young people have had their education disrupted and many have been recruited into gangs and the armed conflict itself; the wider culture has become somewhat inured to violence and corruption; and there is often a lack of trust in public institutions.

Currently however (although by no means for the first time) there is a major public initiative to end the conflict. Significant progress is being made in the Havana 'peace talks' between government and the FARC (the revolutionary armed forces of Colombia), even if many ordinary people remain sceptical about the outcome.

Clearly ending the armed conflict is only one small but vital step along the path to creating a sustainable peace which addresses the damage done to Colombia over the past decades and builds a more just and inclusive society. In this larger task, education in the broadest sense has a potentially critical role. One of the civil society associations active in strengthening the peace process, Red (Rodeemos el Díalogo - roughly translated as 'Embracing the Dialogue') recently joined with University and other allies to organise a two day Conference (29&30 June, 2015) in Cambridge addressed to the question 'How can the education sector contribute to sustainable and long-lasting peace in post-agreement Colombia?'

Of course there are many dimensions to this question. One conference contributor, Senator Claudia López, argued for doubling investment in the education sector from the early years onwards, especially in rural areas, to ensure greater equality of access to quality education and address the needs of the many children growing up in conditions of vulnerability. One part of this effort needs to focus on reincorporating young people into education who have been 'lost' to the conflict.

Another contributor, Julián De Zubiría, argued for a radical change in the culture of Colombian education, away from the current emphasis on transmitting knowledge to a more developmental approach which sees education as a route for young people to develop their competencies, for example in applying ethical principles, thinking critically and showing empathy for others.

A curriculum for sustainable peace 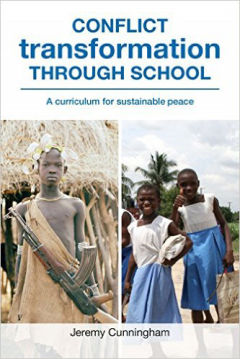 Complementing both these contributions was a presentation from Jeremy Cunningham, based on his recent book which is the subject of this review. The sub-title of Cunningham's excellent book is A curriculum for sustainable peace. By 'curriculum' he means the total experience of students in school not just what is formally taught in the classroom and so he is concerned with both the processes and content of learning.

The empirical part of Cunningham's work is a detailed study of education in post-conflict Northern Uganda and a review of experience in three other post-conflict societies: Cambodia, Rwanda and Northern Ireland. There are significant differences in the history of these countries and the scale of the conflict and so a comparison points to the importance of careful attention to the context in every case, when thinking about curriculum.

Most helpful to our interest in Colombia, Cunningham goes beyond extensive earlier work, for example on peace, human rights and citizenship education, to suggest an original framework for curriculum development which can be simply summarised in terms of a 3 x 3 matrix (although arguably all the nine boxes are inter-connected).

This matrix identifies three key concepts in conflict transformation which he defines as follows (page 149):

'Truth-seeking means attempting to uncover and analyse the sources of civil war and acknowledging the suffering of victims. It includes the understanding that there may be varying truths, depending on the perspective of the viewer. Reconciliation denotes the readiness of former opponents to live alongside each other, laying aside the desire for revenge and cooperating for durable peace. Inclusive citizenship means the process by which diverse groups are actively supported in participation at all levels in their own society with the aim of improving the quality of life for all.' He also distinguishes between three elements of what is learnt through the curriculum: knowledge and understanding; skills; and values.

Of course, filling out this matrix with detailed curricular proposals needs to take account, as we have already said, of the particular context - for example, whether there has been some form of 'Truth Commission' to produce a widely acceptable narrative about the causes and course of the conflict - and the age of the children being considered.

Based on his own work, Cunningham offers this version (See below, page 150) of a full matrix which provides a useful stimulus for thinking about what will be most important in Colombia.

So, attending to the whole school experience, invites us to think about what can be accomplished in the play-ground, playing fields and after-school clubs as well as in the classroom. The matrix as a whole encourages us to treat students as developing citizens with rights and responsibilities, who can learn about later political participation by being active participants in developing their school. In turn, this may lead us to consider ways in which students can be a part of identifying the rules for class-room behaviour including those which relate to settling disputes peacefully. 'Walking through different boxes' in the matrix, we can also think for example about how listening to victims in a safe environment (either directly or perhaps through the mass media) can contribute to building understanding and empathy.

Similarly one aspect of understanding reconciliation may need to involve critical thinking about the tensions which exist between justice and the requirements of a negotiated peace. For older students, problem-solving and deliberative discussion skills might be advanced through examining the ten suggestions in Adam Kahane's book Solving Tough Problems (which includes a discussion of an earlier stage in the Colombian peace process). One focus of the exploration of the values underpinning inclusive citizenship might well be about the importance of equal respect for both genders. And so on.

Of course, school principals and teachers may themselves need support (and some might say better rewards) for developing their competencies in these processes and schools themselves are part of their communities so these efforts need to be reinforced by wider efforts to make space for constructive dialogue and community-building.

Finally, we would argue that while the curriculum for sustainable peace is vital in post-conflict societies, students (and developing citizens) everywhere can benefit from opportunities to develop their competences in relation to truth-seeking, reconciliation and inclusive citizenship. Jeremy Cunningham's book is an excellent starting point for this endeavour.

The publisher is Trentham Books.

Civic Partnership David Towell examines how citizen groups and local authority leaderships can work together to create the civic…
Paper: 18.09.13

Education For A Better Tomorrow In this important paper Heidy Araque and David Towell explore the relationship between the education system and the…
Paper: 22.05.12