These 3 stories were shared with permission as part of the SKILLS project and the development of the self-directed support network.

Samuel is a 49-year-old man who is active in his hobbies. He likes cars, music and actively participates in the activities of the Finnish CP Association, through which he can influence things important to him. Samuel works as a sound engineer and has his own company. He also works as a traffic controller at festivals in the summer. Samuel has had a driving license for 30 years, and he drove the bus for 13 years.

In his everyday life, Samuel needs help with issues related to health, hygiene and housekeeping. He occasionally needs a personal assistant for everyday errands as well, but he can handle most things himself. In the winter, Samuel also needs help with moving around, as it is challenging to use a wheelchair in the snow. Thanks to the Services and Assistance for the Disabled Act, Samuel has been entitled to transportation services for a long time, but he has made use of them very rarely. This is because Samuel has always had his own car and he likes to drive.

Samuel’s transportation services were significantly reduced about a year ago, and now he receives financial support from the city for his own car. Samuel collects and stores the receipts for fuel, essential repair costs, insurance and vehicle inspections, and delivers them to the Disability Service Office every month. Using his own car has been much cheaper than the transportation service.

What has changed: For Samuel, being able to use his own car means freedom: freedom to move where he wants to, when he wants to. The city’s transportation services can only be used in specific areas, and Samuel had to plan his schedule according to them. Although Samuel used his own car frequently also before self-directed support, he feels that his quality of life has improved significantly after the start of the support.

Samuel’s home-help service provider employs less than ten people. Thanks to this, each employee knows Samuel, and the information between the employees flows smoothly. Although a practical nurse visits Samuel frequently, the private company’s nurse is also easily available. Samuel feels that it is easy for him to get answers to his health-related questions from the home-help service’s nurse, which has led to a decrease in his visits to the health center.

Self-directed support has brought freedom and feelings of equality to Samuel’s life. He wants to use the service responsibly, however, and repairs his car himself if he can, for example. Samuel also sees the new arrangement as positive for the city: Now that he does not have to apply for additional trips when traveling outside the transportation service area, the social workers have more time to spend on other clients. Since Samuel has been driving a car for 30 years, it is also very important for him that his know-how, skills and love for driving are recognized in his personal budget.

Sami is a 30-year-old young man. He is interested in heavy machines, Finnish music, photographs and good food. He has his own computer that he uses to listen to music and to look at photos. Sami exhibits distinct characteristics of autism spectrum disorder and has a visual impairment. It is extremely difficult for him to express his emotions and what he wants to do, and he has trouble leaving home. Sami takes part in daytime activities a few days a week. He lives in a housing unit with 12 other residents.

At first, we tried to find a place where Sami could look at heavy equipment and find information regarding them on the internet. However, Sami was not as excited about this as we expected, so we had to change the plan.

We started visiting the local supermarket with Sami. The morning usually goes like this: First, we go to physiotherapy at the public swimming pool, then we go shopping at the supermarket, have lunch at a burger restaurant, and finally visit a store where we can print some photos on A4-sized sheets of paper for Sami’s home. Sami’s half-day daytime activity was changed to self-directed support to finance this.

What has changed: To make leaving home easier, Sami picked a CD that he would listen to in the car with the employee. A few months after the start of self-directed support, Sami no longer took the CD with him, but rather wanted to listen to the radio. During one drive, much to the employee’s surprise, Sami said: “I want to talk with you,” and the radio was not turned on during that trip. Leaving home has become considerably easier now, especially during the self-directed support days.

When having lunch at the burger restaurant, Sami has been able to express his will a few times, which he has not done before. Once, to the surprise of the employee who was walking past the cashier, Sami ordered a Coca-Cola for himself instead of a Fanta without anyone suggesting this to him.

We can see that self-directed support has been a success also because Sami is very happy and cheerful on these days. One time, when Sami was returning used bottles at the supermarket before going shopping, he said: “This is the best job ever!” When sitting in the car, Sami once spontaneously said: “You know what: I’m happy now!” For the employee, this really tells that the day has been a success. Sami also really looks forward to the self-directed support days. “It’s rewarding that we can actually talk with Sami about other things than just about who will come work with him in the evening or what’s for lunch,” says the employee responsible for Sami’s personal budgeting.

Sami’s personal budgeting has also resulted in changes to another tenant’s support solutions and services. An employee at the housing unit says that without the changes made to Sami’s services, they probably would not have even thought about changing Eeva’s services, too.

Vilma is a 32-year-old young woman who loves horses and ponies. She lives in a housing unit with 24-hour support services. Vilma exhibits characteristics of autism spectrum disorder, and her behavior can be very challenging at times: there is always one extra employee present at the housing unit in the mornings just for Vilma. The other half of Vilma’s body is much weaker than the other. Vilma takes part in daytime activities a few days a week. Vilma speaks very little and can often be very impatient.

At first, we used self-directed support to get a job for Vilma at a local clothing store. This experiment failed because of the high turnover of employees, however. After giving the matter some more thought, we remembered Vilma’s previous visits to the stables.

Support was organized through personal budgeting as follows: We reduced the number of daytime activity days by one per week and transferred the money left over to the housing unit, which used it to enable Vilma’s stable visits. Vilma is always escorted to the stables by the same employee, but once she arrives there, she is instructed by the stables’ own employee. We experimented with this arrangement for a few weeks, after which the experiment was evaluated. All parties agreed that the visits should continue, as they have for just over a year now. Vilma spends 45 minutes at a time at the stables.

What has changed: Vilma is very anxious most of the time, but she always relaxes at the stables. She can focus just on the pony for the entire 45 minutes, which is a very long time for her. At the stables, Vilma does not get frustrated or upset when she is given instructions, but accepts guidance very well.

The employee says that even though visiting Teppo the Pony does not help with Vilma’s outbursts of anger at home, the visits add a lot of content to her life. The stable visits are an activity shared by Vilma and the employee and a good topic of discussion for them. At home, Vilma wants to share her feelings of success with the other residents and employees.

Visiting Teppo is also physically important for Vilma. When tending to the pony, Vilma moves around in a way similar to physiotherapy. She has started to use both of her hands instead of just the stronger one when caring for Teppo without anyone urging her to do so. Vilma’s other hand is much weaker than the other, so everyone was amazed when she started guiding the pony in a completely straight line. This requires Vilma to pull on the reins equally hard with both hands.

The employee responsible for supporting Vilma thinks about what the stable visits have added to Vilma‘s life. Although no major progress has yet happened at home, the employee sees huge potential for progress. One year is a short time to achieve great results. When the employee sits and watches Vilma humming to herself happily and complimenting herself, the thing that comes to mind is: “If this can help reduce Vilma’s anxiety and negative mood even for a short while once a week, doesn’t that mean it’s all worth it?”

In addition, check out these other stories

Michelle and NDIS Dell Stagg describes how she rescued her daughter from an institutional service and the need to respect families in the…
Story: 11.01.11

Keith Achieves Citizenship Keith has been able to move away from institutional living and achieve real citizenship under his own control.
Story: 11.01.11

Adam and his Family are in Control Adam has returned from an out of area placement to take up life as an active citizen.
Story: 18.01.16

Carla Uses an ISF Jenny Date describes how her daughter Carla uses an Individual Service Fund (ISF) so that she can have flexible support…
Story: 18.10.11 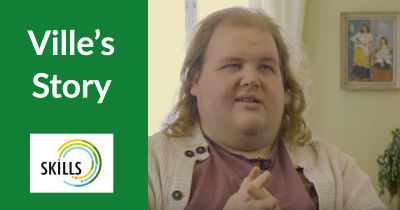