Adam and his Family are in Control

Adam with support from his Mum, Sarah, has taken control of the direction of his life after turning down the offer of an out-of-county placement at a specialist college. Using his individual budget flexibly, with support from his family and friends, Adam has become a valued member of his community; including holding down a full time job at his local supermarket.

Control – Adam is supported by people who know him, love him and care about him to make key decisions that affect his life. Adam’s Mum, Sarah, has learnt to listen to him and makes sure that his voice is heard by others.

Direction – Adam has his own plan for his life and has already achieved many of his goals, including traveling independently using his bike and public transport.

Money – Adam has had an individual budget for 4 years. Although this was considerably less than the money that would have been spent had Adam attended a specialist college in another county as his care manager had suggested, it was still enough for him to make some real changes in his life. As a result, Adam has been able to achieve more independence and at his last review his allocation of money went down but still remains sufficient to meet his needs and for him to achieve his goals.

Home – Adam lives with his Mum at home; this was his choice rather than moving to another county as suggested. Now he has gained more confidence and with the support from the connections he now has in his community he is hoping soon to move into his own house.

Support – Adam is able to get the right level of support and the flexibility needed. He uses some of his money to buy respite when he needs it from a service provider. This means he can achieve the things he really wants to do.

Community – Adam has been supported by his family and friends to make real connections in the community, so that people know Adam and he knows them. He has gained enough confidence and the skills needed to hold down a full time job in his local supermarket. He is now contributing fully to the community, has a valued place in it and is less dependent on the state for financial support.

Adam and his Family are in Control © Don Derrett 2011.

Planning with Families Pippa Murray summarises the main things you need to do to help families plan for themselves and disabled family…
Paper: 29.06.11 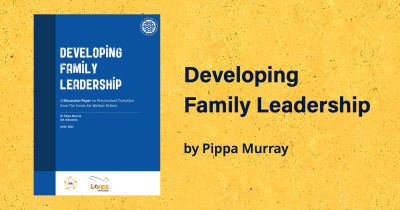 Developing Family Leadership How you can really help families take the lead - without burdening them or blaming them - but by building new…
Slide: 25.10.12

Family Leadership Pippa Murray of ibk initiatives describes how the key to real empowerment lies within - in the human spirit.