My favourite philosopher, without a doubt, is Hannah Arendt. So it was with great pleasure that I discovered a recently published book of interviews with her - The Last Interview and Other Conversations. I was not disappointed. 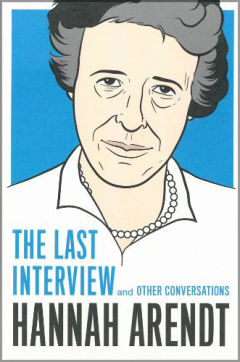 Those familiar with Arendt know that she is hard to put into any category. As the leading analyst of totalitarianism she was a severe critic of every kind of grand theory and ‘ism’. Instead she tried to look at things afresh, and asked her readers - not to agree with her - but to really think about the world around them.

If necessary she applied old words in new ways, or she tried to dig out the truth in an old meanings that we’d lost and forgotten along the way. If she commented directly on modern politics it was often in ways that many people - of all political persuasions - found very challenging. She refused to to fit neatly into anyone's pre-defined philosophy.

However the format of an interview tends to simplify things, and these interviews often forced Arendt to be more straightforward and direct in her statements. One interview is particularly interesting, because Arendt comments directly on the great conflict of the twentieth century - capitalism vs. socialism. Her view is clear and damning:

…the alternative between capitalism and socialism is false - not only because neither exists anywhere in its pure state anyhow, but because we have here twins, each wearing a different hat.

The reason that Arendt believes this is that she sees capitalism as fundamentally about - expropriation - glorified theft - the growing control of property by the wealthy, to the disadvantage of the poor. However she rightly observes that socialism - in practice - is even worse, because it transfers control of property to the state, who can go further than the wealthy to rob and exploit, because they can also have the full force of the state behind them.

Arendt recognises, unlike so many Marxists, that expropriation is wrong because human beings need property. Property is not theft, rather (in Simone Weil’s words) it is a vital need of the soul. Justice demands, not the end of property, but the fair distribution and protection of property rights. Property must be defended both from the capitalist and from the state.

Theories like Marxism and liberalism (or as it is has recently been renamed ‘neoliberalism) provide very little that is useful to us. In practice, as Arendt goes on to observe, the closest we have got to finding a better balance is through the creation of the welfare state:

All our experiences - as distinguished from theories and ideologies - tell us that the process of expropriation, which started with the rise of capitalism, does not stop with the expropriation of the means of production; only legal and political institutions that are independent of the economic forces and automatism can control and check the inherently monstrous potentialities of this process. Such political controls seem to function best in the so-called welfare states whether they call themselves socialist or capitalist. What protects freedom is the division between governmental and economic power, or to put it in Marxian language, the fact that the state and its constitution are not superstructures.

This seems fundamentally true and yet, even today - 44 years since Arendt made this observation - it is still scarcely understood. Modern intellectuals continue to behave as if either capitalism or socialism are a good thing - rather than two terrible twins. The welfare state, instead of being respected as an essential requirement of the modern age, is treated like some hindrance or cost. We are a long way from seeing how things really are.

What is also interesting about Arendt’s analysis is the idea that “only legal and political institutions that are independent of the economic forces and automatism can control and check the inherently monstrous potentialities of this process.” Today, as we experience on-going attacks on the welfare state, whether in the name of liberalism, modernisation, the market, or austerity, we find that the very institutions that we had expected to resist these attacks are increasingly unable to do their work.

This is what modern defenders of the welfare state must do, they must understand the conditions that can really protect people’s rights and which can check the forces of expropriation - protecting people from both the state and from capital. This whole issue requires much more thought and more careful analysis; but a good place to begin might be to examine what has gone wrong in the UK, and why the welfare state has lost much of its institutional protection.

Here’s my top ten factors currently leading to the destruction of the welfare state:

I am sure that this list can be extended. I am sure that the priority order of this list can be improved. It might even be possible to objectively compare the rate at which different welfare systems are currently being undermined by comparing the different reactions of different welfare state’s to austerity. My own suspicion is that the rather rapid decline of social justice in the United Kingdom is linked directly to specific structural features of our society and to our political system. For instance, the fact that UK is highly centralised, and that our electoral system encourages a narrow focus on swing voters, both serve to corrupt the workings of the welfare system.

This may seem a long journey from my starting point - a review of Arendt’s book - but it is exactly the kind of journey that Arendt encourages. We must start to open our eyes and look at what is really going on. Often, as Arendt observes, intellectuals are “trapped by their own ideas” and so they lose the ability to understand the true nature of what is right under their nose.

The publisher is Melville House Publishing.