Citizenship in an Ageing Society

The philosophical ideas of liberalism and utilitarianism, which still dominate social science and policy-making, are inadequate and dangerous. Instead we should focus on an approach to social justice which focuses on the achievement of citizenship for all. A commitment to citizenship is how societies can ensure that difference is valued and that frailty and disability become, not barriers, but bridges, to stronger communities.

For thousands of years people have struggled to achieve citizenship - to be seen as an equal and to possess the rights and duties that go with citizenship. But we’ve forgotten the true meaning of citizenship. In fact, the current welfare state, which should support people to be citizens, often turn us into tax payers, service users, consumers or patients. This is not just wrong; it is unsustainable.

Of course, an idea like citizenship, which has been around for more than two millennia, has been subject to shifts in meaning. Today it is often reduced to voting, holding a passport or being entitled to certain legal rights. While these are important, they do not take us to the core meaning of citizenship. The fundamental purpose of citizenship is to enable us to live together as equals, to treat each other with respect. Citizenship is not a natural condition, rather as Hannah Arendt explains, it is a state of equality, that we create together, when we bring people together in the spirit of justice to form a community of equals:

“Aristotle explains that a community is not made out of equals, but on the contrary of people who are different and unequal. The community comes into being through equalising, isathenai.”[1]

In other words, a just community is a community that brings those who are unequal together as equals - we clothe each other in equal citizenship. This is not just a formal matter - a willingness to call each other citizens - instead it demands attention to all the ways in which we live and work together. True citizenship will be reflected in our socio-economic arrangements, in the distribution of rights and duties and in the wider political decision-making processes; in other words, in our democratic systems.[2]

This is very relevant to the challenge we face in an ageing society. We worry that there will be too many old people, needing assistance from those who are younger - we start to see old age as a burden. But we also worry that our society will not treat older people respectfully, particularly when they need assistance. These two worries feed off each other; for it is hard to respect someone we see as a burden; and we treat as a burden those we disrespect.

But, in fact, it is these worries themselves, that should worry us. There is no ‘demographic time bomb.’ Instead we live in inordinately wealthy societies, where people are living longer, healthier lives, and with a lot more to offer each other. The fact that we don’t see it this way is our real problem. We do not respect the true value of older people.

In a fascinating paper, Nunkoosing and Haydon-Laurelut explore what causes abusive or positive relationships in ‘care settings.’[3] They argue that we misunderstand respect, by treating it as equivalent to affection - being nice to someone. However it is quite possible to be nice to someone, and yet not respect them. Respect combines acceptance, with an optimistic view of the person’s place in the wider world - seeing their potential for contribution and looking to the community to value that contribution. 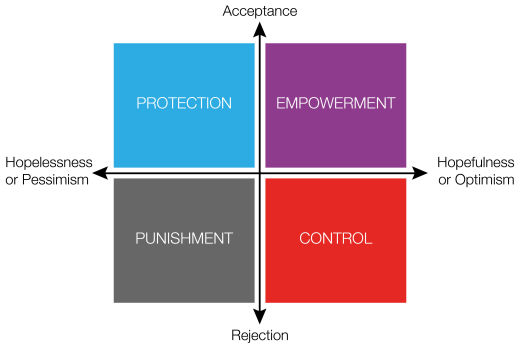 Figure The Relational Basis of Empowerment

This is a very helpful analysis. It better explains the nature of respect, and it helps us to understand some of the less respectful views about older people. For many people do have a ‘caring’ attitude, but they combine this with a very negative attitude towards the world, and the place of older people in it. This leads to protective behaviours and to segregation; this in turn encourages others to see older people as somehow living outside ordinary life.

On the other hand, we also hear from politicians and policy-makers, very positive-sounding accounts of old age and of older people. Yet these accounts are often combined with a distancing and dehumanised approach, which tends to treat older people as objects to be incentivised, managed or secured. Older people are not fellow citizens, in control of their own lives; instead they are treated as atomised objects of government policy. Government too often tries to control rather than empower.

In fact, modern public policy has no grasp of the meaning of citizenship, nor interest in the true nature of equality. Instead it is dominated by two contradictory philosophies. First, there is liberalism - often renamed neoliberalism - which stresses the need for each of us to ‘look after ourselves’ (as if we all came out of the womb dressed, and ready to go to work). Second, there is utilitarianism - which stresses the need to maximise happiness, and is prepared to transfer significant levels of power and control to the state, in the hope that it may help us achieve this rather vague goal.

The fact that these two philosophies are obviously contradictory (and false) does not seem to have weakened their hold on public policy. Moreover both are dangerous philosophies for any group that is identified more by its needs than by its contribution. If you see human need as a cost, rather than as an essential part of our humanity, as these philosophies tend to, then the consequences can be dire.[4]

In this context the recent emphasis on Consumer Directed Care in Australia should give us pause for thought. The original meaning of a ‘consumer’ is one who “squanders, destroys or uses up” also, the root meaning of ‘to care’ is to “grieve.”[5] These are not useful concepts to helping us eradicate a negative or passive conception of people in old age.

Citizens are not consumers. Citizens live together, build together and work together. Citizens are free; but they also understand that they are part of a shared community, for which they are responsible. Citizens are different, and they value those differences, partly as means to greater contribution - as their gifts. Older people should be our role models for citizenship, respected not just for their past, present and future contributions; but respected also because, as their needs grow, they can give others the chance to thank and honour them with respectful assistance.

[3] Nunkoosing K and Hayden-Laurelut M (2013) The Relational Basis of Empowerment. Sheffield, The Centre for Welfare Reform.

[4] Duffy S (2013) The Unmaking of Man: Disability and the Holocaust. Sheffield, The Centre for Welfare Reform.

This paper is based on the Sir Keith Wilson Oration that Dr Duffy gave at the Australian Association of Gerontology Conference in Adelaide in 2014. Our thanks to ACH Group for making this possible.

Keys to Citizenship A guide to getting good support for people with learning disabilities.
Review: 17.09.14 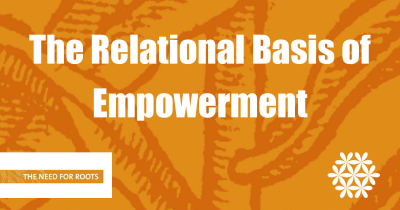