Since 2010 the UK Government, perhaps more than any government in the world, chose to particularly target disabled people for cuts after the 2007-08 financial crisis.

It this made people who often face disadvantage and poverty pay for the mistakes of politicians and bankers. Extraordinarily the level of public attention to this issue by the mainstream media has been minimal and the Government has so far avoided all responsibility for its actions.

The publisher is Anton French Films.

Unfair Cuts in Detail The current social care system in the UK is deeply unfair and needs reforming; however current efforts by Central…
Article: 29.06.11

Cuts to UK Benefits Ben Baumberg of the LSE provides an overview of the cuts in UK benefits and how they target disabled people.
Paper: 12.02.14

Counting the Cuts This report was one of the first quantitative analyses providing an estimate of the cumulative impact of UK Government…
Film: 26.09.12

Cuts Target Disabled and Poor This short film shows how the UK government's spending decisions have targeted disabled people and the poor for cuts.
Article: 02.04.11

Briefing on How Cuts Are Targeted This briefing provides a summary of the findings of the report A Fair Society? and some important facts and figures.
Paper: 04.03.11

A Fair Society and the Limits of Personalisation This discussion paper describes how the current cuts that target disabled people reflect deep flaws within the…
Paper: 16.01.13

A Fair Society? Produced for the Campaign for a Fair Society, this report shows how government cuts in the UK target disabled people.
Article: 14.04.14

Next Steps on a Cumulative Impact Assessment (CIA) Simon Duffy explores the possibility of developing an even more rigorous assessment of how cuts have targeted…
Graphic: 06.05.17 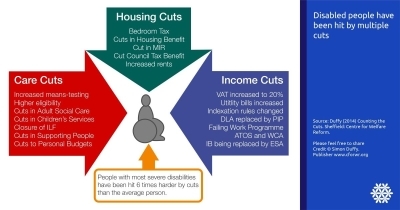 Disabled People Hit by Multiple Cuts Part of the report Counting the Cuts in 2014, which calculated the cumulative impact of the UK's austerity policies on…