Campaigning for a Fair Society

This talk was given by Simon Duffy at the Launch of the Campaign for a Fair Society's 2012 Manifesto at the House of Lords on 12 March 2012.

Thanks to Baroness Hollins and to the Campaign’s leaders and organisers in Scotland and England for organising this event. Before I begin I’d also like to draw your attention to two key people:

Norma Curran Chair of the Campaign in Scotland

The campaign needs your support - so please talk to them if you think you can help in any way.

I am very honoured to be asked to speak by the Campaign on its behalf - I hope I can do the opportunity justice.

The Campaign for a Fair Society is about much more than cuts; but I do want to start with the cuts. For many people do not understand how deep and how unfair these cuts are. If we examine the government’s expenditure plans as originally set out in the October Spending Review of 2010, and then updated in 2011 - to include further cuts in benefits. We find that the government is increasing spending in some areas and reducing spending in other areas.

By 2015 the two biggest cuts in annual expenditure will be:

They say the cuts will affect everyone, but the facts say something very different.

They say the cuts are necessary, but targeting these minority groups is not necessary.

In fact this can be seen most dramatically if we look at these cuts in percentage terms. Here we see that the cuts to social care are part of a 29.3% cut in central funding for local government.

Moreover several central government departments are seeing significant increases in expenditure - most dramatically of all is the increase in expenditure by the Cabinet Office, Treasury, and its new Quangos - a figure so large - 254% - that it could not be fitted on the graph. 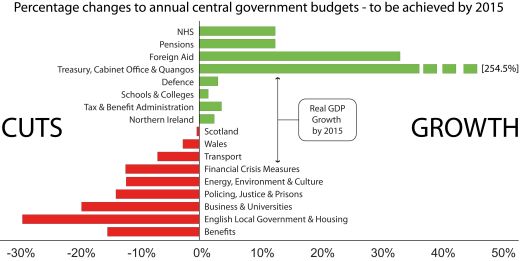 Out of all these figures the Campaign often focus on the group who are likely to be most severely affected - those receiving social care and benefits. This is why we sometimes focus on the fact that 2% of the population - the people with the greatest needs - will bear the burden of 25% of all the cuts. 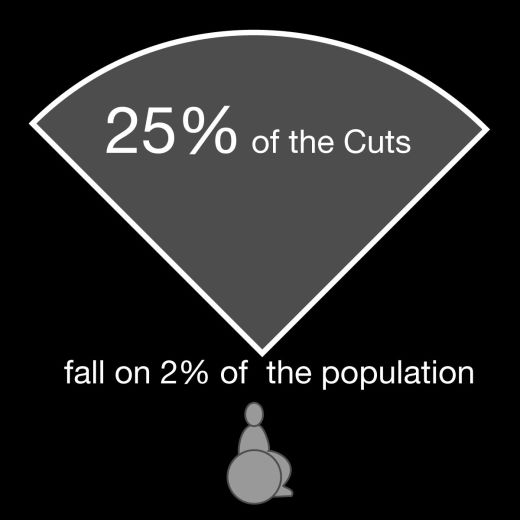 So the the cuts are unfair - this is obvious:

The natural question to ask is ‘why do the cuts target people living in poverty and particularly disabled people?’ In the end the answer has nothing to do with fairness, economics or even logic. The rather sad and obvious answer is that the cuts target disabled people because these are amongst the very few cuts that are politically feasible. So, for the Campaign, the next question becomes - how is it possible that disabled people have been targeted in this way.

A good example of the public confusion that has helped to undermine the rights of disabled people is the misrepresentation of data about benefit fraud. Government estimates benefit fraud at about £1billion. This sounds a lot of money, but it is only about 0.5% of the DWP budget for pensions and benefits.

Moreover it is dwarfed by three other figures: 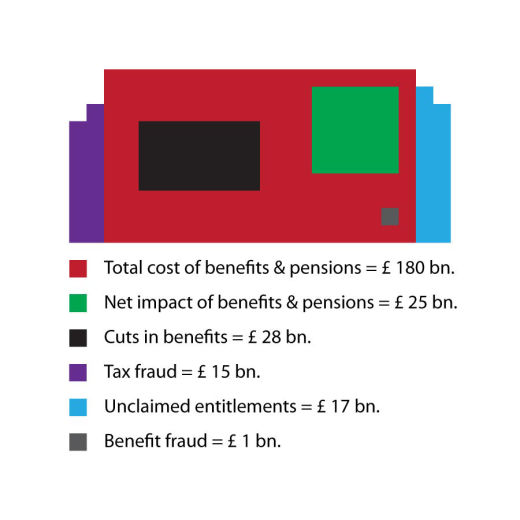 The roots of the word ‘campaign’ connects back in time to the fields outside the walls of ancient Rome - the Campus Martius - where the people met to discuss ideas and to challenge the political elites within the Roman political system. So - in the same way - our campaign must be engage with the many millions of people who want a fairer society and who - when roused - will cause our political leaders - of all parties - to think again.

One of my favourite Chinese aphorisms is ‘lure the tiger from the mountains’. What this means is that positive change is difficult if you are in the wrong terrain. Of course, it is necessary to fight the Welfare Reform Bill and to combat every negative change. We may even win some of these fights. But in the end we will let our actions be defined by someone else’s agenda.

If we want to live in a fair society we cannot just react to the latest ideas of government - we must also start to define what it is we want instead.

The Campaign’s 2012 Manifesto is our first attempt to start to define our picture of what a fairer society would be like and - in particular - what a fairer welfare system would look like.

Please read the Manifesto - but I am going to briefly outline the key elements of our thinking:

1. Human rights - citizens should have rights and should be able to use the legal system to protect them. It is rights - not services or benefits - that are our best starting point.

2. Clear entitlements - citizens should be entitled to enough help that they can then make their own contribution. People need a secure foundation so they confidently play a full part in the community.

3. Early support - citizens shouldn’t be forced into crisis, poverty or into greater need in order to get the help they need. People and families need to get help early so they can develop and be as strong as possible.

4. Equal access - citizens should be able to play their part in every aspect of community life, not be trapped in institutional care. Money does not belong in services - but in the hands of disabled people.

6. Fair incomes - citizens should be free from poverty, dependence and the gnawing insecurities that damage the human spirit. Everyone should be guaranteed enough to live a decent life, with all the incentives to earn, save and strengthen our families.

7. Fair taxes - citizens should be able to contribute to a system that is equitable, proportionate and doesn’t target specific groups. Disabled people should not be targeted by poverty traps and the unfair local authority charging system which taxes disability.

8. Financial reform - citizens should be able to rely on government not to undermine their collective and individual security by the mismanagement of the banking system and an unsustainable dependence on financial institutions.

At the heart of our thinking is this statement of fundamental values:

Everyone is equal, no matter their age, differences or disabilities. A fair society sees each of its members as a full citizen - a unique person with a life of their own. A fair society is organised to support everyone to live a full life, with meaning and respect. The idea of citizenship for all is vital.

It is only if we take citizenship seriously that we can reconcile two vital aspects of our humanity:

If we do not find a way, as a society, of reconciling these two aspects of our humanity we could see ourselves slipping even further away from a fair society and into something even more dangerous and frightening.

I want to end by touching on something that I know may seem too radical and uncomfortable - the rise of eugenics. The following is a quote from Suzanne Evans' book, Forgotten Crimes, the Holocaust and People with Disabilities:

…a [Nazi] Ministry of Justice Commission on the Reform of the Criminal Code drafted a similar law sanctioning "mercy killing" of people suffering from incurable diseases. The law read, in part:
"Clause 1 Whoever is suffering from an incurable or terminal illness which is a major burden to him or others, can request mercy killing by a doctor, provided it is his express wish and has the approval of a specially empowered doctor.
"Clause 2 The life of a person who because of incurable mental illness requires permanent institutionalisation and is not able to sustain an independent existence, may be prematurely terminated by medical procedures in a painless and covert manner."

Only the other week an article in the BMJ - reported by the Daily Mail - argued that doctors should have the right to kill disabled children after birth. Already 92% of unborn children with Down’s syndrome are aborted. Eugenics is here and it is not diminishing. The growing levels of hate crime against disabled people is another sign.

These are danger signs - they tells us that disabled people are not seen as equal citizens, not valued and their contribution is not valued.

History teaches us that we cannot be complacent about the rights and lives of disabled people.

History also teaches us that we can build a fair society, if we are brave enough to build it together.

A Fair Society? Produced for the Campaign for a Fair Society, this report shows how government cuts in the UK target disabled people.
Paper: 14.11.12