Things that gain from disorder

I could have followed the paradoxical advice of the author Nassim Nicholas Taleb and not read his new book Antifragile (for old books are much more reliable) but I’m very happy that I didn’t. Antifragile builds on his earlier book Black Swan and explores the ethical and practical consequences of living in a world of uncertainty. 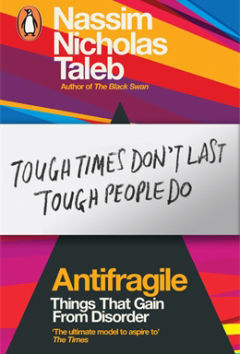 At the heart of the book is the idea that “Everything gains or loses from volatility. Fragility is what loses from volatility or uncertainty.” Taleb then argues that much of the modern world is fragile, and unnecessarily so. We have been building systems that will fall apart, and will cause great harm to the innocent when they do. He advocates building a world which is not just more resilient, but which is also antifragile - where we benefit from change and harness destruction.

Taleb‘s primary target is the financial system. He describes how the experts played a critical role in building an increasingly fragile financial system, but then protected themselves from this fragility. So, bankers are rewarded by the tax payer with bonuses, even after they have destroyed the banking system. Older societies punished banking failures by decapitation; we can’t even cap their bonuses.

Taleb argues we should limit fragility by cutting the big down to size and by ensuring that those who seek big wins must also risk big loses. Here is just one of his proposals:

My suggestion to deter "too big to fail" and to prevent employers taking advantage of the public is as follows. A company that is classified as potentially bailable out should it fail should not be able to pay anyone more than a corresponding civil servant. Otherwise people should be free to pay each other what they want since it does not affect the tax payer. Such limitation would force companies to stay small enough that they would not be considered for a bailout in the event of their failure.

Taleb doesn’t concern himself with my interest - the design of the welfare state - but what he says is relevant and illuminating. For instance, he argues that good systems promote antifragility by insuring people against big risks, whilst giving them lots of options to improve things. This is a very good explanation of why personal budgets work. It also explains why the idea of a guaranteed basic income, combined with good incentives, will be the key to redesigning income security.

The flip side of his analysis also explains why so many state-run or state commissioned services are so poor. They are fragile; they are too big to be seen to fail (but fail they do) whilst they steal people’s options. For example, the residential care system not only steals someone from their own home, but it also steal the options of everyday life that enable a decent life: where we live, who we live with, how we live. Control is seized by managers, commissioners, regulators and ultimately by government, over matters they are incompetent to manage. The cost is paid by the person, the benefits go to those managing the system.

This analysis also explains the irrelevance of the main Left-Right debate on the welfare state: Should it be run by Whitehall or by private corporations? Taleb rightly argues that the main problem here is not private versus public, but big versus small. Big corporations tempt policy-makers with their polish and their ‘profit motive’ but in the end they behave just like bureaucracies. The system is run by people with no real commitment to those they serve and no accountability to them; managers simply work to protect their jobs, their salaries, redundancy packages and pensions.

This is partly why Taleb proposes we should end big government and shift power to the local. This is not because local government will always get things right. Local government leaders are closer to reality and have fewer places to hide. Mistakes in big centralised system spread until there is a major meltdown; a mistake in local government just gives their neighbour the chance to avoid making the same mistake. Local government is antifragile - we benefit from mistakes.

This left me musing on what Taleb would think of the determination by UK MPs to increase their salaries.

He argues that in poorer countries the bribe comes first, and is then followed by the corruption; but in the Western states the process has been reversed: the politician is corrupted first and is rewarded afterwards. This happens in at least two ways. Politicians insure themselves from the risk of losing their income by pandering to the electorate to stay in power - rather than doing what’s right. Or they pander to the rich and powerful in order to get a seat on the board when they leave power. Taleb notes that the rich are much more prone to this kind of corruption than the poor because they feel they’ve got more to lose. All of this means that paying MPs more will invite a higher level of political corruption, because it will gives MPs more to lose.

We could reduce this risk by creating a basic income for all citizens and then not paying politicians anything. Or alternatively we could demand that politicians don’t set their own salary. We, the people should set their salaries, by plebiscite.

The publisher is Penguin Group.

Basic Income Security This paper by John Dalrymple and Simon Duffy sets out a proposal for the reform of the income security system in an…
Review: 07.01.14

A Fair Income Simon Duffy explains how the tax-benefit system can be reformed to promote citizenship and families.
Inspiration: 01.08.10