A perennial battle in politics is fought between those who seek to protect the interests of a powerful elite in the name of the security of all; and those who are accused of pandering to the weak and lazy when all they want to do is make sure everyone can count on a common safety net.

But if we take our security seriously, it will be clear that it cannot be just the concerns of the rich and powerful that shape our country’s policies? Everyone’s security, and every damaging threat to that security, has to be addressed by our country’s political agenda.

Once we refuse to allow the notion of ‘security’ to be hijacked by the plutocratic establishment, we can start to bring back a proper sense of proportionality to public assessment of how the nation’s resources ought to be prioritised in tackling the threats that hang over the nation’s citizens.

A terrorist attack is understandably a headline story. And every time an incident claims another innocent victim, some in government will declare that no expenses will be spared in responding to it, no hesitation will get in the way of changes to the law, and no one needing help and protection will be denied it.

But whatever is needed to minimise the likelihood of terrorist-related harm to us, we must not neglect to consider the many other threats and damages the people of this country have to endure. People have to live in fear and despair, in pain and insecurity, because others more powerful than they decide to make them work for so little money that they cannot cope. People are deprived of care to deal with their poor health or disability, of sufficient energy to heat their home, or of a home altogether. If the actions of terrorists are random and destructive, the horrors engendered by people who think only of their own objectives are in fact far more widespread and insidious. Extremism in greed, even more so than extremism in creed, wrecks lives.

It is time for politics to be focussed on making us safe from all key threats (be these economic chaos, hunger and malnourishment, homelessness, ill health, military and paramilitary attacks, theft and violence, abuse of people who cannot defend themselves, riots, environmental degradation, destructive climate fluctuations). The job of politicians is to prioritise according to real needs and not media headlines concocted by corporate barons with their own agenda.

Foregrounding the actual threats posed to our security should also lead to greater transparency. At present we get updates on terrorist attacks that might have been foiled, but nothing on the number of people driven to suicide or have died from physical deterioration after they were stripped of benefits as well as paid employment. There should be accurate and accessible information on what the government is doing with our collective resources in tackling the harm that might hit us or our fellow citizens.

Given the vital need for resources to defend our security, the biggest factor that hinders our country from having the necessary level of funding – namely, industrial scale tax avoidance and evasion by corporations and the superrich – must have the public spotlight put on it to expose what are in essence unpatriotic activities that put the people of this country at risk.

Finally, in contrast to the usual assumption that anything to do with our national security must be conducted at the highest level of secrecy, there should be open, deliberative opportunities across the country to facilitate citizens of all ages and backgrounds to join in mediated forums to reflect on what funds are raised for tackling various threats to our country’s wellbeing, how they are used, and what changes should be made. The informed views to emerge from such forums should then be systematically fed into the policy thinking of politicians inside and outside government.

Let us move away from the false debate between supposedly tough-minded champions of military-focussed security and allegedly soft-centred advocates for socio-economic security. Our national security by definition encompasses the need to protect the lives and wellbeing of all citizens of our nation – not just the rich and powerful. The only viable future is where this genuine national security is the guiding principle of our democracy.

Henry Tam is a writer and educator, whose books include Communitarianism: a new agenda for politics & citizenship; and novels such as Whitehall through the Looking Glass, and Kuan's Wonderland. A new edition of his history of the progressive struggle, Against Power Inequalities, has just been published as an e-book and in paperback. For more information, go to Henry Tam: words & politics. 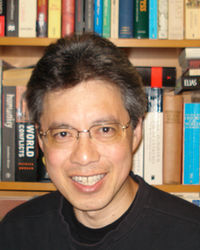 Let's Scrap the DWP Simon Duffy and John Dalrymple make the case for Basic Income Security - a system to integrate and reform the current tax…
Article: 17.03.14

Assessing the Assessors Independent research by disabled people on the assessment process which many are forced to undergo - the Work…
Article: 19.09.14

Travels in Human-Based Development Pete Richmond sets out what we can learn from Manavodaya a development organisation based in India and the UK, in…
Article: 02.10.15

Equality and the Governance of Welfare Dr Henry Tam believes that the governance of welfare has to be conducted transparently and inclusively. Here he sets…