In an April posting on the website* I co-host with John O’Brien, I reviewed two excellent books by Nick Wilding and Philip Monaghan respectively which seek to understand how locally resilient communities can become the basis for sustainable societies. A new book from Michael Lewis and Pat Conaty The Resilience Imperative: Cooperative Transitions to a Steady-State Economy builds on both to offer a compelling account of the Social, Ecological and Economic Strategies we require for ‘life after growth’ i.e. to make a SEE Change in our economy and society. 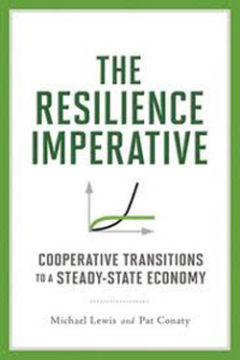 The authors begin with a quote from Arundhati Roy: ‘Another world is possible, she is on her way. On a quiet day I can hear her breathing.’ Like Tim Jackson and Rob Hopkins, they are persuasive on why ‘business as usual’ is already, and will be increasingly, disastrous for us and our planet.

In the spirit of Roy, they then offer a detailed theoretical and practical analysis of the alternative agenda required to achieve the ‘great transition’ to more local and resilient economies, based on careful attention to both current and historical innovations (the latter mostly swept away by the ascent of modern ‘free market’ capitalism) which have the potential to be scaled up and linked together to achieve radical change.

Fundamental here is an appreciation of the need to strengthen the capacity of our ecosystems to adapt to emerging challenges through attention to seven principles of resilience which include: promoting diversity; creating arrangements which have some mutual independence (so they don’t all fail together!); investing in social capital so we can better work together; and encouraging innovation from which we can learn.

In turn this leads to four broad strategies for the SEE Change:

Turning these ideas into concrete proposals The Resilience Imperative offers a necessarily radical agenda for social and economic innovation, embracing for example:

There is work enough for us all in pursuing this agenda. The Resilience Imperative provides a detailed script. It’s time we all heard the new world breathing.

The publisher is New Society Publishers.

The Transition Companion Rob Hopkins explores how local communities can become more resilient and, in particular, less damaging to the global…
Paper: 11.04.13

Building Community for the Great Transition In this paper David Towell explores how we can begin to build communities which are sustainable and inclusive.