How Christians Can Help Rebuild Our Broken World

It's an uncertain business reviewing a collection of essays in which one of your own is included. However, to jump right in, Virginia Moffatt has done a brilliant job of pulling together a diverse range of authors around the theme of the common good - how we've lost sight of it and what we can do to reclaim it.

I won't discourage you from buying the book by rehearsing all its arguments and evidence. Primarily I think the book is educational and provocative; it provides balanced and well-evidenced information on a range of economic, social, political and ecological topics. If you are a Christian who wants a critical review of current national and international policy you will find the book a helpful primer and basis for debate. Even if you are not a Christian you will find it useful, not just for political purposes, but also to see how one human community continues to find moral value in ancient Biblical traditions and in theological beliefs that many in the West find bewildering. So, for such an audience, the book has, perhaps, an additional anthropological value: testimony of the efforts of the Church to still be of value, in a world that increasingly rejects it.

I think there is a second purpose to this book; it offers, in a gentle tone, but with a stern critique, a significant corrective to a recent crop of Christian thinkers who seem to have accepted the rationales for ‘reform’ and ‘austerity’ offered up by the current extreme Right-wing UK Government. Further, it should be troubling to all Christians that Tony Blair, David Cameron and Theresa May have all publicly proclaimed their Christianity, while introducing policies that have increased inequality, stigma and exclusion. Meanwhile, Jeremy Corbyn, someone who gives me real hope, keeps his own religious views private. As Christ reminded his followers, just using his name is no guarantee that He would recognise them as true followers in His way. 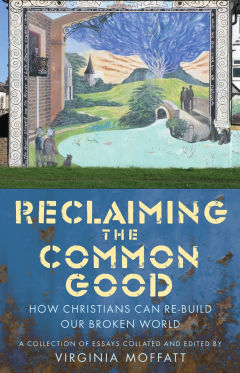 Austerity has been a particularly vicious accelerant to the co-option of the Church by those whose real work has been what the United Nations has rightly called a "human catastrophe". When political leaders dress harmful policy in religious clothing then Church leaders have a particularly important role to question, challenge and avoid collusion. In the UK, the Church has only partially lived up to this challenge.

The Right's partial success in drawing the Church into complicity is because it can exploit some important half-truths. It is right to recognise that the state has its proper limits and that it cannot, alone, provide for the common good. But it is wrong, dangerously wrong, to imply that, in its place, the market will provide what the state cannot. Markets, embedded and constrained within real human communities, can have a positive value - but on their own they do nothing to serve justice. Worse, they can quickly poison the common good at every level: personal, familial, cultural, political and ecological. Market thinking is self-interested thinking and, as such, it is only helpful when it is severely disciplined by the requirements of the common good. If the market is your master then everything will go to ruin; this is what the UK's leaders are daily demonstrating.

It is also right to suggest that people need more than the state. We need mother nature, democracy, community life and the family. The Church may hope that it could play a bigger role in a world where the state has become somewhat smaller; but this hope can quickly turn to dangerous delusion. The erosion of the state in the UK has not led to a growth in civil society, community or the world of faith. Instead private corporations have consumed the welfare state and now dictate public policy, funding think tanks and corrupting politicians. Austerity has not led politicians to return power to citizens or to their communities; instead they now enjoy the exercise of even more lucrative forms of patronage - stepping down from political power only to take up a seat on the board and a seat in the House of Lords.

There is a reason why Aristotle, father of the idea of the common good, spent so much time considering which constitutional forms might reduce corruption and the abuse of power. There is a reason that Athenian democrats made sure all citizens could make decisions and that people only served political office for short periods. It is always corruption and the temptations of greed, fame and power that draw leaders away from seeking the common good.

The idea of the common good is at its simplest the idea that we should work together to ensure the good of all, not allow the good of the one individual, or one group, to dominate. We should demonstrate solidarity with one another.

However we should also acknowledge the complex and diverse nature of the common good. We must combine solidarity with subsidiarity; the idea of subsidiarity is that things should be organised so that we can each find a path that is meaningful for us and that power should not be drawn away from citizens, families or communities. Instead there needs to be a balanced constitution, where power is distributed at the right levels to ensure that the common good is connected to the unique value of every individual.   We also need to recognise that the boundaries between us - nation from nation, countryman from refugee, non-human animal from human animal, are all boundaries that must serve the common good. America is not first, Britain is not first; I am not first, you are not second, she is not third. We are all equal and the common good means that we all must thrive. And all means all.

So what might we do to reverse these trends towards destructive individualism, elitism and nationalism? We can each only do so much alone, and each of us will be called to focus on different issues. But I think a good case can be made that we must not only seek the common good - seek the New Jerusalem - we must actually start to build it. This means that, above all, we must act like citizens. This does not just mean taking seriously our primary responsibility to act like a citizen; it also means treating each other as fellow citizens and having higher expectations of each other's capacity to make a difference and to rise to the challenges ahead.

Citizenship means expecting more of each other. So, perhaps the second responsibility of citizenship is to ensure that we treat each other as citizens and share in our responsibility to make the world a better place - for the common good.

Reclaiming the Common Good is available to buy via the publisher here.

The publisher is Darton Longman & Todd.