Melissa Lane’s book is an excellent review of many of the key ideas which underpin our political and social systems. It is also a reminder that we should be hesitant about assuming there has been very much progress in human affairs. 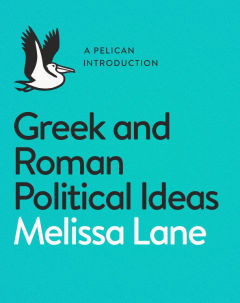 It cannot be an accident that just as Athens was giving birth to theatre, philosophy, science and some of the most breath-taking sculpture and architecture, it was also showing that human beings could live together as equal citizens, make decisions, judge cases and defend themselves from the extreme threats of Persia and then Sparta. Flawed and limited as Athenian democracy clearly was, it also unleashed human potential in ways which shame modern democracies.

In fact it is hard to think of Western societies as democratic in any literal sense. After the Roman Emperors destroyed the Roman Republic they masked their overwhelming power behind Republican political structures. Today modern democracies are actually what Aristotle would have called an oligarchy - a political system run by a narrow elite, and largely organised to serve the interests of that elite. Our society wears the mask of democracy, but the real political influence of ordinary citizens is a tiny fraction of that experienced by citizens in ancient Athens.

Building a real democracy in modern Britain feels like an impossible challenge. Although we assume a limited kind of administrative equality exists between citizens, we have been largely persuaded of our own incompetence to rule, to judge or to administer our own society. Most of the officials of Athens were, subject to some important checks and balances, appointed by ballot and served as a matter of public duty. Today we assume that only a special group of well paid politicians and their officials can take on these roles.

Like later Greeks and Romans, we are now also very aware that our society is just one part of a global community, and our powerlessness at home mirrors our powerlessness abroad. This makes the Stoic concept of cosmopolitanism seem much more relevant - today we are citizens of everywhere and nowhere. We may lack authority in our own homeland; but we do see ourselves increasingly as members of a global community - even if that community seems to be subject to natural and political forces that seem overwhelming. This is certainly some kind of achievement.

But, as Melissa Lane’s book suggests, the modern global citizen might easily be taking comfort from the fact that, in a world where real citizenship is impossible, claiming global citizenship has no costs and no consequences. It is an easy - and largely empty - victory.

In terms of historical process Melissa Lane’s book reminds us that democracies are forged from conflict and come about when those who are poorest organise themselves to be powerful. The initial democratic constitution, developed by Solon, was precisely a means to find a balance between the interests of the rich and the poor:

How did Solon achieve civic peace? By focusing on economic relations. Like certain lawgivers and rulers in other ancient societies, including the Near Eastern societies of Egypt and Phoenicia with which the Greeks traded goods, stories and ideas, he abolished the right of the poor to pledge their bodies as security for debt and so, upon defaulting, to be seized or sold as slaves by their creditors. This was clearly a restriction on the contractual liberty of the poor: they were not to be allowed to incur such debts with such security, even should their children starve for lack of cash. But it was a restriction of their contractual liberty for the sake of protecting their political liberty: as Solon explained it, for the sake of justice. Wherever the poor are vulnerable to contracts that make them liable to be used or sold as slaves, they cannot be secure in their status as citizens at all.

Later democratic settlements in Athens tended to strengthen the socio-economic rights of the poorest. And it is worth remembering that, in a violent ancient world, Athenian democracy lasted nearly 300 years - much longer than any modern democracy in Western Europe has so far managed.

It is also important to remember the intimate connection between democratic structures and economic rights. The welfare state was created from within a democracy, and if democracy wanes then we can expect socio-economic rights to weaken also. Although the powerful may decide to continue to some paternalistic forms of state-charity - just as the Roman Emperors gave bread and circuses to the Roman masses.

The other central theme in this book is the important connection between virtue and citizenship. Modern politics is very focused on finding the right system - but as Socrates, Plato and Aristotle all saw - you can have a perfect system, but the wrong people. A good system (by definition) will of course have a positive impact on the development of good people. But this raises two important questions. First, we must understand what virtue is if we are to understand how to promote it. Second, we may wonder whether it is possible to arrive at a good system without the good people to make it happen.

Discussing virtue in politics is always risky. It is is noticeable that it is often a rhetorical technique by which the powerful can look down their noses at the less powerful; who are presumed to lack virtue. This is a clever sleight of hand - by pointing to someone who is weak and seeming to lack in virtue, we manage to not only ignore all those who are both weak and virtuous, but also to invent a figmentary correlation between vice and poverty. At the same time we ignore the obvious fly in the ointment - that this presumes a correlation between virtue and power - even when we have all of human history available to disabuse of this fallacy.

So, somehow, we must overcome this problem and find a way of discussing virtue or - what some of my friends call - the inner dimension of things. We must ask ourselves what kind of people we want to be - not just what power or rights we think we are entitled to.

The publisher is the Penguin Group.

Working on the Inside Kate Fulton offers insight into the inner dimension of change that is essential to working respectfully and with…
Review: 06.10.11

Keys to Citizenship A guide to getting good support for people with learning disabilities.
Paper: 09.04.10

Citizenship Theory A paper which explores the theoretical foundations of personalisation.