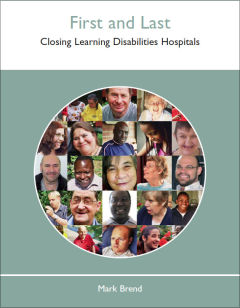 Mark Brend describes the history of the closure of the learning disabilities hospitals that were once used to segregate people with learning difficulties.

The book documents some of the progress we have made as the institutions were closed and as people returned to communities and were offered support and the possibility of control and dignity. In the past, as the book describes, people with learning difficulties would often face dreadful treatment from these dehumanising systems:

"In 1982 the Independent Television Network screened a documentary by Nigel Evans called Silent Minority. Among many disturbing scenes was one showing a young man tied to a post. The narrator reported that the man was restrained in this way for up to five hours a day. Another scene showed other people - bruised, half-dressed, sunburnt as a result of drug-induced skin sensitivity - wandering aimlessly in a fenced compound. Elsewhere, collections of people in large, shabby, sparsely furnished rooms, rocked aimlessly to a background chorus of hums, groans, and an unwatched television."

Sometimes staff in the hospitals would fight to help people move out or to achieve some kind of better life within the hospital walls. However, more often staff would become dispirited by the same sense of powerlessness that the institution created for its residents.

At the end of 1960s people began to challenge the need for these institutions and, over the next forty years the institutions were closed. This book tells the story of that change and shares the perspectives of many of the different people involved in helping move back to their communities.

Not everything was easy; not everything went well. At first many of the services offered in the community were as institutional as those people had left behind. It has taken some time for people to realise its not just the walls of the institution that need to come down, we also need:

In this short book Mark Brend has managed to capture the positive achievement of the hospital closure programme, while respecting its complexity and the very many positive efforts made by many different people over the last forty years. It is from the perspective of one organisation, Choice Support; but perhaps for that very reason it gets closer to the heart of what has really happened in people's lives and better describes the energy and spirit necessary to bring about this radical reform of the welfare system.

The publisher is Choice Press.

All Rights Reserved. No part of this publication may be reproduced, stored in a retrieval system or transmitted in any form or by any means, without permission from the publisher. 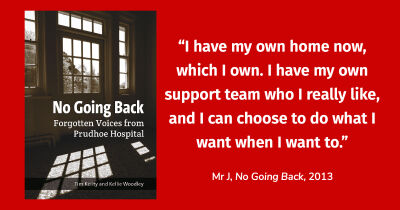 No Going Back Authors Tim Keilty and Kellie Woodley write about the forgotten voices from Prudhoe Hospital.
Article: 06.10.15

Using a Personal Health Budget Rob Moriarty describes the benefits of using a personal health budget for himself and the merits of the system.
Story: 29.07.15