Can You See What I See?

This article was first published on the author's blog, Being.

Sometimes, ‘the passage’ in a book is all that you have been waiting for; waiting to take the leap into life’s imponderables which potentially defines you while you live and after...

Sometimes, ‘the passage’ changes you forever: to be yourself, to explore more, to be truthful.

‘To be yourself – to think and act without fear but with freedom, vision and clarity of thought ‘

The world is governed by false values. People in all societies seem anxious to do what they think is the done thing, and are terrified of social disapproval. They set their hearts on getting on in the world, being thought highly of by their fellows, being powerful, acquiring money and possessions, knowing ‘important’ people. They admire the influential, the rich, the famous, the wellborn, the holders of rank and position. But none of these things have any serious relationship to merit; as often as not they are ill gotten, and nearly always they are partly dependent on chance. None of them will protect a person from serious illness or personal tragedy, let alone from death. And none of them can be taken out of this world. They are not an inherent part of the person himself but are merely external decorations, hung on him. They are the tinsel of life, glittering but worthless. The things that really matter in human beings are things that can matter more than life itself: loving and being loved, devotion to truth, integrity, courage, compassion, and other qualities along entirely different lines.

I know many of us appreciate the above passage, but after a temporary admiration we move on in our lives searching (sometimes out of our own volition or due to societal pressures) for trivial, unimportant things. It’s similar to the temporary suspension of disbelief while watching a play by Shakespeare that disappears when the lights are switched back on. But some people among us have stronger minds; they struggle, persist and constantly push themselves and achieve greatness through their deeds.

The late Dr. G. Venkataswamy (Founder of Aravind Eye Care in India) was one great person. Individuals like Dr. V have a sense of purpose and devote themselves fully and selflessly. Service is their mantra. I visited Aravind, India in 2011 and was completely taken back by the simple but determined approach the organisation had in its service delivery principle.

Dr. V’s vision for Aravind was profound but simple: ‘’To see all as one. To give sight for all.’’

Aravind was Dr. V’s post-retirement project (He started Aravind at the age of 58 in 1976) and what an eye-opening project it has been! There was no money, no business plan and no safety net when Dr. V started it, he only had a vision; and sometimes having a vision is important.

There is a sentence in the introduction to the book Infinite Vision - How Aravind Became the World’s Greatest Business Case for Compassion that would strike a chord with anyone who reads it. It goes like this:

Aravind is an unconventional model that came into being not despite but because of the deep-seated compassion at its core. This is a model that demonstrates the power of integrating innovation with empathy, business principles with service, and outer transformation with inner change.

Aravind performs roughly 50 percent of the entire NHS’s ophthalmic surgical volume, while spending less than 1 percent of the £1.6 billion expended annually by the United Kingdom for eye care delivery. In 2008-2009, the NHS performed 567,629 eye surgeries. Aravind performed 269,577 surgeries in the same period and in a comparative study of adverse events during surgery, Aravind’s rates were lower than the UK’s. The data provided by Aravind Eye Care came to public notice by its inclusion in C.K Prahalad’s book The Fortune at the Bottom of the Pyramid.

Of course, Aravind is unique in a land (India), which is one of the fastest growing economies in the world but compares unfavourably on health and nutrition indicators to many rich and poor countries. For example, Bangladesh has higher life expectancy and lower child mortality rates compared to India, although India’s GDP per head is twice as high as that of Bangladesh. In India, there is a shameful, unusual reliance on private health care as the country’s public health facilities are very limited, and quite often very badly run.[1] There are good practice examples in some states in India like Himachal Pradesh, Kerala and Tamilnadu, where public health initiatives and associated health outcomes are very good.

Our NHS, compared to the overall Indian health care model is exceptional; it is one of the most efficient, most egalatarian and most comprehensive health care system.[2] But that is becoming the thing of the past; there is deterioration of NHS values - over bureaucratisation and clinicians made to take a back seat in decision making (recent structural reforms through health and social care act 2012 creating clinical commissioning groups by placing powers in the hands of GPs is theoretically soothing, practically dissonant - just go ask the clinical directors in private where the power and control still are) has not helped. No major political party is willing to do the right thing although most of them know what is best for the people and for the long term sustainability of the NHS as a public institution.

The NHS will survive even if nothing is done. No funding gap is big enough to close, be it £30 billion or £60 billion by 2020. There is always the option of tax rises, integration etc but would it still be efficient and effective: of course, not.

We need a simple system.

This is where Aravind Eye Care comes into play. Because like the NHS, Aravind was founded on the principle (see ‘the passage’) that there are things that matter more than life itself. Aravind continues to shine, while the NHS is slowly fading.

This needs to stop.

We need a simple system.

There are many things that the NHS could learn from Aravind, for example:

(Of course, it is not a like for like comparison, and please note that Aravind is a provider of services, but there are some principles that are universal; and if the NHS wants to be sustainable it must - not only understand - but implement these principles, very soon. Will there be political will? There is the rub)

And most of the above principles apply not only to Aravind Eye Care, India but also to the Narayana Hrudayalaya, the multi-specialty hospital chain based in the state of Karnataka, India.[3,4]

The ‘legacy kick back’ (to use a term borrowed from Lord Nigel Crisp) structure of our public services (including NHS) is so complex that the no amount of tinkering around the edges will help the vehicle. There was an opportunity to reform health care few years back in the UK but the reform failed and the system was made more complicated. The failure to integrate health and social care effectively was one of its great mistakes, in my view.

Let us hope that future health policy in the UK will not be seen in isolation from social care, public health, housing and many other important factors that determine people’s wellbeing overall. Let us move away from the glittering but worthless approach we currently have and make the health care model simple, determined more locally, led by communities and clinicians, aligned with local government (which also needs to become more efficient and effective by eliminating unwanted bureaucracy if it is to survive in the 21st century) and devoid of major central government controls. 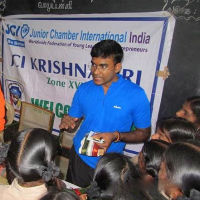 Vinny Went Cycling for Charity Vinesh Kumar joined his brother-in-law on a charity bike ride across India in aid of Sanjeevini Trust. On his trip he…
Article: 02.09.12

Vinny Went Cycling for Charity Vinesh Kumar tells the story of his 500 mile cycle ride across India, of the Avarind Eye Clinic and his thoughts and…
Review: 13.01.14