Joint Committee on Human Rights publishes its second report on the abuse of human rights of children and adults with disabilities and/or autism.

“Evidence to the inquiry into the detention of young people with learning disabilities and/or autism was so “stark” and consistent that the Committee says it has: “lost confidence that the system is doing what it says it is doing and the regulator's method of checking is not working. It has been left to the media, notably the BBC and Ian Birrell in the Mail on Sunday, to expose abuse. No-one thinks this is acceptable.”

In relation to the Care Quality Commission (CQC), the JCHR finds that:

“a regulator which gets it wrong is worse than no regulator at all”.

“Too often families of those with learning disabilities and/or autism are considered to be the problem when they ought to be the solution. Families must be recognised as human rights defenders.”

The JCHR also states that it has:

“no confidence that the Government’s target to reduce the numbers of people with learning disabilities and/or autism in mental health.”

“The biggest barrier to progress is a lack of political focus and accountability to drive change. A Number 10 unit with Cabinet level leadership is required to urgently drive forward reform.”

In summary the JCHR found:

The JCHR sets out a series of simple practical and legislative changes that are urgently needed now:

“This inquiry has shown with stark clarity the urgent change that is needed and we’ve set out simple proposals for exactly that. They must now be driven forward, urgently. It has been left to the media anddesperate, anguished parents to expose the brutal reality of our system of detention of people with learning disabilities or autism. We must not look away. The horrific reality is of whole lives needlessly blighted, and families in despair. What we saw does not fit our society’s image of itself as one which cares for the vulnerable and respects everyone’s human rights. It must not be allowed to continue.”

Simon Duffy, Director of the Centre for Welfare Reform commented:

“This report is the result of powerful advocacy by families, great journalism and politicians doing their job - with thoroughness and humanity. In these difficult of times it is heartening to see so many people look beyond the facade to address the deep and powerful forces that undermine basic human rights. There is nothing to celebrate here, but speaking the truth is the vital first step in challenging injustice and I would like to thank the Committee for their work and integrity.”

The Centre for Welfare Reform's submission to the inquiry is available at:

Further information is available at: 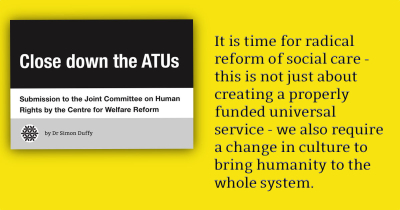 Close Down the ATUs The Centre for Welfare Reform made a submission in April 2019 to the Joint Committee on Human Rights calling for the…
Paper: 11.07.13