New reports reveals the connection between austerity and centralisation in England.

The report has been produced by Josh Shepherd and Dave Goswell and it tracks, where possible, public expenditure down to the level of a local authority area. It includes data on pensions, benefits, local authority services, the NHS and schools.

The combination of all these different forms of expenditure produces Local Spending; and this definition of Local Spending is an important innovation that offers a vital lens to examine the welfare state and policy objectives, such as Levelling Up.

The authors have also produced an online map which reveals detailed changes in each local area in England:

Some of the report’s main findings include:

The report casts severe doubt on the coherence of the Levelling Up agenda. Without proper data and genuine local accountability there is no prospect that grants, provided by central government, can fix the underlying imbalances of power.

“It has taken a lot of hard work to show the relationships between public expenditure, local areas, deprivation and austerity. It is clear that the current system is not designed to make things clear. But as we uncover these relationships it is also obvious that the claim that the government is committed to Levelling Up is false. Tackling the deep systemic injustices in the governance and economy of England must start with a redistribution of power. It is only when communities are able to make decisions for themselves and to hold the whole system to account that meaningful change can take place. Levelling Up is another centralised initiative; it will fail in the same way as all the similar phoney initiatives that have preceded it have failed. It is time for a radical revisioning of the UK state and a clear commitment to transparency, meaningful systems of redistribution and deeper democracy.” 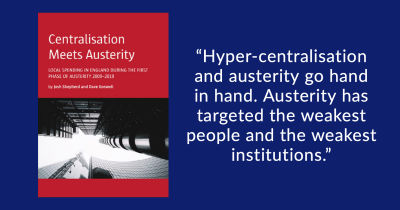 Centralisation Meets Austerity A detailed analysis of the impact of austerity on Local Spending in every local authority in England.