Letter to the Labour Party

Advocates of regional devolution and democratic reform have written an open letter to Gordon Brown.

Will the Labour Party listen to citizens and communities about our hopes for regional devolution? We've written to Gordon Brown's team to encourage them to engage with people outside the Westminster elite and to find out the hopes and aspirations for greater local control that are growing across England.

Citizen Network along with other campaign groups and regional parties have submitted an open letter to the Labour Commission on the Constitution urging public consultation over any future devolution settlement, should Labour win power. In particular it proposes a citizens' assembly on devolution in place of top down solutions imposed by Westminster.

The Labour Constitutional Commission was launched by Keir Starmer in December 2020 with the aim of coming up with a “new constitutional offer” and a “new deal for a better Britain.” However, little is known about what progress has been made or who has been consulted as part of its deliberations. It is the absence of such public consultation which has spurred Citizen Network and others to submit the letter to Gordon Brown.

“There is a real danger that a future Labour government will repeat the mistakes of past and present governments by imposing a top-down solution. At present devolution is a centrally directed process which robs it of any democratic credibility. It is largely dictated by economic imperatives with no regard to people’s sense of place and identity. That simply will not work.” says Dr Simon Duffy, Director of Citizen Network Research.

The letter urges the creation of a citizens' assembly as the chief means of bringing the public voice right into the heart of any devolution settlement. People are chosen through lot while ensuring a balance in terms of age, gender, occupation and income so that the citizens' assembly reflects a diverse and representative sample of the UK population.

“Such a balance must also take account of people’s political beliefs and values. Conservative voters no less than Labour and other parties must also be represented - otherwise it lacks democratic credibility.” adds Gavin Barker who leads on democratic and constitutional reform for Citizen Network.

Rather like a court jury, the citizens' assembly listens to evidence-based presentations from all sides as the basis for discussion and deliberation by assembly members, before arriving at a judgment and set of recommendations.

Citizen Network point out  that devolution should be about bringing power closer to the people. That principle must be embedded in the process not just the outcome, and the letter argues that the Labour Commission has the chance to kickstart a national conversation about what kind of democratic settlement people want.

You can read the full text of the letter here:

If you would like to add your name or group to the letter or if you have a press enquiry please email Gavin Barker. 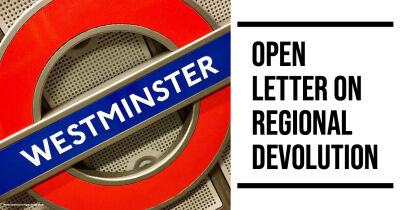