How to Fully Fund Social Care

On behalf of the Reclaim Social Care campaign Simon Duffy and Gordon Peters have developed a report outlining how and why we must fully fund social care.

The Centre for Welfare Reform has published a report outlining how to fully fund social care.

The report argues that it is perfectly achievable to develop a system in England where:

All that is required to make this possible is an extra £22 billion, bringing the total cost of Adult Social Care and Support in England to about £40 billion or 2% of GDP. Not only is this a human rights requirement, but it is also a feasible level of extra investment that will bring about major economic and social improvements in community life.

This report is published in association with a new and important campaign: Reclaim Social Care

Reclaim Social Care is a non-party political, coalition of individuals and organisations campaigning for all social support, independent living and care services to be:

Peter Beresford and Brian Fisher, members of the Reclaim Social Care campaign, have welcomed the report and said:

“It is the present damaging and wasteful system of social care that is unsustainable. The paper shows that, if this country begins to treat Social Care and Support as an investment, then we all benefit, both in economic and human terms: those who need its support, the staff with high quality and sustainable employment and the people of the UK as a whole.”

Simon Duffy one of the report's co-authors said:

“During the whole of my 30 year long career, politicians and policy-makers have constantly talked about solving the social care crisis; yet nothing has been achieved. There has been a dreadful lack of ambition and a failure to recognise that what is at stake is the right of every individual to lead a dignified and meaningful life - from birth until death. Too many people are being sidelined and ignored and the cost is a society that has become increasingly mean-spirited and neglectful. It is time to raise expectations and to begin to invest in our mutual support.

“The cost of fully funding adult social care is not high; in fact, if we end the current wholly inappropriate model of funding where social care is funded by Council Tax and Business Rates, we can move instead to a system funded by progressive taxation where the main contributors to the new system will be one of its main beneficiaries - will be the better-off. Under a universal system of fully funded social care everyone contributes and everyone benefits. It is far better that we provide collective insurance for future need than instead leaving people uncertain, confused and forced to take desperate measures to afford private care, or to impoverish themselves to make themselves eligible for publicly funded social care.”

Gordon Peters, the other co-author said:

“While the NHS is in undoubted need of a serious funding boost, we all rightly rest assured that it will be there to look after our medical needs, from cradle to grave. Yet while a majority of families in this country will have a member who needs, or is going to need, social care there is no right to that, and well over a million people have lost any such service since 2010, through funding cuts, tightening eligibility, and means-testing. Local authorities, many reduced in available spending by 40% over nine years, now compete with the NHS on who will pay for care, and families are caught in the middle of whether they are eligible or not for Continuing Care. An older person with the onset of dementia may be subject to having to sell their house to pay for long term care whilst if they have a different illness such as cancer they will be guaranteed free personal care.

“How long does the social care crisis have to go on? Universally acknowledged as needing to be resolved, politically, yet only ever postponed - and yet again by Sajid Javid in his Spending Review this month. Paul Johnson of the Institute of Fiscal Studies [Independent, 6 June, 2019] recently said: ‘One does not need to be a socialist to recognise that some risks are best shared, at least to some extent. That’s true of health, a fact we recognise to its fullest possible extent. It is also true of social care, a fact our current system barely recognises at all.’

“The argument for making social support for independent living and social care overall, free at point of use, universally accessible and equivalent to health in rights, funded from progressive taxation, has never been more urgent. CfWR and RSC have combined to produce this report, which is made available now for all policy makers and for wider public attention.”

The report is available to read and download at: 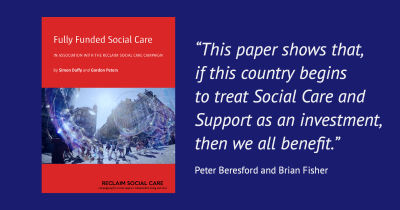