What is Citizen Directed Support?

I recently spent the day with leaders in Wales exploring the possible meaning of Citizen Directed Support, which they prefer to the term Self Directed Support. On the way home to Sheffield I reflected on the day and the importance of entitlements to citizenship.

Wales wants to create a communitarian approach to self-directed support - which it is calling Citizen Directed Support. It wants empowerment; but it doesn’t want individualism or consumerism. At a deep level this makes sense.

Many thinkers have observed that, unless we share a sense of joint commitment to collective systems of social security - benefits, education, health and social care etc. - then these systems will become unsustainable. If I fantasise that I can live in a world of my own, disconnected - not needed and not in need - then I will not play my part to build the real and shared world that we all need.

With no reference to community any call to social justice is hollow. But the question that then arises is whether individual entitlements are also part of a communitarian solution - or a threat to it. Some feel that any reference to rights and to the interests of the self is a threat to the community. But this must be wrong. My own instinct is that a credible form of communitarianism also requires robust entitlements and this is for several important reasons.

The limits of democratic accountability

First, we must not be naive about public services. Every system is a system of power and control, and every system serves its own interests. Public systems imply some kind of democratic accountability; however the degree to which this really shapes any public service is limited by major constraints:

Of course, by the same logic, accountability does improve where leadership is good, when there is more time to think, where systems are smaller and easier to understand, and where there is a better shared understanding of the issues. Making public services genuinely accountable to the community is not impossible - but it is highly dependent upon the scale and type of public services.

Putting public services on a human scale would be one important strategy for increasing democratic accountability and, free from Whitehall, this is certainly something Wales could explore. But it is not sufficient on its own to protect the interests of citizens and their communities.

The value of human rights

Second, many public services can have a profound impact on people’s lives. Unless individuals have the means to negotiate personal solutions for themselves then there is a grave danger that people will have to fit themselves into predefined public solutions rather than being able to act as free agents. This is a profoundly important point - but one that is often missed by those who forget the misery that can be created when other people take control over our lives.

The most important international framework for defending people from unfair and unreasonable control by others is the Declaration of Human Rights. The Convention on Rights of Persons with Disabilities sets out the key principles of that Declaration as follows:

All these principles are important, but I think it is worth focusing on two in particular. The right to freedom and the right to participation. We may think that a modern Western society doesn’t need to worry about such basic human rights. But our current social care system is actually in flagrant abuse of these rights. Many hundreds of thousands of people in the United Kingdom:

These are not marginal issues. Losing freedom over such basic questions threatens our dignity and diminishes the respect in which others hold us.

In addition, rather than supporting people to participate in society, public services are often subsidised in ways that encourage segregation. You are not really participating in society if your support comes in the form of:

Historically this is how governments have funded social care - spending people's money on things they wouldn't choose for themselves. This doesn’t support freedom and it doesn’t support participation. It abuses, rather than supports, our human rights.

The value of citizenship

Rights - and the specific entitlements they produce - are the building blocks of a decent society. They are not only compatible with a communitarian approach, they are required by a communitarian approach. While it is true that we need to see ourselves as part of shared community in order to support each other, we also rightly expect that any support we thereby receive really does supports our ability to lead our own life - with dignity and meaning.

How citizens spend their money

In the light of this abstract discussion it is worth looking at the data on how people actually use their individual budgets - their entitlements. It turns out that citizens do not shop for services. Citizens spend their budgets in their communities - building better lives for themselves and reinvesting back into community life.

There are several studies all of which tend to reinforce the same general lesson. The chart below describes how people with learning difficulties - who in the past had no option but to use day centres - chose to spend their own money when they had control over it. Mostly people spent money on personalised and practical support, plus using money to make better use of their community. 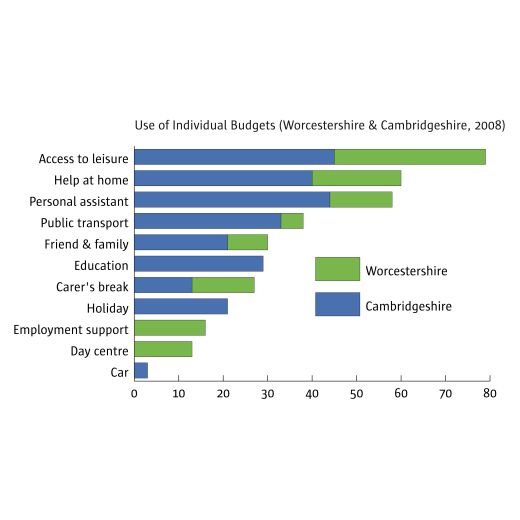 It is citizens - not commissioners - who should be trusted to spend money wisely. If we compare this pattern with prevalent trends in commissioning and procurement we notice that it is government, or the agents of government, who have moved money into bigger contracts, into bigger services, into private and multinational agencies - the SERCOs, the A4Es.

This is perhaps no surprise. Powerful and well paid civil servants and politicians will enjoy talking to powerful and well paid entrepreneurs and administrators. These are their peers. Nothing will seem more natural to them than to think that they know best how to spend our money; and of course spending money on people like themselves is the obvious next step. Meritocrats seek out other meritocrats.

Anyone who has visited a party political conference will notice that it is now these private companies that are subsidising many of the workshops, events, dinners and side-shows. This is a world completely divorced from ordinary people and ordinary life. The elite - on both the Left and the Right - have lost faith in the capacities of ordinary people.

Ordinary people are different. They are much more likely to focus on their own lives and their own communities. The solutions they dream up will be on a human scale - because this is what they know.

If leaders in Wales hope to see mutuals, cooperatives, community organisations and self-help and user-led organisations flourish then experience teaches us that they will need to shift funding, power and control down into the hand of citizens and smaller, local communities.

A few weeks ago I worked with folk in Anglesey on this same question - What is Citizen Directed Support? As part of our discussion we took some time to examine the demography of Anglesey on a ward basis. It makes interesting viewing:

When I look at this analysis I can certainly see some ‘needs’. But the needs are dwarfed by the capacities available to this community:

Perhaps this is the key to understanding what Citizen Directed Support might mean in Wales. If local people have real and meaningful entitlements, which they can use flexibly in their own communities, then there is 99 chances in a hundred that they will spend this money well - back in their own communities. There is only 1 chance in 100 that they will repeat the errors of public services and use it to fund multinational corporations to meet their needs.

Wales has a lot going for it. It has more democracy than England and a tradition of mutual support. It operates on a smaller and more human scale. There is a real dialogue between the people and their politicians at the Assembly and in local government. The decision to reform social care by deploying the concept of Citizen Directed Support is encouraging: citizens have duties and rights; citizens create community solutions.

Yet there remains a danger of falling back on the paternalistic and meritocratic tradition which has done so much harm to the cause of social justice in the United Kingdom. If people think that the state knows best, that it is the ‘clever people’ at the centre who need to be in control, then Wales will simply replicate the errors of Whitehall. Individualism and statism are both hostile to community and citizenship. The size of the state is not a good proxy for the health of the community.

I don’t think this will happen. If I am ever invited back again I really hope to find a nation that has had the courage to begin to define the basic rights and entitlements required by any decent society - including our right to receive enough help so that we can be a full and active citizen.

Is Personalisation Dead? Simon Duffy explores some of the problems involved in implementing personalisation and the fundamental question of…
Article: 20.07.12

Personalisation or Entitlements This article explores the challenge of making personalisation effective at supporting people's human rights and…
Article: 02.07.12