This Changes Everything: Capitalism vs The Climate

Recently I saw the film Erin Brockovitch replayed on late night TV. It's a great film in which Julia Roberts won an Oscar for her portrayal of Erin. You'll probably remember the powerful story, all the more so because it is true.

The Hinckley plant of the Pacific Gas and Electrical Company in California used a dangerous chemical (hexavalent chromium) in combating corrosion in the cooling system of a compressor station which formed part of a natural gas pipeline. Despite an 'independent' regulator, the wastewater was illegally discharged into unlined ponds at the site, which in turn percolated into the groundwater affecting the working class community living close to the plant. Erin, a legal clerk with no formal education in law (and now environmental activist), discovers that there is a high incidence of devastating illness (cancer, miscarriages, birth defects) among these people and that the Company is trying to cover up the pollution by buying up their property. She is instrumental in building a legal case against the Company which was settled in 1996 in favour of the plaintiffs to the tune of $333 million, the largest settlement ever paid in a direct action law suit in the United States (although almost paling into insignificance compared with the sums BP is still paying to compensate for the huge damage caused by the 2010 Deepwater Horizon oil spill in the Gulf of Mexico).

This is a story of corporate greed and corruption, profit before people and lax regulation, with terrible consequences - in this case challenged through a community coming together and being able to use the law, too late of course for many of the victims.

Naomi Klein is an outstanding investigative journalist who chooses the biggest issues and studies them in depth. There is no bigger issue than the ways in which collectively we are destroying the natural world on which humanity depends for its future, especially through our failure to tackle global warming. What happened in Hinckley is a microcosm of what is now a global challenge affecting us all. This Changes Everything is a 500 page blockbuster, telling this larger story in the style of the best 'who done its', with the added dimension of what can - and must - we do about it. It's a 'must read' for all of us concerned to create a better future in which we live in harmony with each other and the natural world. As its sub-title implies, we cannot win this struggle unless we achieve radical change in the prevailing economic model embodied in globalisation, deregulation and corporate domination, in short, in contemporary Capitalism. There is no time to lose! 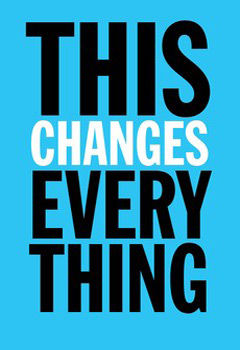 This book started from Naomi's investigation of the BP oil spill. Shocked by what she saw there, she widened her canvass and, five years later, this is the product. Along the way she discovered that the lack of agreement on international action to turn round the growth in emissions means that the 2 degrees Celsius target for limiting global warming is almost unattainable and there is a clear and present danger that we might reach 4 or even 6 degrees this Century with catastrophic consequences, unless we commit now to something much more radical, nothing less than a 'Marshall plan' for the Earth.

Why this failure? Essentially, as she puts this, the action we require conflicts with the deeply entrenched ideological pillars of the neo-liberal age - 'privatisation of the public sphere, deregulation of the corporate sector and lowering of taxes, paid for with cuts to public spending'.

She shows in detail how 'free-trade' (e.g. as expressed through World Trade Organisation rules) is being allowed to trump 'green' policies which require, for example, giving preference to local production; she shows how various kinds of 'magical thinking', for example, relating to carbon trading schemes and Dr. Strangelove style geo-engineering are being used to put off the need for regulation; and she shows how outright deception (like fossil fuel companies funding an alternative climate 'science') is seeking to confuse the public. Big money is also perverting the democratic process.

We see all this in the U.K. Fracking provides a current example. Our government is proposing a 'dash for gas', using methods with well-documented risks (e.g. to the water supply) while reducing incentives for investment in renewables. We can wonder who will profit from this set of priorities? There has been strong public resistance (e.g. in the village of Balcombe) to this assault on the countryside, so the same government is seeking to take away local control over planning, while lobbying within the European Union to scrap relevant safety laws. And just to add insult to injury, the Tory peer, Lord Howell (father-in-law of the Chancellor leading the dash to gas) helpfully offered the suggestion that we should concentrate fracking in what he imagines to be the 'desolate' and 'uninhabited' North East of England, rather than, of course, the 'beautiful natural areas' in the Tory South. (This is just one stark example of the rich elite being comfortable about damaging distant people and places while believing they can protect themselves from the consequences of their policies. They are wrong: there is no hiding-place from climate change although undoubtedly poor people and places are being asked to pay the biggest price.)

So what is to be done? Naomi Klein identifies a cluster of strategies which already are taking us in the right direction, if not yet to scale and certainly not everywhere. We can resist. Local communities, not least indigenous communities (sometimes using legal rights to land established with the original colonialists) can say 'no', for example to the Keystone XL pipeline proposed as one export route from the Alberta tar sands. We can campaign for disinvestment in fossil fuels and reinvestment in alternative economic strategies (renewable energy, public transport, sustainable farming, eco-system renewal etc.) like those developed in more detail by the New Economics Foundation. We can press for 'polluter pays' policies to raise funds for alternatives and accept international frameworks which recognise that the first countries to industrialise are not only economically richer than others but have a duty to pay most towards the necessary transition towards sustainability - now requiring 'de-growth' in the developed countries to leave some space for growth in the others. We can seek to curb the power of huge corporations, not least by re-empowering local communities (as we see, for example, in Germany where success in moving towards renewable energy has been greatly helped by municipalities taking back control of the power grids).

The meaning of This Changes Everything is that in order to successfully meet the challenge of protecting ourselves and our planet, we have to bring together efforts to strengthen democracy, including local democracy; tackle growing inequality; end the fetish of economic growth; and reinvent our relationship with nature.
As Pope Francisco's recent encyclical on climate change Laudato Si expresses this, we need to find a moral solution to this challenge, one that discards the belief that we can control nature and seeks to understand instead our place in nature and recognises that our own well-being is linked to that of others.

Interconnected challenges on this scale require an interconnected - and international - social movement in which all of us play our part. We are all Erin Brockovitch.

The publisher is Allen Lane.

This Changes Everything: Capitalism vs the Climate © Naomi Klein 2014.

Review: This Changes Everything: Capitalism vs the Climate © David Towell 2015.

A Manifesto for Planet and Progeny The world is haunted by the spectre of an 'economic man' and his form of capitalism, seen as the be all and end all of…
Review: 16.06.15