This latest work from Charles Leadbeater is a genuinely hopeful book for a troubled world. I would go so far as to commend this as a ‘re-engineering bible’ for the global transition movement which seeks to find ways in which we can better live in harmony with each other and within the ecological limits of our planet. Filled with examples of frugal innovation, mostly from the large urban centres of the developing world, the author shows how we can learn from these examples to invent radical solutions to contemporary problems everywhere. 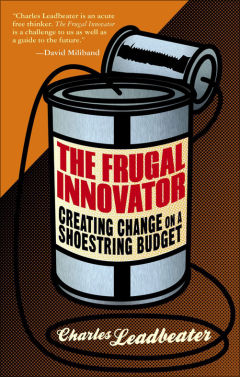 In the developed world, global capitalism is failing to deliver rising living standards for the great majority as the profits of growth increasingly accrue to mega corporations and a greedy elite. We, the ‘squeezed middle’, also need more frugal ways of living a good life.

And in both worlds, the expanding population must soon come to terms with the ecological limits to growth on the current model of globalisation.

Fortunately, the signposts to a better future are already visible in copious examples of a different kind of innovation, not so much in the shiny laboratories of Apple but rather in the back street workshops of Bangalore and Sao Paulo.

So, we can see lean production in the call centre and mobile ‘phone based primary health care system serving 5 million people in Mexico City. We can see simple design in the ‘balwali’ community schools in poor neighbourhoods in India where at about $10 per child per year, young women offer early education in local spaces with parental funding. We can see clean innovation and frugal systems in Havana where, after the fall of the Soviet Union, the city learned to feed itself through establishing many small market gardens using organic fertilisers. And we can see the social dimension of many of these innovations – people doing things for each other – in the mother-to-mother peer networks helping to combat HIV transmission in the Republic of South Africa.

At the core of frugal innovation are these four linked design principles: lean, simple, clean and social. Lean to eliminate waste in all its forms. Simple products which are easy to develop, use and maintain. Clean to minimise their environmental impact, treating waste from one process as an input to the next. Social in engaging consumers as co-producers, spreading delivery through networks and sharing costs among many users.

The new innovators are rooted in their communities and so can test what will work in real situations, but also cosmopolitan in connecting on a global scale. They also need to be, or work with, entrepreneurs who can shape organisational innovations, for example so that new products and their use spread laterally, and business innovations to make these products affordable, for example through ‘pay-as-you-go’.

In the developing world, this is the only way forward. In the developed world, there will be resistance to changing our wasteful ways, especially since the very rich will continue to encourage them. But again, there are working examples which show what is possible. The city of Freiburg has brought together low cost housing, energy efficiency, renewable sources of energy and excellent public transport so as to offer a good quality of life for most people, irrespective of income.

Here then is a potent recipe for a better future, providing only we can transform a lot of what passes as business to a more social purpose. Now is the time!

The publisher is Palgrave Macmillan.