“As the power of profession and service system ascends, the legitimacy, authority and capacity of citizens and community descend.”

“The citizen retreats. The client advances. The power of community action weakens. The authority of the service system strengthens. And as human service tools prevail, the tools of citizenship, association and community rust. Their uses are even forgotten. Many local people come to believe that the service tool is the only tool, and that their task as good citizens is to support taxes and charities for more services. The consequence of this professional persuasion is devastating for those labelled people whose primary need is to be incorporated in community life and empowered through citizenship.”

Thirty-nine years have passed since the Illich quote, twenty two since the McKnight quote. Both appear as relevant today as when they were first written.

What does it mean to be a citizen? If we consider citizenship as a political construct, being a member of a political community, it brings with it legal rights and privileges such as habeas corpus and the right of free speech.

In the United Kingdom, Citizenship denotes ‘...the exclusive privilege given to a member, also known as ‘citizen,’ of a particular state to exercise civil and political rights. Otherwise referred to as ‘nationality,’ the term vests rights and responsibilities to members under the laws of that country and entitles them to participate in its public life and affairs. Citizenship is both viewed as a privilege and an obligation since citizens are afforded rights relative only to their class and are obliged to render obedience to the laws of that particular state...

Citizenship involves rights and duties granted to British citizens. One of these rights is to permanently live in the United Kingdom. The right to live includes the right to leave and seek re-entry to United Kingdom at any time, without any restrictions on immigration. A British citizen is entitled to all the rights granted by the state to its members. Other rights under United Kingdom laws include human rights, right of privacy, right to receive equal treatment, and rights of workers. The other aspect of citizenship requires abeyance to the restriction of these rights as well as prohibitions enforced by the United Kingdom government.’ 3

We can, however, also consider citizenship as ‘...more than a legal destination. It is also a cultural ideal. It is infused with moral meaning, encompassed by normative principles, values and expectations that all derive from the social, historical and cultural context of the times.' 4

Whilst there is no single definition of community which is universally accepted, one useful definition could perhaps be a group of local people coming together to solve problems or share gifts and celebrate experiences. In this context, the power of both the individual and the whole is strengthened. Community associations tend to be small face to face groups who are interdependent within the community they create, flexible and responsive to the needs of people within the group. These associations within the community are inter-dependent, often sharing resources, overlapping and supporting each other.

“Citizenship is about making a difference. We do this better by getting involved and helping make our community a better place.”

Many disabled people are excluded from community. For many people with disabilities, paid work is the long term aspiration. Voluntary work is seen as a poor substitute. There is, however, an intrinsic value in volunteering which is not about money.

Volunteering is about giving, contributing, and helping other individuals and the community at large. It is working with others to make a meaningful contribution to a better community. There are many advantages to volunteering the results of which can be transformational. It can give a sense of purpose, reduce depression, keep a person mentally stimulated, offer an opportunity to make new contacts and form friendships. For those of us who provide support to other then may be the most useful thing we can do is help them become an active member of the community, and be valued for the contribution they make.

Jim and I first fell into step in 1998. He was just a bit of a lad in those days, 16 years old striding confidently through town, boom-box on his shoulder, heading to the local garage to purchase Coca Cola and crisps. We were sharing the pavement and walking in the same direction when we literally bumped into each other on the garage forecourt. He looked at me sideways, avoiding eye contact and giggled nervously. He probably forgot all about me immediately, but I couldn't get him out of my head. It was the strange mixture of confidence and shyness, and the fact that he was wearing his pyjamas. It was August and it was hot. This summer of 2016 in Vogue high fashion magazine, striped pyjamas and silk dressing gowns as day wear were all the rage, but in 1998 covering yourself from head to toe and stepping out in something called nightwear was definitely in danger of being classed as deviant or provocative behaviour.

Jim and I didn't fall into step again until almost two years later when he arrived on the doorstep of a residential home that I was involved with. It was early evening, he arrived angry and confused in his striped pyjamas with his beat-box on his shoulder, followed by a social worker with a black bin liner containing his belongings. We walked around the residential home together.

Over the following years he fought hard to get the life he wanted. It started off with the small things which we all take for granted: opening his own post, a home of his own, asking the people supporting him to take their shoes off before walking on his new carpet, a large screen TV, a dishwasher, a mobile phone, a computer. A headstone for his father's grave. Then he fell in love and I was privileged to support him and his fiancée to plan their wedding. As the marriage vows concluded he turned to a packed church, punching his fist in the air and shouting with joy "I did it!"

Over the following years he spoke at seminars and gatherings of professionals, Partnership Board Meetings, anyone willing to listen, about his good fortune. He was generous with his time and eager to tell people about the great things happening in his life.

For the next 7 years the marriage was a great success. They invited friends for dinner, organized outings, and were at the centre of the social scene in their community, until sadly his wife, the love of his life and constant companion, was diagnosed with dementia and slowly began to withdraw from him into a world of her own. Once again he was angry and confused.

The system failed both him and her tragically and dramatically. Jim had no notion of what was happening and why. All he knew was that he missed his wife and that he loved her. Within days of a difficult review a decision had been made. Jim and I walked in step to the divorce solicitor, we wept together as the solicitor explained the stark reality of what was happening. He thought he had done something really bad. He was devastated. It was difficult for him to explain in words what he was feeling, but the people who supported him saw his grief and pain and we all struggled to help him through it.

Over the next year he learned to live alone again, to pick up the pieces and rebuild his life. He made connections with his community, threw himself into voluntary work, and something miraculous and wonderful happened.

As he became more involved in his work in a local charity shop, the people working with him saw his gift of bringing his joyful energy into a room, his enthusiasm for the smallest of plans and schemes, his mischievous sense of humour his willingness and eagerness to be an active part of the team.

As Jim's network of friends and co workers in his voluntary work has grown, his natural optimism has returned. He posts photographs of his new life on Facebook and he needs us less and less. Once again he has a private life, with his own friends, people who enjoy his company and are not part of any support organisation, but who collectively have formed the most powerful unpaid support network.

It would perhaps make us feel good about ourselves as a support organisation if we had made these things happen for Jim, after all he needs us to support him in many aspects of his life. The functional things, cooking, cleaning, budgeting, healthcare needs, creating accessible information, sometimes with spoken communication, travelling on public transport or getting around in unfamiliar places, less and less in the area of emotional support. In the matter of his friends, colleagues, social network, he has taken control. His diary is full, he is accepted and valued for his contribution to his community. His life is rich and full of promise. Jim has faced situations which would have destroyed a lesser person with stoicism and courage.

We hear much about the importance of paid work for the people we support. Voluntary work is seen as less than valuable, however, being able to say that you are a citizen who takes an active part in the life of your community is an empowering statement, which conveys a sense, of both giving and belonging.

On being a valued member of his own community in John’s own words:

“Brilliant’ fill in a form. New boss called Alice very nice manager. Help me sometimes me stuck ask her help me on till. Give money, bills to take to bank."

“Christmas dinner soon. Bistro me and work colleagues, work friends. Get a badge, ID badge, and a T-shirt. Don’t get bored like do that job. Keep that job. Get bus in morning. Stay all day. Like it, people are nice they laugh. Give me nice cup of tea. The money for helicopter. People not well, take him to hospital.”

John’s words with their power and authenticity are a timely reminder of the importance of supporting people to make the valuable links which ultimately free them from controlling systems which can trap them in helplessness.

Citizenship will only ever exist as a political construct, not a cultural ideal, especially for people with disabilities, if the opportunity to step outside the ‘system’, to share gifts and be valued as equal citizens is not supported.

Associations and the community they create, develop the opportunity and voice within which citizenship can be expressed.

“...the community of associations provides a social tool in which consent is the primary motivation, interdependence creates holistic environments, people of all capacities and fallibilities are incorporated, quick responses are possible, creativity is multiplied rather than channelled, individualized responses are characteristic, care is able to replace service, and citizenship is possible.” 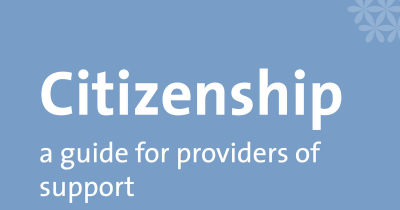 Citizenship: A Guide for Providers of Support Sam Sly and Bob Tindall have written a new guide for providers of support working to develop true citizenship for all.
Film: 14.11.14

Keith Achieves Citizenship Keith has been able to move away from institutional living and achieve real citizenship under his own control.
Film: 15.05.16

Andrew's Passion for Cars Andrew has a learning disability and a passion for cars. This short film gives an idea of how following this passion…