A Strategy for Welfare Reform

The welfare state was established after the cataclysms of the Great Depression and two World Wars and designed with paternalistic and industrial assumptions about how to achieve social justice. It was a great social achievement, providing important securities in the provision of health care, income, housing, disability support and education. Yet today the design of the welfare state is out of date.

Too often the welfare state:

For many of us the welfare state is not a poverty trap, but a poverty net - not encouraging to give the very best of ourselves: 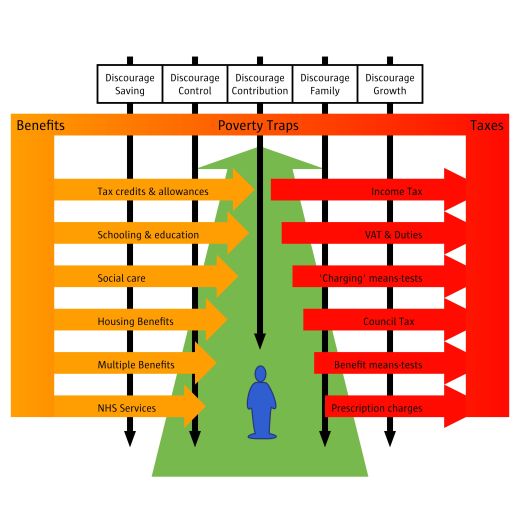 This an international problem. Despite some interesting differences welfare systems, across the Western world have been designed within the same paradigm - the Professional Gift Model - which sees social problems in terms of needs which must be met by the state or by the professionals that the state employs: 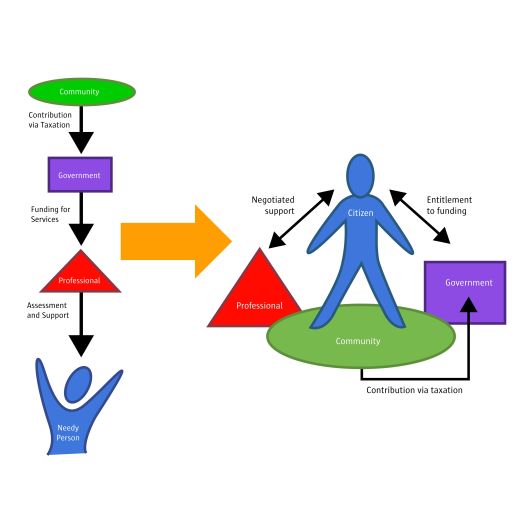 But we do not need to accept this out-of-date approach to welfare. It is not socially or economically viable to frustrate human and social development in this way. It does not help people to be good citizens, to act responsibly or to make a useful contribution. Instead this paternalistic and inefficient system is in danger of creating more of the social problems that it sets out to treat. Growing numbers of people find themselves unable to work or maintain their families; too many are being lost to crime, drugs, mental illness or hopelessness.

The welfare state needs to be radically redesigned. Not to be abandoned - but to be refreshed and reinvigorated.

There is a long history of individuals and organisations advocating radical change to the welfare state. There is nothing new about identifying flaws within the welfare state. The challenge is to identify a feasible process by which those reforms can be realised - living within political and economic realities.

The obstacles to reform are considerable and cannot be underestimated:

1. The welfare state absorbs over 40% of Gross Domestic Product (GDP) - this means there are significant economic vested interests committed to sustaining the current system and opposed to reform

2. Democratic politics is highly competitive and focused primarily on a relatively narrow range of middle earners - unsurprisingly the worst aspects of the welfare state tend to be focused on the most needy and upon the more marginal groups.

3. Significant social and policy change requires a degree of long-term thinking - analysis, solution and meaningful implementation - which is inconsistent with the short-term focus of the political process.

4. Accountability for the current system and its supporting policies is lost within a triangle of busy politicians, competing think-tanks and neutral civil servants - all agree that the current system does not work; but it turns out that it's nobody’s job to fix it.

5. Real change and innovation is carried out at great personal risk and it is rare for anyone to successfully champion innovation - innovators stay at the margins.

All of this means that the current system can seem almost completely immune to innovation or reform. However some innovations have been successful and reform must be possible. The development of Individual Budgets happened outside government and was promoted by disabled people, families and local leaders. Its success depended upon its pragmatic effectiveness as an innovation and the clarity with which the innovation was communicated. It was not a policy but a technology - and technological innovation can happen without official sanction. There is always more room for bottom-up improvement than we think. 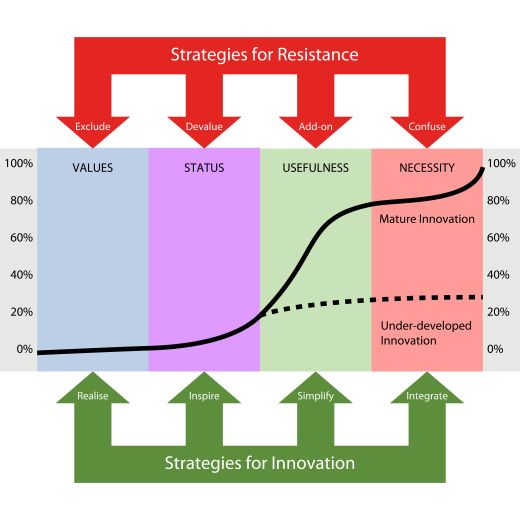 Radical reform will require a strategy that can overcome the immunity of the welfare state to innovation and the Centre for Welfare Reform has been designed with this purpose in mind.

The Centre for Welfare Reform’s strategy presumes that radical reform will require:

1. Deeper understanding of the problem - This will require a sustained and coherent effort to draw public attention to the flaws of the current system and the need for reform - outside the framework of partisan politics.

No change will be possible without a strong sense of the injustice and incoherence of current arrangements.

2. Agreement to the principles for redesign - More important than new policies and services will be a clear and coherent account of the new principles and constraints within which any new system will be developed.

Forming these principles is not just an intellectual challenge - it will require the creation of a new community of policy leaders who can ‘agree enough’ on what they are trying to do and can operate within their own organisations and leadership roles.

3. Building practical solutions - New systems will need to be based upon real innovations that can be reproduced on a larger scale. Many of these innovations exist, but many need to be further developed and expanded and some of these new approaches have not been tested.

Again the challenge here is not just theoretical - new models are developed or implemented by real people, leaders who need supporting and sustaining in a hostile environment.

4. Realistic implementation - Even the best ideas can be destroyed by poor implementation - where it is possible to lose focus on the real innovation that is being implemented or put in place processes which encourage the corruption or exploitation of the innovation.

The reform strategy will require a realistic implementation strategy.

5. Sustaining the reforms - Beyond implementation is the question of how the political and governmental systems which sustain and protect the current welfare system will support any redesigned system. This will require constitutional thinking - putting in place institutional measures that will protect people’s rights and will help ensure that the state will operate with self-discipline and integrity in managing and improving the welfare state.

It is also important to ensure that the reformed system is designed to leave room for on-going innovation and improvement.

The Centre will work to develop this strategy and to support a network of leaders committed to real change.

Much of this is possible to achieve from the grass roots. However some changes will require a deep and genuine shift in the thinking of busy politicians, journalists, civil servants and policy-makers. Often change is corrupted by these groups, who latch on to the latest idea simply to gain legitimacy. However some changes are political and require fundamental shifts in thinking and organisation. Supporting those leaders who really want to understand what is necessary will be fundamental to our work.

Real Welfare Reform Real welfare reform is about designing a welfare state that ensures everyone gets the support they need to live good and…
Slide: 17.06.11

Citizenship Theory A paper which explores the theoretical foundations of personalisation.
Article: 03.03.12

Who Really Benefits from Welfare? Simon Duffy looks at how the tax benefit system really works and wonders who are the real beneficiaries of this system?