Mark believes that powerful and active citizens have to be central to any action to improve health or reduce health inequalities; with a strong focus on the social determinants of health and accountable local leadership with the voluntary and community sector playing a key role.

Mark has worked in the voluntary, local government and national government sectors for quite a long time! In the 80s working for the Federation of Lewisham Tenants and Residents he ran a successful campaign to remove asbestos from council housing - much of this based on the inspirational work of Alan Dalton - his book Asbestos - Killer Dust - led to tenant campaigns across the country.

Whilst working for Sheffield City Council in the late 1990s Mark worked alongside carers of older people with a learning disability to establish the then unique carer led service Sharing Caring. Later as the Healthy City Co-ordinator for Sheffield, among other things, Mark founded the successful Chance to Dance Festival an annual street dance festival that has become a major part of the Sheffield Festival Calendar and is now in its second decade.

Mark also established two significant programmes whilst working for the Regional Public Health Group in Yorkshire and Humber. The first, a collaboration between local authorities in the region to reduce health inequalities - Minding the Gap. The second a £7million BIG lottery funded initiative - Altogether Better, which was developed in partnership with all local authority areas in the region. It has so far trained over 11,000 health champions in some of the most disadvantaged communities. It is not prescriptive; participants have moved on to become activists, volunteers, and to further training and employment. It is now developing community led service models to help people manage diabetes and increase the use of initiatives such as NHS Lifecheck.

Most recently Mark led a successful national strategy for the Department of Health driving forward the development of local Joint Strategic Needs Assessments. Central to this was a strong collaboration with Local Government Improvement and Development and the Voluntary Organisation Disability Group.

Mark now works as a freelance public health policy implementation expert. He is a Visiting Professor at Leeds Metropolitan University, a Fellow of the Faculty of Public Health, Chair of Sheffield Mental Health CAB and a national trustee for Citizens Advice.

Read Mark's blogs on his website: Local Democracy and Health. 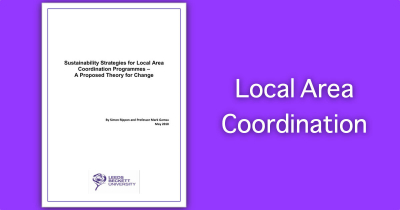