Gary has been in the Self-Advocacy movement since 1984 and was a founder of the People First Movement in the UK when it began in September 1984. He is Co-Founder of Learning Disability England and a campaigner for people with learning difficulties, civil disability and human rights. He actively supports the rights of people with learning difficulties and promotes change.

Gary's work began when he started to challenge day centres, supported by John Hersov of Mencap. Everyone started to speak freely without getting into trouble. But people with learning difficulties were scared; service providers, parents and carers had a lot of power.

After being at the first International People First Conference in Seattle, Washington State, USA in 1984, Gary set up People First, London and Thames. He was President for 4 years. During that time Gary was still on benefits but used his money to pay for envelopes, stamps and writing paper and hand-wrote over 400 letters, 4 pages long. He was determined to see other Self-Advocacy groups set up around the UK.

Gary was then employed by People First, London and Thames as their first employee in 1988 and in the same year they had their first International Conference. Gary supported and set up People First, Norfolk in 1992 and then worked for Bristol and District People First 2000 as Training and Development Officer. Gary was also the television presenter of Life of Our Own for the BBC, a 10 part series about the lives of people with learning difficulties.

Gary is very good at speaking up at conferences, lectures, seminars and workshops, regionally, nationally and internationally. He has spoken in Brussels on the European Year of Disabled People and as a European representative on the United Nations panel in Alaska.

Ordinary Lives: Citizenship for All Exploring the challenges of achieving ordinary lives and citizenship for people with learning disabilities with…
Film: 07.01.15

Self-Advocacy Simon Duffy talks about self-advocacy and Gary Bourlet's work with and on behalf of the People First movement.
Webinar: 07.12.20 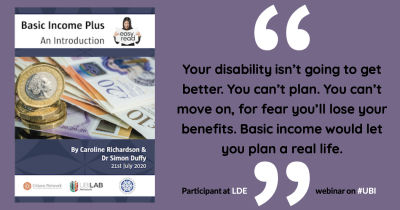 Does the Benefit System Work for You? Simon Duffy talks to members of Learning Disability England (LDE) about the idea of basic income as a way to reform the…