NHS Digital has published three reports which include the latest statistics on the safeguarding and care of vulnerable adults in England.

NHS Digital has published three reports which include the latest statistics on the safeguarding and care of vulnerable adults in England.

To read the reports visit:

"In 2015 the Government changed the data collection system for adult social care. The figures are now far more confused and it is harder to see the long-term impact of cuts social care. It seems likely that this was the real reason why the system was changed. Nevertheless the pattern is clear and the cuts continue. In 2009 1.8 million people received social care and this figure had fallen to 1.3 million by 2013 (a cut of 27%). Today we know that less than 0.8 million adults get long term care. Overall the cut in numbers seems to be somewhere in the region of 40% or even more. We have never seen such a severe cut to any vital public service, not have we seen such a significant failure of the political system to defend disabled and older people from this sustained assault on their basic human rights." 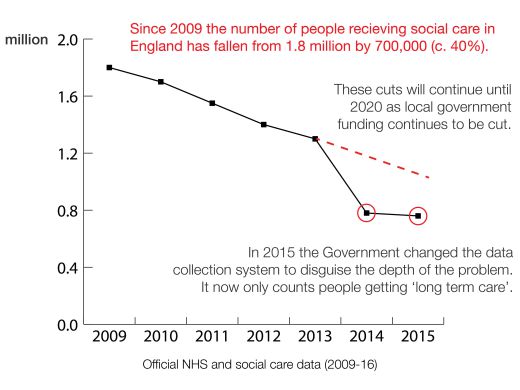