An Interview with Lou Townson

How did you get involved? 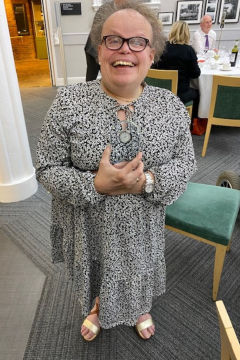 I remember going home and talking to my mum, she said give it a try, you don’t have to go again if you don’t like it.

The first meeting was learning about rights from Age Concern, and I met a lot of the guys who I still know.
It was a bit weird to start with. I’d been away at College and didn’t know many people. It enabled me to make friends. It helped to have my friend there when I started. Rohhss, Andy Docherty, they were all so welcoming.

To start with we didn’t have a base, an office, so most of our work was in Rohhss’s kitchen, kids might be there, you’d see the washing on the radiator. It was just so natural and homely. Somebody once spilled a cup of coffee all over the carpet. I was mortified but Rohhss wasn’t bothered.

I remember England People First down in Birmingham, the group that has been doing it just came in and dumped all the files on the floor. We’re not doing it any more. Where did that come from?

We used to do advocacy work at a long stay hospital, there was an elderly lady there and she was tied in her chair to stop her wandering. She was just rocking, why doing nothing? I’d never had that experience and some of what I saw appalled me, why is that happening. She liked to wander, staff said they didn’t have time but later I saw all the staff sitting there in the office drinking coffee, why are they having coffee, not doing their job? Where I live now some of the older staff say that’s just how it was then. I say, think of something else not that.

How did life change?

It changed a lot because when I’d come back from college, I saw no one other than the resettlement officer. Job Centre took one look and said I’d never get a job. I proved them wrong, because years later I became Women’s Officer. No one tells you do they? As a family we had to find our feet. We got a form asking us how we felt about the information the social worker gave about Direct Payments. We’d never had a social worker. My mum wrote back to say tell them what social worker? I said You can’t send that. My mum said I can. And she did.

Moving here, my mum was keen for me to get somewhere else to live because we had seen people in People First whose parents died and they were left in unsuitable accommodation, totally unsuitable. My friend had told me about this place. I asked her to ring my mum and tell her because it wouldn’t have the same impact coming from me.

I wouldn’t know as much as I know if it hadn’t been for People First. For instance, Rohhss asked us what care component I got. No one had ever told me I could get it. So she gave me the number and we asked a disability charity to help us, and we put Rohhss’s name down because she knows lots more about me than the doctor.

Best thing about self advocacy?

We went to a Conference in Australia. I’d always wanted to go. It was lovely. I’ve travelled a lot, Philadelphia, Sweden, Belgium a few times, and Milton Keyes as well.

I’m not sure about funding, things change because of the system. Like when PF’s funding changed they told us you’re not allowed staff phone numbers, take them out of your phones. But in PF we had always had numbers, I was told to delete them because the funding had changed. They never explained that. Now that has come back round again. I think it was a bit much when you had had those numbers for years. I did leave PF for a year because of it. Now it has come full circle, I didn’t like the way it was going, it was people I’d known for years. I was upset. It’s because it was changing from Lottery to local authority funding, and it was probably because it was new to everybody. Now we can have the numbers again.

We could all support each other. In meetings people would say Oh I’ve had that happen, I can help you.

I’ve been in meetings as a peer advocate but senior managers don’t recognise me, I often felt that I couldn’t say they had said things even if they had. An advocate without a label gets listened to more. A lot of the people where I live now say You are really good, you advocate for people, because I’ll go to a manager when I see someone’s behaviour has changed, I can be a voice for people who can’t speak for themselves.

I do go to PF Self Advocacy sometimes, but I do lots of other things, LEDER, Partnership Board, when it comes to bog standard self advocacy I’ll sometimes go, but I feel I’ve outgrown it.

Danielle: I get that you get the feeling the topics aren’t suitable, you’ve done it before.

I went to a group where they were watching a video on Whorlton Hall and what happened to the people there, and I went to offer moral support. There was a backlash from parents, but we wanted to make people aware. We’d watch a couple of scenes, then stop it, and discuss, and then continued. When I watched it I had my face covered, why is it happening again? Staff here said It made us cry. We come here to care. It was awful.

Speak up for me and others. Office jobs, money, IT, loads about research. I find with some research you’re only involved with a tiny bit, but I have learnt skills in that area.

How has it changed?

Dramatically. To start with it was just people meeting, lots of small groups. Lots of those have lost funding now. It’s more attached to a PF group, more joined up together now. I don’t think there is a lot of difference between People First and Self advocacy.

It was called the Kingstown Self advocacy group because it started in a Day centre with that name. When we went in staff though people would become difficult if they went. So they used it as a reward. If you behave you can go to People First today. ‘If you tie your laces you can go’. But he didn’t know how to tie his laces. I don’t think they took it seriously, I don’t think staff got what they were there for.

But we lost members when we met in the evenings. Parents didn’t want them going out at night.

There is more service funding now, before it was little bits but now they aren’t funding self advocacy so much as Care Act advocacy. The boss who is my friend told me if we want self advocacy we have to find money to pay for it. That’s not right I say. That’s how it is he says.

Unless you come into services you are dumped, if you don’t come into a bracket.

Looking at what people do we’ve got an academy now instead of a Day Centre, I think a lot of people are better off with the Academy, they learn to be receptionists, prepare the Conference room, make teas and coffees, lunches, they can get a qualification and then a job somewhere else. People need somewhere to go, not just always going to the same place.

When I first joined PF we had subs and people paid £1 a week for teas, coffees, etc. and now we have separate funding. Before they were not seen as a priority.

Achievements - seeing people progress, someone I know who never really spoke much, now she volunteers and she’ll speak up. I told her to vote in the election and she said I’m not voting, they don’t keep promises. I was taken aback. It was lovely to see that.

The publisher is Citizen Network Research. An Interview with Lou Townson © Lou Townson 2022. 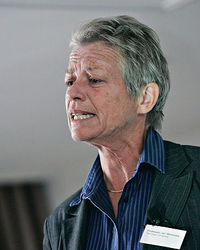 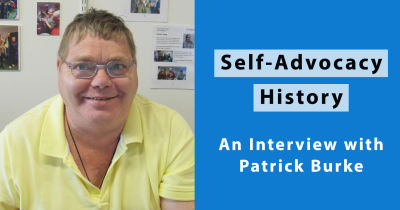 An Interview with Patrick Burke Jan Walmsley interviews Patrick Burke about his experience as a leader and an advocate in the self-advocacy movement.
Article: 13.10.21 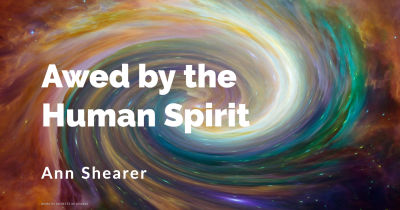 Awed by the Human Spirit Recollections of the early days of deinstitutionalisation and the emergence of self-advocacy by one of its pioneers.
Article: 15.09.21 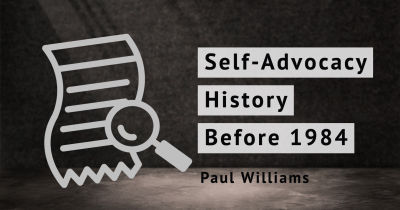 Self-Advocacy History Before 1984 The People First movement leads the way in self-advocacy today, but there were also earlier developments which should…
Article: 24.11.21 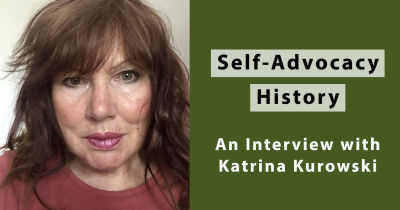