Sally Young has been Chief Executive of Newcastle Council for Voluntary Service (CVS) since June 2010. From 2008 to 2010 she was the Chief Executive of the Edward Lloyd Trust, a Newcastle-based charity supporting people with learning disabilities. Before then, she worked in and with the NHS for many years in a number of different roles promoting patient and public involvement in health.

Sally has worked in and with the voluntary sector for over forty years as a volunteer, campaigner, staff member and trustee. Sally lives in Newcastle and is particularly interested in tackling inequality and poverty with a focus on women, children, refugees and asylum seekers.

Sally talks about working in different worlds – her involvement in the voluntary and community sector at many different levels; a number of years being employed by the NHS and then working in an arms-length body; the world of politics – she spent twelve years as an elected councillor and is actively involved in women’s politics; and a short dip into academia (which was long enough for her). She often acts as a bridge between these worlds and sees how the different cultures and priorities cut across partnerships.

Sally is a qualified radiographer, has BA from the Open University, a Master’s Degree in Health and Social Research and a teaching qualification. She has produced a number of studies on the local voluntary sector in Newcastle and Gateshead as well as briefings on poverty and inequalities.

Sally sees herself as a campaigner and change-maker, and much of her activity has been around making things better and reducing inequalities. As a mother, step-mother and grandmother she is concerned by the impact of climate change and believes the structural inequalities within society, the growth of digital technology, and the fragmentation of communities will make life a lot harder for future generations

Sally tries to relax through being with friends and family (in particular her six grand-children), going on holiday, watching dance (she has two artificial knees), and watching ‘euro-noir’ on TV; an addiction which her partner fails to appreciate. She has lived in the North East of England all of her life and is regarded as a Posh Geordie. 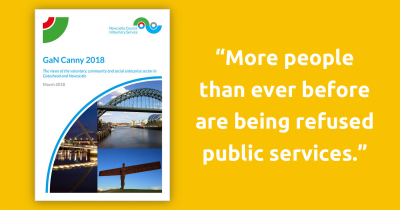 GaN Canny 2018 Over 168 voluntary and community organisations from Gateshead and Newcastle responded to a survey by Newcastle CVS on…
Paper: 23.10.19 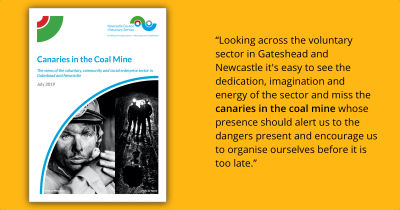 Canaries in the Coal Mine Newcastle Council for Voluntary Service (NCVS) share their 2019 report on the state of the voluntary, community and…