Independent researcher on the political impact of problems within medical research

George Faulkner is an independent researcher focusing on the political impact of problems within medical research. This is not what he intended to become.

In 2013 he was asked to write a blog summarising concerns raised by others about the PACE trial, the first clinical trial to receive funding from the DWP, and explain why these concerns were relevant to people interested in welfare reform.

What was expected to be two weeks of work led to three years of research and fact-checking, along with the grim realisation that the problems in this area were so serious and widespread that that no-one could hope to explore them comprehensively. 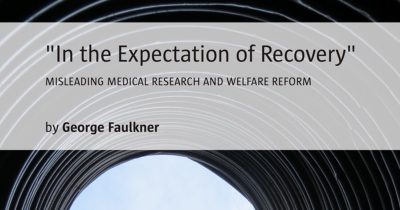 In the Expectation of Recovery George Faulkner's report outlines how misleading medical research has been used to support disability cuts.