Alastair has had a long-term commitment to tackle inequality, and support people to achieve their potential has always been one of my driving forces. A career that began with supporting people with Learning Disabilities moving to the community from long stay institutions, has led to a focus on positive change through disruptive innovation from both within and out-with organisations and with a wide range of people.

Alastair is someone who asks "What would it take for this to happen?" and then does his best to support that change to become reality. He is sometimes told he overestimates people’s abilities; but in his experience it tends to be existing structures and power imbalances that are the limiting factor. Alastair believes in bringing people with you and working together to make positive change - supporting people to let go of the fear of change.

In 2013 Alastair was introduced to the work of an organisation called Manavodaya by Pete Richmond, and following a residential course facilitated by it’s founder Varun Vidyarthi, he has been involved in a small way in supporting it and using its principles in the work he does.

In 2017 Alastair began working on a self-employed basis, Positively Minty, to build on the work he had been doing on a range of activities supporting sustainable change. 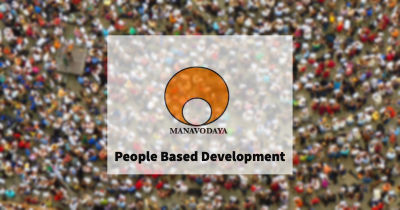 People Based Development Sharing learning on social change from the Manavodaya Institute.