Whitehall through the Looking Glass

The Consortium has brought America, which it practically owns through its corporate subsidiaries, back under the British Crown. In return, all it asks for is unfettered control over policy decisions in Whitehall.

When big corporations have taken control of the government, it’s time for regime change.

In this timid new world, nobody dares question the Consortium, and everybody is expected to carry out orders. But while many of his civil service colleagues jostle to be of the greatest service to their new political masters, Philip K. Rainsborough decides that enough is enough. He sets out to expose the Consortium’s dark secrets. Unfortunately, the Consortium has on its side the Super Utility Network, the most advanced opinion manipulation technology in the world. And as life for most people sinks into chaos and misery, the Consortium remains as popular as ever by serving up gimmicks and endless scapegoats.

To make things worse, a leading contender to become the top civil servant of the government is none other than his cold and calculating boss, who is poised to do anything to please the Prime Minister, and sabotage anyone who gets in the way of his promotion.

“Forget ‘Yes, Minister’ and ‘The Thick of It’; if you want a sharp satirical look at life inside the corridors of power, read ‘Whitehall through the Looking Glass’, written by a true insider... Tam’s novel also has a serious message about the dire consequences when corporations take over the running of a government. It should be read by anyone interested in the state of our democracy.” 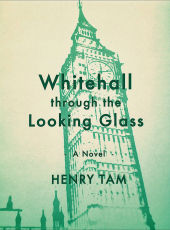