The Unmaking of Man

Disability and the Holocaust

Doctors argued that people with disabilities lived lives not worth living and lobbied Hitler to start a programme of euthanasia. The technologies and approaches developed were then transferred to the destruction of the Jewish people.

Dr Duffy explores the practical and theoretical factors that led to the Holocaust and the common experiences of people with disabilities, the Jews and other victims of the Holocaust. He uses this analysis to explore the current risks for people with disabilities including the on-going threats of eugenics, segregation, stigmatisation, poverty and rightlessness. Dr Duffy also explores the strategies necessary to defend people at a time of growing economic insecurity. 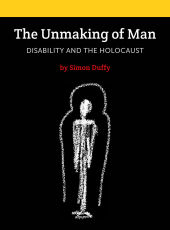